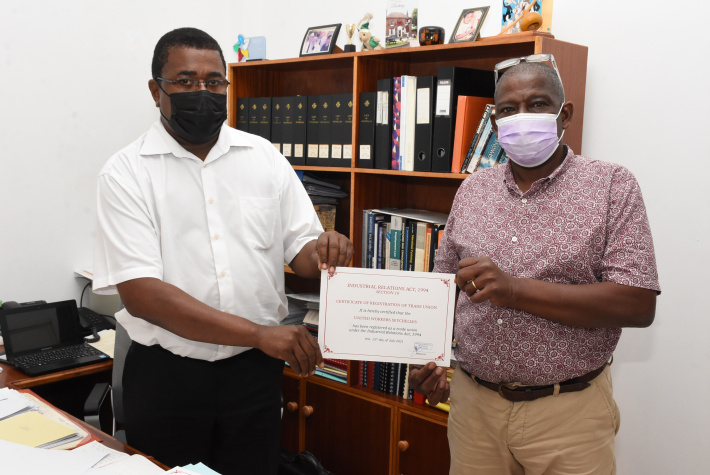 The United Workers Seychelles was certified as an official trade union yesterday afternoon after it received its registration certificate, officially giving it the right to start recruiting new members.

The official certificate of registration was handed over to the United Workers Seychelles (UWS) secretary generalEmmanuel Fideriaby the registrar of trade unions in Seychelles, Bernard Adonisin a short ceremonyat the latter’s office atthe OJ Mall.

Among those present to witness the moment were UWS treasurer Louisette Belle, secretary Rita Dogley, among others.

MrFideria said the UWS office is located on the second floor at Maison du Peuple and is open from Monday to Friday from 8am to 4am.

“We are already working and our office is now open with full time staff. This coming week we willlaunch our official Facebook page and we will have an email addressto guide people who wish to become members of this union at a fee of R150, valid for 12 months,” Mr Fideria explained.

He further stated that now that the UWSis alegal body, employees should not be scared to come forward as the Seychelles Constitution and the EmploymentAct give all employees the right to join a union. He encouraged employees to come forward to join the union that will help them defend their rights.

“Sincerely the government is not here to act tough, employers are not here to act as strong characters and the union is not here to create disorder. We are a tripartite and ready to work together. As a union we will in the future seek to work with other unions where we can form a federation with the same objective to defend and educate employees,”MrFideria pointed out.

The aim of setting up the UWSwhich falls under the umbrella of the United Seychelles party(US) is to serve as a voice for Seychellois workers who feel they are beingvictimised by their employers, precisely with regards to their salaries and working conditions.

Commemorating the International Day of Nurses |13.05.2022