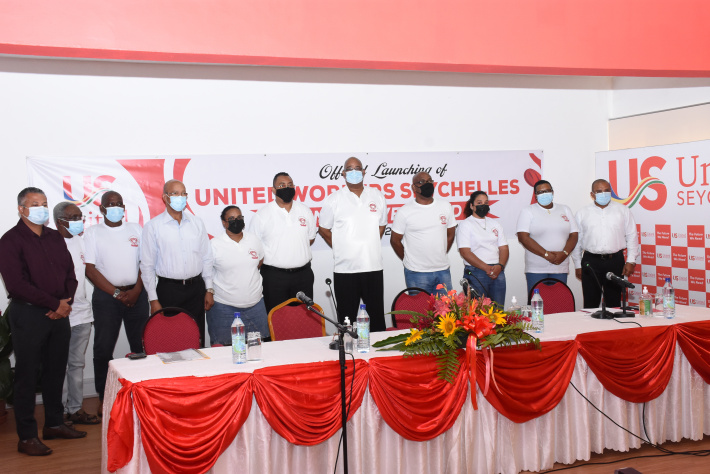 The union’s executive members in a souvenir photograph with some party officials (Phoot: Louis Toussaint)

The United Seychelles party has launched a new workers union under the name United Workers Seychelles.

The United Workers Seychelles will serve as a voice for Seychellois workers who feel that they are being victimised by their employers.

He added that the union is even more relevant now faced with the realities of Covid-19 where many workers are finding themselves being laid off.

Dr Herminie also touched on the new International Monetary Fund (IMF) reform and the new changes in the employment act that was announced by the government this week, noting that it is evident many will end up without a job or a salary.

“It is becoming a norm that many Seychellois workers are treated as second class citizens in their place of work and when these frustrated workers react to their mistreatment they are labelled as lazy and uncooperative, which is why it is the duty of the new union to fix this issue,” Dr Herminie said.

The party leader added that the union will help everyone, no matter what political party they are affiliated to. He even noted that some members in the union may not necessarily support United Seychelles but they do support the United Workers Seychelles.

The union’s chairman, Laurent Moumou, noted that just because the union falls under United Seychelles does not mean that it will be used for political gain.

Having said that, he added that we are living in a crucial time where we are seeing many Seychellois being affected by redundancy.

“This is not affecting members of our party only but of others as well,” he said.

He said the union is not there to encourage revolt; on the contrary it will serve as a way to minimise tension and show workers that there are other ways to solve their problems besides staging a strike.

In order to promote the voice of workers, Mr Moumou is encouraging other trade unions in the country to join them in their efforts, adding that since United Workers Seychelles has been founded by United Seychelles this will give them an advantage as they will be able to take issues they encounter to the National Assembly.

“Every government is bound to listen when the population voice their concerns which is why we want to intimidate the government and remind it that it is there to protect the rights of its citizens,” Mr Moumou said.

He said the union is in a recruitment phase, but when this is done they will set up a plan and start consultations with workers to be able to make demands.

During the ceremony the board of the union was also announced. Mr Moumou will serve as its chairman with Jerry Sopha serving as vice-chairman.

Jerry Sopha, vice-president of the union, noted that even though he does not form part of United Seychelles, he decided to join the union when he was approached as he believes in the ideology being brought forward by the union. 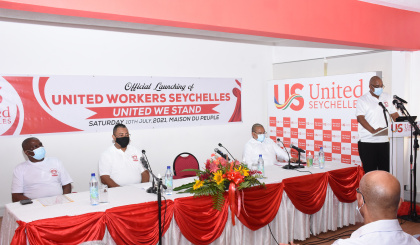 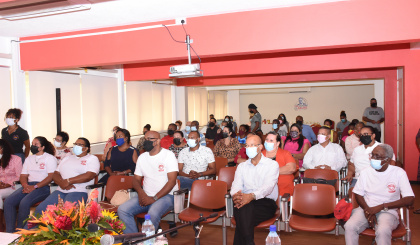