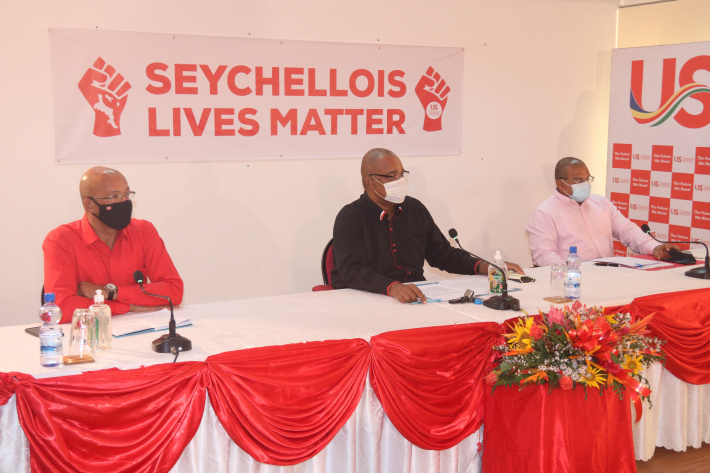 Opposition party, United Seychelles (US), has criticised the actions and inactions of the current Linyon Demokratik Seselwa (LDS) government since it secured executive and legislative power through elections in October last year.

These past eight months, according to the US party leader Dr Patrick Herminie, have been anything but stable for Seychelles due to cuts to certain social safety net programmes and a surge in Covid-19 cases that has now almost reached 13,000 as well as Covid-19 related deaths that are gradually rising.

In the United Seychelles’ sixth press conference yesterday, Dr Herminie stated that the government has taken less than a year to fail the people of Seychelles after it mishandled the Covid-19 situation, placed the interest of large business and the boost in the economy over the socio-economic well-being of the country among other criticisms.

Dr Herminie further noted that the government has “lost its direction” and lacks consistency.

“We have a government that finds that it is easier to oppose than it is to lead,” added the party’s deputy leader, Jacquelin Dugasse.

The opposition party is calling for an independent investigation in the management of Covid-19 which it proposes is undertaken by a commission that will include representatives from the US, One Seychelles, LDS, a foreign epidemiologist, a representative from the World Health Organisation, under the guidance of a judge.

“These eight months have been nothing short of a disappointment thanks to a government that is stuck in the past. Over 12,000 of our citizens have been affected by Covid-19 and almost 50 have died because of the government’s interference in public health. Nothing concrete has been achieved, a large segment of our population is in poverty, children are going to bed hungry, the cost of living keeps on increasing, and this government hopes to make us believe that it will lower the cost of living by placing trade primarily in the hands of large businesses,” claimed Dr Herminie.

“The US has brought various propositions to help curb the spread of Covid-19 but they have not been taken seriously which is why we left the platinum committee. If they had listened to us, we would not be in this mess right now. Our decisions were based on science and public health facts and this is how we differ from LDS. LDS is running after money but we are trying our best to save lives,” said Dr Herminie.

“In 2020 when the pandemic started, there were only 668 deaths in Seychelles which was a reduction from the four previous years which shows that the US was a government that placed its people at the centre of development.”

Much like in past press conferences, Dr Herminie criticised the handling of the Covid-19 economic and social impacts whereby he alleges that the unemployment situation is “deplorable” and the government was wrong to remove the social welfare safeguards that would have supported those who are unemployed or those who are finding it hard to make ends meet.

Mr Dugasse also noted that the LDS government has not shown thus far that it has a concise and innovative policy for the economy and has not removed obstacles that hindered ease of doing business, as they had promised while in government.

Instead the new government has touted the benefits of traditional sources of income for the country such as tourism and more recently has pushed for the revival of the old cinnamon industry rather than diversify the economy.

Mr Dugasse continued by stating that the government should have been looking to improve the offshore sector and to relax policies that will provide ease for doing business and cut the costs of doing business.

“We were expecting a clear policy on how to diversify and exploit our fishing industry to its maximum[...] In regards to the third pillar of the economy, the offshore sector, we were expecting the government to remove the obstacles that have placed us on the list of non-compliance so that this sector can thrive and create wealth for our country,” stated Mr Dugasse.

He further criticised the fact that the LDS government had not sought to downsize the top heavy government which it had once been opposed to.

“We are now becoming more and more dependent on tourism, all talks are on the tourism industry instead of diversification when we know that our main market, Europe, has dropped by 77% so does it make sense for us to keep depending on tourism?,” remarked Mr Dugasse.

In regards to the abrupt end to the 1000 daily snack packs for school children promised by the US, Dr Herminie explained that the Ministry of Education can easily make use of its vehicles to distribute these snack packs but chooses not to.

He noted that the US is unable to do so due to the fact that it only has one car.

Dr Herminie added that the government had initially welcomed the lunch pack initiative thinking that it was calling the US out from its bluff but now is backtracking after the US followed through with their promise.