Efficient service-delivery,working towards a dynamic economy with equal opportunities for everyone and protection of state sovereignty are but some of the priorities of the Linyon Demokratik Seselwa (LDS) for the next five years, should it be elected to the executive in the upcoming general elections.

LDS, who is running for both the Presidential and National Assembly elections in 25 days, presented the party manifesto during a ceremony at the STC conference centre, yesterday evening.

Party leader Roger Mancienne launched the presentations by affirming LDS’ commitment to strive and work guided by the principles of democracy, truth, good governance and in the consideration of the well-being of citizens, communities and society at large.

Among its priorities, he says, is to help Seychelles surmount the Covid-19 pandemic and the economic downturn resulting from it, to improve the quality of life of each and every citizen, to empower societies to be more resilient to resist social ills, and to invest in the youths and help them realise their dreams.

The manifesto features a picture of both presidential candidate Wavel Ramkalawan and running mate Ahmed Afif on the front cover, both of whom Mr Mancienne described as “strong leaders who have won the hearts of Seychellois”.

In line with the motto, ‘Sesel pour tou son zanfan’, Mr Mancienne further asserted the party’s vision to motivate every citizen to work hard towards the betterment of their communities and the country, by including and listening to citizens, on matters affecting them and the country in general.

The manifesto and its provisions were further unravelled in detail by numerous members of the party, namely Simone De Comarmond who addressed plans for improving the quality of service within the public service with focus on the training and development of civil servants, as well as the vision for the education and health systems.

Vice-presidential candidate Afif spoke at length about the economy, the tax regime, and LDS’ vision to transform fishing and agriculture into top industries and encourage investment in the domains.

Last but not least, presidential candidate Ramkalawan presented the principles to which the LDS government, if elected into office, will work by.

He addressed rehabilitation of recovering drug addicts, affirming LDS’ commitment towards ensuring that law enforcement agencies are effective and efficient in the battle against drugs.

“LDS wants to transform our country. LDS wants to do things differently. Our battle is pushing for the interest of each and every Seychellois. Even if we have not covered everything, as a government, we will have to tackle everything. Of course some are bigger than others and more urgent but we have the determination and energy to look into all these matters,” Mr Ramkalawan concluded. 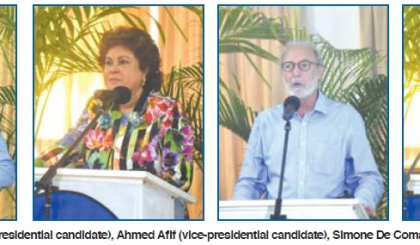