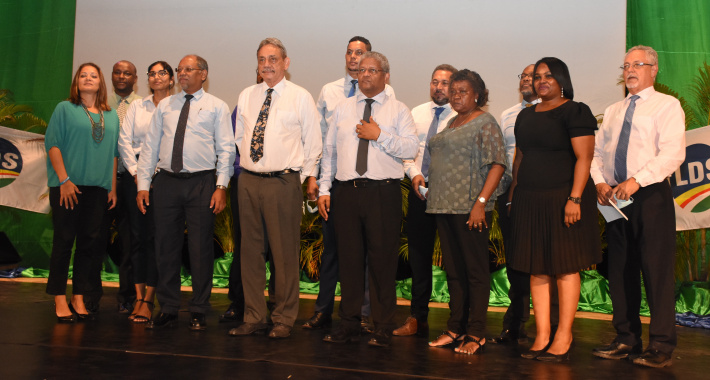 Saturday’s convention at the International Convention Centre Seychelles (ICCS) was held under the theme ‘Committed to this transformation’.

Roger Mancienne remains the party leader and chairman of the committee, while the new secretary general is Gervais Henrie and Devika Vidot is the new treasurer.

Amid the ongoing health restrictions due to the Covid-19 pandemic, attendance had been restricted to a limited number of delegates.

In his acceptance speech, Mr Mancienne thanked all the members for putting their trust in the new executive committee.

“It is an honour to get the trust and appreciation from people while being the leader of the party. I will need your support, your solidarity and your trust to bring forward our party. Being the leader of the party for the past years, taught me how sensitive and delicate this post is. The biggest challenge is to keep the party as an organisation that functions, listens and tries its best to bring forward propositions and conduct activities that will reinforce the party,” said Mr Mancienne.

In the delivery of his special address to the convention, President Wavel Ramkalawan congratulated the newly elected executive committee and right at the beginning noted that the number of men and women being voted is not balanced and suggested to the committee to co-opt female members.

He also thanked all the outgoing office bearers.

President Ramkalawan also stressed on the fact that this is the first time he was addressing an LDS congregation after their victory in 2020 in both the presidential and National Assembly elections.

“The task of the newly elected committee is enormous, but I am sure under the leadership of Mr Mancienne and the support of the VP (Ahmed Afif) and myself, they will be able to carry out the job. We know exactly where we are going as a party. I remain LDS and it is under this banner that I will bring democratic changes in the country. This is why now everybody has the chance to talk and express themselves freely. As a supporter of LDS, you have the right to say that you do not agree with what is happening. It is actually healthy to have this within the party. When something is not clear, please ask questions – first to your MNAs. ‘Travay I la’ and even though things are tough we all have to persevere and work for the country. Together we will work towards transforming our country and our society. The transformation will happen with the way we think and talk to people,” said President Ramkalawan.

He concluded his speech by thanking all the activists and people who voted for a change.

During the convention seven resolutions were adopted:

Flory Larue presented the constitutional amendments of the LDS party followed by the election of the executive committee.

In the second part of the convention, Bernard Georges talked about land allocation for political parties; Mervin Cedras spoke about the ‘Call for youth’; and Gervais Henrie talked about the party in transformation. Those were followed by a questions and answers session.

The convention was attended by First Lady Linda Ramkalawan, ministers of the current administration and activists from all districts. 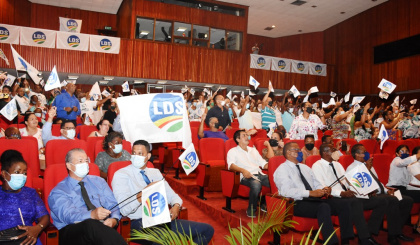 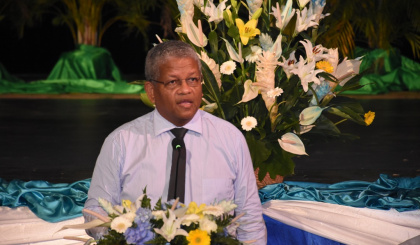