US calls for R2000 raise in salary, thirteenth month pay and support for small businesses |18 September 2021 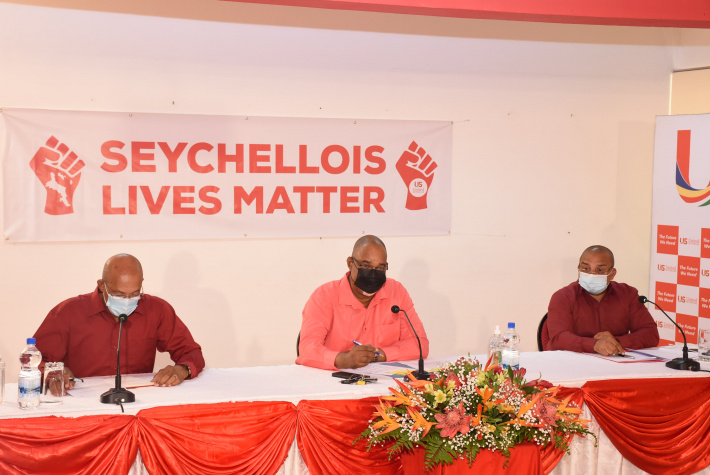 The leader of opposition party United Seychelles (US), Dr Patrick Herminie, has called for a salary increase of R2000 across the board for all Seychellois, from the R1.2 billion savings on the budget.

Dr Herminie made the call during the party’s ninth press conference held yesterday.

He noted that as per the party’s calculations, government can afford the R2000 pay rise, thirteen month salary payments for public servants, as well as to assist smaller businesses to do the same for their employees.

He went on to highlight that unemployment is at its worst with many youths still being unemployed following the termination of the Unemployment Relief Scheme (URS).

Dr Herminie further noted that the cost of living continues to rise, proposing that the administration and Linyon Demokratik Seselwa (LDS) government have failed in diversifying the economy as promised, with economic performance at zero.

“US will continuously denounce the bad decisions and policies of LDS, because we firmly believe that the standard and quality of life of our people is not negotiable. US left behind the highest ranking education system in Africa, the most transparent Office of the Auditor General in Africa, and the highest Infrastructure Development Index in Africa and this is measure of our investments in housing, electricity, sanitation, among others,” Dr Herminie stated, noting that the statement that LDS inherited a ‘broken carriage’ is false and unfounded.

With regard to the Covid-19 situation in the country, Dr Herminie stated that the US has four main problems with how the situation is being handled by government. He pointed out that the rights to protection under the law are not being upheld, with differential treatment for certain individuals and groups in relation to health and safety measures and protocols in place. The party is further concerned with the efficacy of the Sinopharm vaccine which was administered to the general population, whether the population will now be revaccinated with the Pfizer vaccines.

As for the vaccination of adolescents which is presently ongoing, Dr Herminie argued that there is a lack of clear information for parents, going further to demand a liability clause in the consent agreement. Additionally, he said he was disappointed with how health workers are being treated, as they face allowance cuts, and other incentives have been phased out.

Mr Dugasse requested that the government be more transparent and accountable with regard to Air Seychelles and how the employees will be sustained and about the macroeconomic reform programme of the International Monetary Fund (IMF).

For his part, secretary general Dick Esparon conveyed his perspective that the present administration has adopted a piecemeal approach which fails to detail how the agricultural sector can be revamped.

“What is clear is that there are piecemeal measures being taken one after the other, but together is not a multi-sectorial approach. It does not paint the picture of how the agricultural sector can be impactful, and how all other sectors stand to benefit from agriculture,” Mr Esparon added.

The secretary general asserted the realisation that resources should be invested into agriculture, noting that no elaborate strategy has been communicated to the nation as to how food security is to be improved.

Mr Esparon also highlighted the importance of government stepping in to help reduce dependability on importation, so as to ensure that smaller famers and businesses can also benefit.

The leaders also addressed questions relating to victimisation of US supporters to say that such is rampant within the public service.

They further called for the government to step up and address cases of corruption, in a fair manner, and to keep the population informed on the progress made in important cases, such as that of the lost $50 million (USD).

Commemorating the International Day of Nurses |13.05.2022