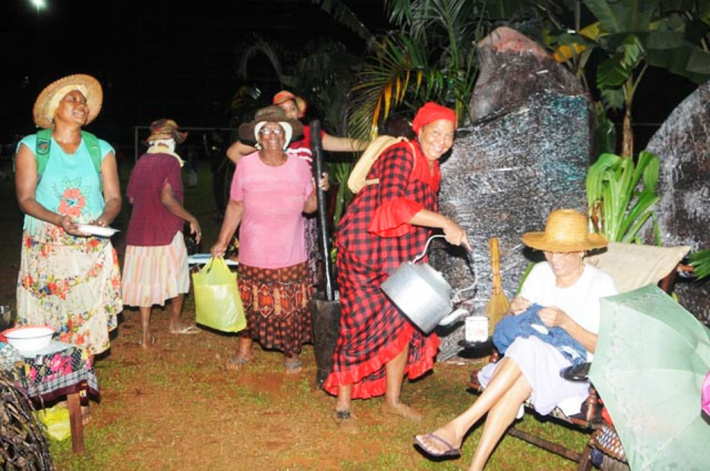 Unesco has declared this year’s theme for International Heritage Day ‘Complex Past…Diverse Cultures’. On behalf of the National Heritage Research Section TONY MATHIOT explores the convoluted landscape of our history

So, just how complex is our past? Well, the mindboggling irony is that most of us wouldn’t be us if it was not for the Indian Ocean African Slave Trade of the late 17th and early 18th century. In other words, we are the corollary of abhorrent circumstances. We are the consequences of those ignominious circumstances. The Seychellois people came into being at a time when Imperial rivalries and Colonial expansionism set the world order. We must have a sober reverence for this intrinsical truth. Of course, slavery is condemned by the dictates of our conscience, while not repudiating the fact that it made us what we are – and are we not grateful and proud of what we are?

As of 1770, French settlers from Isle de France arrived in Seychelles with their African slaves. From then on slaves kept arriving in various numbers on various ships. On May 3, 1807, slaves arrived on board L’Aimable Marianne. In March of 1807 Courier des Seychelles brought 140 slaves. In April of 1809 L’Etoile brought 150 slaves from Madagascar. While most of the slaves were taken to lucrative markets in the Mascareigne islands, some were retained for plantation labour and domestic work and became the founding families of some of today’s generations. By 1790, the population of Seychelles was 572 inhabitants: 507 slaves, 65 white settlers. In the following decades, these figures would increase significantly as more French immigrants from Isle de France and Bourbon arrived to take advantage of the 1787 Malavois Regulations which inter alia offered ‘cent huit arpents’ to those who wished to come and settle in Seychelles. So they came: Mondon, Conan, Petrousse, Houareau, Etienne, Renaud, Parnel, Mussard, Savy, Nageon de L’Etang among others. On December 23, 1790, caught up in the euphoria of the French Revolution, some 10 white settlers formed a Colonial Assembly and declared Seychelles an independent state, insisting that only the children of the inhabitants should be entitled to own land in Seychelles – of course this did not include the children of slaves! Autonomy and Independence would come 186 years later, because on August 1, 1791 the Republican French Flag was unfurled on Seychelles soil with the cheers of ‘Vive la Nation, La Loi et Le Roi’. Seychelles was then two decades into its ‘French Period’. By 1811, eleven years after the First Capitulation (1794) when the British took possession of our islands, interbreeding among the black and white population, that is, between the slaves and the French immigrants had already produced the Seychellois creole people. This was not in conformity with the Code Noir which expressly prohibited the cohabitation of African Slave and French slave owner. So then, the origin of the Seychellois creole people can be construed to have been a crime. A violation of a law. Complex, is it?

On February 1, 1835 when the Abolition of Slavery came into force in the British Colonies, 6521 slaves were emancipated from a total population of 7500 inhabitants. They were: 3924 Mozambicans, 2231 creoles, 282 Malagasies, 3 Malayans, 38 Indians and 43 slaves of unknown class. Miscegenation that included interbreeding among the creoles, the blacks and the whites seemed to have produced every permutation of the creole characteristics and physiognomy from the blend of races. Let’s not forget the Liberated Africans who were rescued from Arab dhows by ships of the Royal Navy, of which the first batch arrived on May 14, 1861 aboard HMS Lyra. Between 1861 and 1874, close to 3000 liberated Africans were brought to the sanctuary of the Seychelles. Many were given British names: Bristol, Brown, Johnson…and all were assigned identification numbers. Social division between the Plantation aristocracy and the labouring class were negligibly subtle before the arrival of religion – Anglican (1840) and Catholic (1851) on our shores. After that, as the evangelical zeal of the two denominations vied for the souls of the pagan inhabitants, it gradually became evident that there was a fissure between the two churches that could potentially aggravate into outright antagonism. During the last decade of the 19th century, the inhabitants, sorry, the Seychellois people, were predominantly Catholic. Both churches had their respective district schools, churches and chapels, and there were constant complaints from the Catholic Church that although it had fewer schools to administer, the Anglican Church received preferential treatment from the Colonial Government regarding an anomously greater percentage of grants for education. The perception of this discrepancy must have stemmed from the fact that the Civil Commissioner, Administrator or Governor was Anglican. Diverse Cultures? Well, according to the religious denominations of the population in 1891, which was 16,440 inhabitants, it is fascinating to note that there were Moslems (73), Hindus (156), Buddhists (43) and even one Jew. In the population census of 1901, among the 19,237 inhabitants, there were 98 Chinese, 47 Malagasies and 385 Indians. Chinese and Indians would control the retail trade of Seychelles for the length and breadth of its Colonial Period (1903-1976). Eventful past? Turbulent Past? In 1862 the capital town was practically destroyed by a massive landslide. In 1883, a smallpox epidemic killed many scores of people. In 1893, our isolated and unknown island was linked with the outside world by submarine telegraph cable capable of transmitting 15 words a minute. In 1894, the 1756 Stone of Possession was NOT clandestinely removed from Seychelles and carried all the way to Aden before orders were given to bring it back. Most of us are not aware that our Pierre de Possession was missing for 3 months. In 1915, hundreds of Seychellois men died of malaria in East Africa where they had gone to participate in the First World War (1914-1918) to protect the British Empire. Most of them were descendants of slaves. In 1935, a triple execution by hanging for murder took place. During the Second World War (1939-1945) over 1000 Seychellois men joined the Commonwealth Forces to give front-line assistance to fighting troops. Many died for the British Empire.

The political awakening of the 1960s created a polarised dichotomy among the small population. Supporters of the 2 political parties were not concerned with manifestos. They idolised their leaders. The DP leader, James Mancham (1939-2017) had charisma and an abundant sense of humour plus a propensity for Capitalist Democracy. The SPUP leader France Albert Rene (1935-2019) professed an altruistic concern for the welfare of the labouring class and clamoured for independence from Great Britain which ingratiated him with the socialist regimes of Eastern Europe and earned his freedom party recognition from OAU (Organisation of African Unity). During those years of political turmoil which was bereft of the usual concomitant social violence, Seychelles got its radio broadcasting station (1965), its Rochon Dam (1969) and its International Airport (1971). On June 29, 1976 when Seychelles attained its independence, James Mancham, leader of the DP, who had inveighed against the horrors of independence took his oaths as the first President of the Republic of Seychelles. Do we call that a historical ‘paradigm shift’? Did his passionate supporters felt that they had been deceived? – because there was no referendum for independence – whereas the SPUP supporters must have experienced a sense of patriotic glee. And then came the June 1977 Coup d’état a.k.a ‘Liberation Day’ which launched our Socialist Revolution that lasted for a mere 14 years. Indeed, it coincided with the last gasp of the Cold War – after dozens of Seychellois students had attended studies in Eastern Europe and Latin America, and more than a few had returned home with spouses from their respective countries of study: the Soviet Union, East Germany, Cuba…admirably fluent in the language of that particular country! Amazing isn’t it? Absolutely impressive! Many among them are descendants of African slaves.

Ten (10) French commandants, 34 British Civil Commissionaires, Administrators and Governors, 5 presidents, 7 National Flags, 5 National Anthems, Seychelles had known during the 250 years of its history. And it has been the undesirable home to hundreds of exiles. 1798 French deportees from Ile Bourbon remained to become the first inhabitants of La Digue. In 1801, the Pretandu Coupables…French deportees, the Jacobins who had attempted to assassinate Napoleon Bonaparte. 1877, ex-Sultan of Perak. 1900, the King of Ashantis with his 70 relatives and friends. 1901, Mwanga, ruler of Buganda and Kabarega, ruler of Bunyoro. 1919, adherents of the Watch Tower Bible and Tract Society (Forerunner of Jehovah’s Witness). 1920, ex-sultan of Somaliland. 1922, Egyptian Nationalists. 1956, Archbishop Makarios of Cyprus. 1963, Abdullah Afif Didi, Leader of breakaway Maldives movement. He chose to make Seychelles his home. One of his sons is the vice-president of the Republic of Seychelles.

‘… Where an amalgam of races live in social harmony.’ This is Seychelles. This is us. Indeed Seychelles can be considered to be the epitome of the heterogeneous society, a combination of ethnicities living together united by citizenship and a common obedience to the Constitution of the country. All across the globe, migration movements are gradually transforming erstwhile homogeneous nations into cosmopolitan societies. Since the beginning of the 20th century, immigrants have adapted themselves to the cultural heritage of their own ethnic culture among the indigenous population. Examples are widespread where native inhabitants of a country have even converted to the religious faith of an immigrant ethnic group. Seychelles is a supreme example of that. There is this urge to turn the pages back and forth. Our great grandchildren will do the same. Chronology is convenient, but the past is often a fugitive of history. Many chapters and episodes have become elusive or fragmentary. This is the nature of our history. 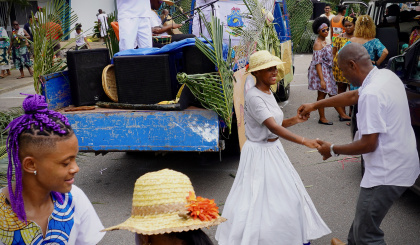 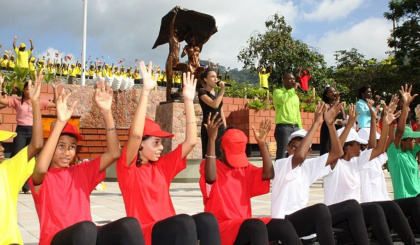 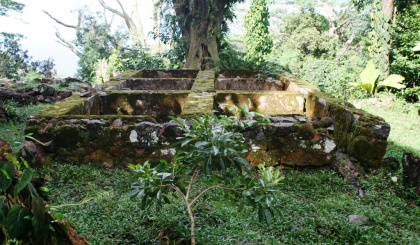 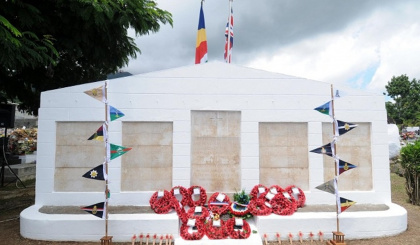 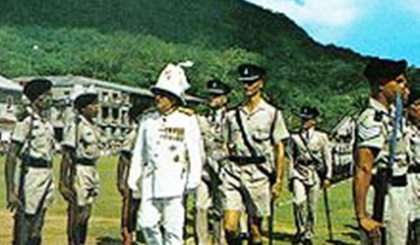