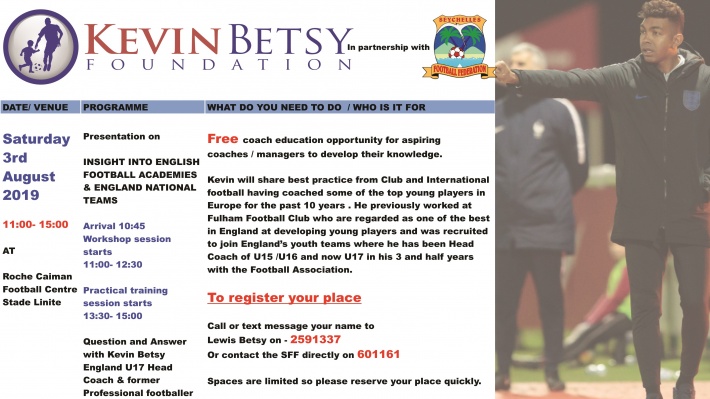 Former Seychelles international Kevin Betsy is expected here this week ahead of running a free workshop for aspiring coaches and managers to develop their knowledge in coaching education and share best practices.

Betsy, who has been working with the English Football Association for three-and-a-half years now and is England’s men’s under-17 head coach, told Sports NATION: “I will be sharing best practice from club and international football.”

Having coached some of the top young players in Europe for the past 10 years and previously worked at Fulham Football Club who are regarded as one of the best in England at developing young players, Betsy was recruited to join the England national team where he has been head coach of under-15, under-16 and now under-17 team.

“The aim of the workshop is to inspire the next and current generation of coaches / managers to develop their learning and knowledge and look to help them in developing Seychelles players for the future. It is important that anyone who wants to attend text or call to register their place. Spaces will be limited,” added Betsy who was part of the Seychelles team who won the Indian Ocean Island Games gold medal on home soil in 2011.

He added that the working will include coaching session, videos and examples of what it takes to develop young players/teams and coaches at the highest level.

Organised by the Kevin Betsy Foundation in partnership with the Seychelles Football Federation (SFF), the presentation on insight into English football academies and England national teams will take place on Saturday August 3 from 11am to 3pm at the Maison Football, Roche Caïman.

The workshop will be from 11am to 12.30pm followed by practical training sessions starting from 1.30pm to 3pm.

To register please call either Kevin’s father, Lewis, on 2591337 or the Seychelles Football Federation (SFF) office on 4601160.

Like Kevin, Lewis also played for Seychelles and he was a key member of the country’s team who lost the final at the first IOIG in Reunion in 1979 to settle for the silver medal.

A former professional, Kevin started his playing career with Woking before making appearances with Fulham, Barnsley, Oldham, Bristol City, Southend, Wycombe Wanderers before finishing his playing career where it all began at Woking. He started his coaching career at Fulham before being recruited by the English Football Association as youth team head coach.

Other than the workshop, there will be training sessions for under-10, under-11 and under-14 players on Thursday and Friday August 8 and 9. Only 22 players in each age group will be allowed to take part.

This will be followed by the Suketu Patel Cup involving eight teams on Saturday August 10. The seven-aside tournament will be for under-15 teams.

To register to take part in the training sessions and the Suketu Patel Cup, young players have to contact either Lewis Betsy on 2591337 or the SFF office on 4601160.