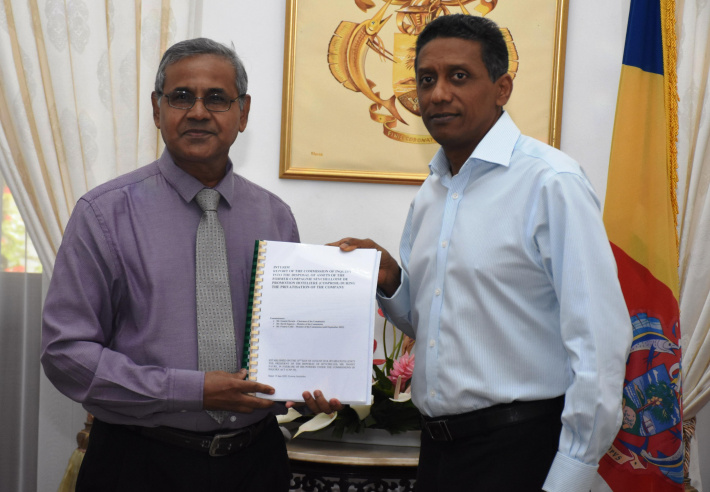 Mr Herath hands over a copy of the report to President Faure (Photo: Louis Toussaint)

An interim report on the disposal of the immovable assets of the Compagnie Seychelloise de Promotion Hôtélière has been handed over to President Danny Faure.

He was the chairman of a three-member commission of inquiry appointed by President Faure himself in July 2018 to inquire into the assets that had been owned by the Compagnie Seychelloise de Promotion Hôtélière (Cosproh), and into the manner in which the properties were disposed of or leased during the process of the company’s liquidation.

The commission was also to inquire into the accounting of the sale or lease of the said properties.

The commission of inquiry was established following a motion passed by the National Assembly for such a commission.

Speaking to the press after the handover, Mr Herath said the report is an interim one because it is not complete as some crucial information is missing and it has not been possible for the commission to obtain them.

He explained that the task that the commission had been entrusted with was not at all easy as Cosproh was set up in 1980 – 40 years ago – and was liquidated in 2006, which is 14 years ago and records were no longer accessible.

Mr Herath pointed out that the report has come up with certain findings and a series of recommendations calling on government to take certain actions in order to make it possible for the commission to obtain the missing information to finalise the report.

“It is only the government who has the authority to take these actions,” Mr Herath affirmed.

He said as per the Commission of Inquiry Act, the president can take the necessary steps to obtain the required information.

He added that these include liaising with some international organisations as well as banking institutions both locally and overseas.

“I believe the government has the power to look for the information to assist the commission in completing its report as the commission is in the national interest,” Mr Herath stressed, noting that the law is not on the commission side and the latter has not been able to access any original files as the liquidator is not responsible to keep records after five years.

Mr Herath said Cosproh had under its responsibility several properties with hotel establishments on them which have all been disposed of.

He noted that the inquiry found that for a large part the proceeds of the sales went into government coffers but in some instances the financial flow to government is not necessarily clear.

A communiqué from State House said the government would study the report, and act on its recommendations and address any outstanding shortcomings and issues it has highlighted.

A copy of the report will be sent to the Speaker of the National Assembly, Nicholas Prea. A soft copy will also be made available on the State House website at www.statehouse.gov.sc