“I lost absolutely everything in the fire. Luckily my son was not in the house at the time the fire broke out as I was so shocked and simply ran out hysterically. Though it was a small place we had so much which were of such high value to us.”

A young mother of a two-year-old boy who lost her home and all her belongings in the fire incident last Saturday at Grand Anse Praslin, shared this with President Danny Faure yesterday. Words which particularly touched President Faure on his visit to the 17 families who lost their homes in a fire which completely destroyed the block of apartments belonging to Peter Payet.

They visited the families to show their support and empathy at various tourism establishments where they are temporarily being housed since the incident. These include the Islander Guest House, Belle Vacance and Praslin Holiday Home. Several victims were being housed by family members and the delegation met with them at the district administration office.

President Faure and Minister Larue explained the various structures in place which are being set up jointly with other ministries such as Ministry of Land Use, Infrastructure and Land Transport (MHILT) to assist the families to rebuild their lives as well as provide them psycho-social support. The children and families will receive counselling for better recovery from this sad trauma.

“We are here to hold your hands until you can get back on your feet. Work has started since Saturday to find ways to assist you and it is ongoing. So do not be discouraged as you are not alone,” Minister Larue told the victims.

The fire which started around 2pm spread particularly fast and unfortunately no belongings could be recovered from the homes. Inhabitants and onlookers could only watch heartbreakingly as officers of the Seychelles Fire and Rescue Services Agency fought to extinguish the fire and prevent it from spreading to nearby buildings. The building housed 36 people, including 11 children.

The victims expressed their heartfelt appreciation to President Faure and Minister Larue for their concern and visit, as well as thanked all individuals who have assisted them particularly the district team. They have been assisted both swiftly and smoothly, and this has greatly eased their pain, especially at a time when they were already struggling to adapt to the new normal after the COVID-19 pandemic.

It is clear that the Seychellois nation is a unified nation which stands as one, especially in the face of adversity and this has been amplified throughout the past three days. Donations ranging from clothes to household items, food stuff and various others have generously flowed in.

The incident saw the coming together of various individuals, businesses and non-governmental organisations (NGO).

President Faure also thanked all those present who contributed in one way or another to alleviate the victims’ worries. The district team who has worked tirelessly in providing support for the families as well as coordinated the ongoing plea for donation towards the victims comprises the member of the National Assembly Waven Woodcock, district administrator Barbe and other volunteers.

On her part, Minister Larue also expressed her appreciation to members of the public for their generous contributions and called out on others who can be of help to come forward.

“It is important that we reach out to one another during difficult times. Today, it was clear that the victims appreciated our visit and words of encouragement. You could see the relief on their faces though some were still a bit down. I call on everyone to give a helping hand. If you are from Mahé, you are welcome to bring your donation to our office on Mahé and we will do the needful to send them to Praslin,” Minister Larue shared.

At the end of the visit, President Faure presented a cheque to the Red Cross Society of Seychelles, who has also actively assisted the families. A donation from himself and his family which shall go towards the cause.

Upon receiving the generous donation from the president, Anita Soomery thanked President Faure on behalf of the Red Cross Society of Seychelles for the donation and assured him that the money will be put to good use.

The accompanying photos show President Faure and his delegation visiting some of the fire victims yesterday.

Text and photos by Romano Laurence 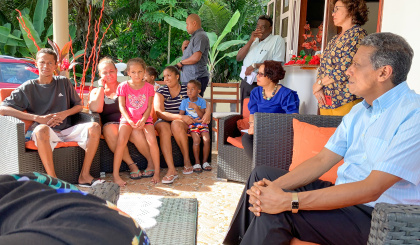 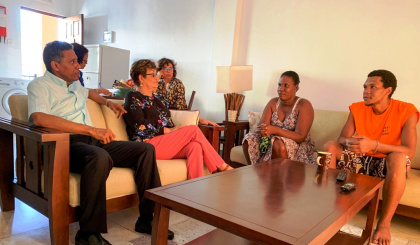 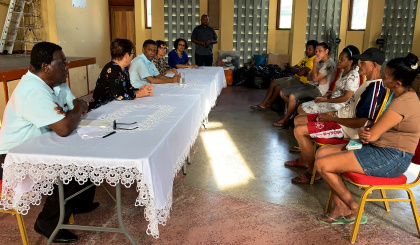