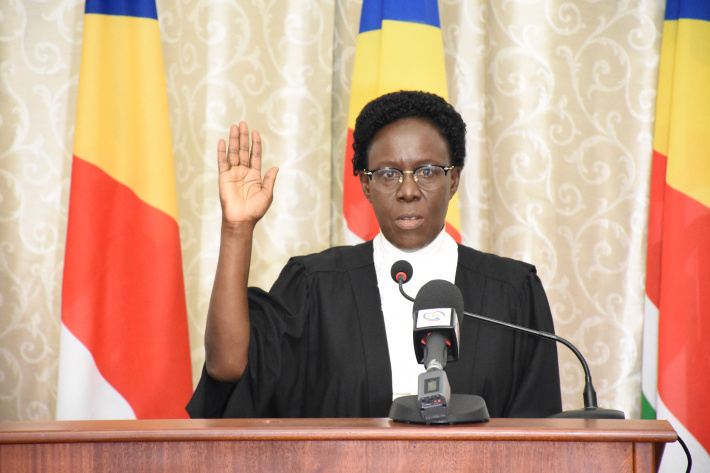 Lillian Tibetemwa-Ekirikkubinza from Uganda has been appointed and sworn in as a judge of the Court of Appeal yesterday by President Danny Faure.

The ceremony, which took place at State House, was attended by Vice-President Vincent Meriton, Speaker of the National Assembly Nicholas Prea, Attorney General Frank Ally, Chief Justice of the Supreme Court Mathilda Twomey, judges and justices of the Court of Appeal as well as senior officials in the Office of the President.

President Faure expressed his congratulations to Justice Tibetemwa- Ekirikkubinza after she had taken her oath.

With her expertise she will make an important contribution towards capacity building of the Seychelles judiciary and helping to improve its operational effectiveness.

Justice Professor Lillian Tibatemwa-Ekirikkubinza holds a Ph.D in Law from the University of Copenhagen and was the first African woman to graduate with a Ph.D in Law. She is a Justice of the Uganda Supreme Court which is the highest court in the country. Justice Professor Ekirikkubinza joined the Judiciary in July 2013 as Justice of the Court of Appeal and Constitutional Court in Uganda. She is also a highly experienced and widely researched legal scholar in Judicial and Legal matters. She is also a Fellow of the Uganda National Academy of Sciences and an alumnus of the International Women’s Leadership Forum.

In her remarks to the press, Judge Tibatemwa-Ekirikkubinza noted that her contribution to the Court of Appeal is rooted by the experience she has had serving in Uganda’s Court of Appeal.

She added that her years as a law professor will also benefit her in her tenure on the bench in Seychelles.

“Coming from an academic background is a huge plus as scholarly work is an advantage to a judge because it provides you with analytical skills,” she said.

She ended by saying that she is looking forward to the challenges ahead.

“I feel I have a lot to contribute here and assist the country in its development.”

She will take up her new position shortly. 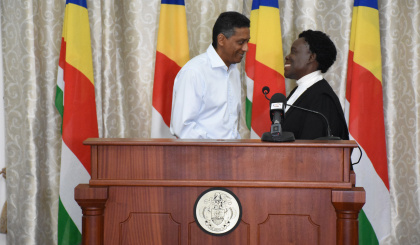