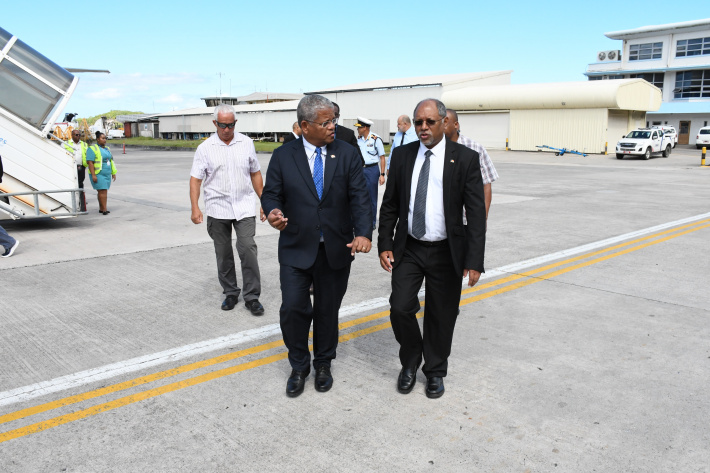 ‘Promises need to be translated into concrete actions’

Seychelles’ participation at the ongoing high-level conference on climate change in Egypt was a good opportunity for the country to assert its position that it does not only listen to promises but that those pledges need to be translated in concrete actions.

President Wavel Ramkalawan said this while talking to the press upon his return to the country yesterday afternoon from the 27th Conference of the Parties (COP 27) to the United Nations Framework Convention on Climate Change (UNFCCC) being held in Sharm el-Sheikh, Egypt.

During the press conference, held at the airport’s VIP lounge, President Ramkalawan also confirmed the recently announced news that Seychelles will move to 100% protection of all its mangroves and seagrass meadows as of 2023, adding to the already 32% protection of our ocean and 50% of our forests.

“I am very satisfied with the visit I made to Egypt and this time there was more focus. All the small island states, especially the Alliance of Small Island States (Aosis) is putting emphasis on the Multi Vulnerability Index (MVI), a new data-driven index that seeks to increase eligibility for small island developing states (Sids) to receive concessionary financing to address our unique vulnerabilities. Secondly we focussed on the concept of loss and damage, what the industrialised countries and multinationals do to our planet and we in return suffer. It was also a good opportunity for our country to state that we not only listen to promises and that these promises need to be translated in concrete actions. This message was very clear,” President Ramkalawan said.

During the summit, President Ramkalawan seized the opportunity to announce that Seychelles will move one of its nationally determined contributions (NCDs) to climate change earlier, that is the 100% protection of all its mangroves and seagrass meadows. “Seychelles is already making quite a bit of contribution; as far as pollution and destruction of the planet is concerned we are net zero. The message from Seychelles is very clear. We are serious, we mean business and we want solid partnerships. All in all Seychelles came out very well.”

At the COP 27, President Ramkalawan met with different heads of State.

“In my meeting with President of Madagascar, Andry Rajoelina, we were able to discuss about the gold seized in Seychelles and due to the good relationship that exists between our two countries, we have come to the agreement that the gold will be returned to Madagascar and after evaluation Seychelles will receive a share from it. We also spoke about the delimitation of our territories and a delegation from Seychelles will be in Madagascar to finalise the delimitation. Next week when I will participate in the Sommet de la Francophonie, I will meet President Rajoelina where we will issue a joint statement to share all our agreements.”

President of Kenya, William Ruto, also confirmed with the President that he is in the process of settling down following his accession to the Presidency and then all the memorandums of understanding signed will be activated.

He also met the Vice-President of the Maldives and the President of Sri Lanka. Rwanda is ready to help us in the education sector.

“I was able to interact with the President of Israel, Isaac Herzog, where we discussed on how to boost up our ‘border control security’ through agreements already signed.”

President Ramkalawan also shared that he spoke to the Minister for Justice of Egypt regarding the three Seychellois held in a Cairo prison and for now “Egypt does not want to talk about it. Currently their sentence has been commuted from death penalty to life imprisonment and I asked how long do they have and the response I got was ‘about five to ten years’ before they can even have any consideration. We have to respect the decision of the country but that does not mean we will stop the dialogue with the country. Now that they are in a prison in Cairo, it will be easier to organise for visits. I have to unfortunately inform the families that Egypt’s position is very serious and we need more time”.

Upon his meeting with the IMF’s managing director and chairperson of the executive board, Kristalina Georgieva, President Ramkalawan said Seychelles was commended for its efforts and economic discipline and for being an exemplary country to the rest of the world in its economic recovery plan.

“It was a really proud moment for the country and Ms Georgieva announced to me that a special fund will be set up to which Seychelles will have access. These loans up to 30 million dollars will be at concessionary rates. Currently Bahamas and Seychelles qualify for these loans,” shared the President.

The Minister for Agriculture, Climate Change & Environment, Flavien Joubert, also had the chance to chair and participate in a few round tables. A group of young people from Seychelles are also attending the conference and according to the President they are doing their best to promote Seychelles.

“All in all Seychelles came out very well and I am slightly more optimistic after this edition of COP and sincerely hope that this time actions will be taken. Many countries voiced out their concerns about the unfulfilled promises done during the last COP 26 and even the countries that did not fulfil their promises acknowledged their non-participation in the process. Seychelles has its own vulnerabilities and we need to know what we have and how we can make use of our resources,” concluded the Head of State.

President Ramkalawan also commented on the recent meeting between Vice-President Ahmed Afif and Designated Minister Jean-François Ferrari with the board of the Seychelles Broadcasting Corporation (SBC).

President Ramkalawan explained that when a President is elected he is firstly “the Head of State, secondly he is the head of the government and thirdly the Commander in Chief. As the Head of State, the President is responsible for everything that is happening in the country and he is responsible for how things are being managed in the country. If there is an outcry in the country regarding a subject, I will have to intervene. Before there was a policy at SBC of not naming people who are being accused in a case and then changed their policy to give the names of the persons that have been charged. SBC decided to do a programme on a minister who has not been charged yet, and this is questionable. In my absence, the VP and the designated minister met with the CEO, the deputy CEO and two members of the board of SBC to have a conversation to see what was happening. Minister Antony Derjacques is a citizen and the rule of law applies to all citizens alike. The Police force treated Minister Derjacques as a citizen. I hope SBC through this conversation comes clear with their policy and explain to the public how they will operate. Will there be different policies for different groups of people? This has nothing to do with the liberty of expression and there need to be a rule that is applicable for all”.

President Ramkalawan also made it clear that he did not intervene in this matter at any moment and the Police did their job as they should. “Was it fair to judge Minister Derjacques on TV as there is an ongoing case right now? To have the meeting with SBC board was the right thing to do! If tomorrow the court finds Minister Derjacques guilty, I as President will not interfere in this matter.”

President Ramkalawan also condemned the hate comments and speeches circulating on social media against one of the members of the National Assembly.

“We are in a new era where people have freedom to speak but we have to be careful with freedom of expression. Seychelles is a country that is governed by the rule of law and no one is above the law…”