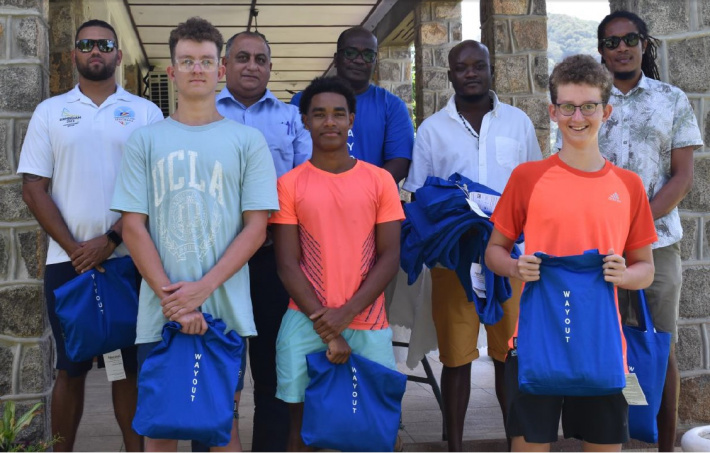 The swimmers, coach and representatives of 'Ocean Cleanup project' in a souvenir photo with PS Jean-Louis and Mr Lespoir (Photo: Contributed)

It was the WAYOUT Group’s local representative Christopher Lespoir who made the presentation during a small ceremony yesterday at the Family House, Bel Eau in the presence of principal secretary for youth and sports Ralph Jean-Louis.

It was co-founders of the 'Ocean Cleanup project' Marcus Quatre and Dominique Thelermont who accepted the donation on its behalf, while Nathan Nagapin, alongside brothers Damien and Thierry Payet, and coach Steven Mangroo received on behalf of the swimming team.

Mr Lespoir noted that WAYOUT Group is involved in sustainable clean water production and is committed to supporting aligned initiatives in Seychelles, related to water.

The Ministry of Youth, Sports and Family takes this opportunity to extend its full support towards Team Seychelles and wish them all the best as they compete at the Fina World Junior Open Water Swimming Championships.

Contributed by the Ministry of Youth, Sports and Family