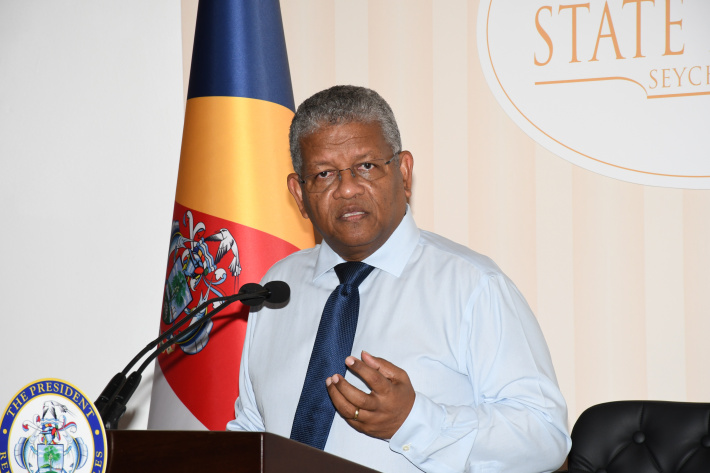 ‘Government working conscientiously and well to provide a good service’

The third presidential press conference for the year started with a minute of silence as a sign of respect following the passing of Britain’s Queen Elizabeth II on Thursday.

President Wavel Ramkalawan also expressed his sadness over the tragic incidents that happened last weekend which claimed the lives of three people.

In his opening remarks, President Ramkalawan highlighted the importance of freedom of expression and how this should be respected. He said he was worried and saddened by the lack of truth and people resorting to gossip, and how information in the media are twisted, not thoroughly researched and this is detrimental to the society.

“Instead of promoting the truth and transparency and other elements that will allow us to grow, we are doing the opposite,” said the president. He urged the media to share truthful information that will help and not to resort to gossip.

Following the sad passing of Queen Elizabeth II on Thursday evening, President Ramkalawan yesterday signed the condolence book at the British High Commission. As a sign of respect, the flag was flown at half-mast yesterday, and is expected to be prolonged for a few more days, according to the head of state.

“In my message, I stated clearly that Seychellois will remember with much affection when in 1972 she visited Seychelles to open the airport, and it was a moment of joy, and of course an important moment, as it marked the birth of our tourism industry, which is now the pillar of the economy,” the president stated.

Seychelles successfully and peacefully gained independence from Britain in 1976, under the reign of Queen Elizabeth II.

The president further affirmed that the relationship with the British Monarch remains intact and will continue in the coming years, under the reign of the next in line, King Charles III.

Seychelles is to be represented at her funeral.

Performance of his administration

The president expressed his satisfaction with the branches of his administration that are “working conscientiously and well” to provide a good service to the public. He, however, admitted that there are some bad fruits among the bunch, causing frustration among the population.

“We need to somehow instil some order in our country,” he stated, urging all to work in the interest of fellow citizens and the country in general, decrying “hypocrisy” by various groups who have been at the centre of controversy and public outcry in recent weeks. In particular, he referred to the ‘Box to Box’ and Waterfront development project, vendors who harass visitors and who are in the habit of stealing, as well as the operators in relation to the conundrum among taxi operators at the Seychelles International Airport.

Renovation works have commenced on a number of sports infrastructure, President Ramkalawan confirmed, including the Palais des Sports and football stadium (Stad Linite). The Seychelles Football Federation (SFF), along with the Fédération internationale de football association (Fifa) are finalising the details for the repairs.

Government is finding the means to upgrade other facilities for use for the preparation of local sportsmen, in time for upcoming regional games.

War on drugs and involvement of military in drug operations

“I am satisfied with the way that the war has been revived. It had been dormant for some while and people were wondering what was happening. Today, people are aware that actions are being taken,” President Ramkalawan expressed.

With the recent raids, law enforcement is successfully clearing the streets of contraband and illegal substances, including drug utensils, weapons, and stolen property. Unlicensed scooters and vehicles carrying false registration numbers have also been recovered by law enforcement during recent operations, he said.

“There is no abuse,” he said categorically.

As a means to ensure that operations are done in an orderly manner and in accordance with the law, Seychelles is for the first time utilising body cams, notably when military officials are assisting with the operations.

Citizens are not beaten or tortured he clarified, also highlighting the role of the military in simply assisting the police to secure a premise, while the police bear the responsibility of leading and conducting the operations. The president further reminded that presidential bodyguards are first and foremost military personnel, as part of the special forces, meaning they may also join military operations.

Dogs donated by Russia and the United Arab Emirates (UAE) have been effective during the operations.

The ‘biggest bust of cannabis resin’ and strict sentences imposed on the drug importing, human trafficking trio over recent weeks is testament of his administration’s efforts to eradicate drugs in Seychelles, he further stated.

President Ramkalawan later declared that the war is imperative since his many messages to drug traffickers have gone unheard, as evidenced by the increase in drug-related activities.

Recent accomplishments include the arrest of an individual who had ingested 100 bullets of cocaine, as well as a second arrest and seizure of 4kg of synthetic cannabis.

Corruption at the Montagne Posée prison

With regards to ill-gained assets, government is working on certain mechanisms to allow for the freezing of assets, the details of which are to be announced in the national media, President Ramkalawan stated.

With the Truth, Reconciliation and National Unity Commission (TRNUC) nearing the end of its mandate and the victims’ committee threatening to take their case to the international stage should government lack the finances for the financial reparation to victims, President Ramkalawan suggested that the decision is premature, considering that the final report is yet to be presented to the president, and the National Assembly.

Cabinet recently approved an extension to the commission’s mandate, up until December 31.

The president emphasised on the need to distance government from every development project, emphasising the independence of decision-making authorities such the Seychelles Planning Authority, and the Ministry of Agriculture, Climate Change and Environment.

Members of the public have the environmental impact assessment (EIA), a channel by which they can make their concerns and views heard by the authorities.

In response to the concern by employees of national carrier Air Seychelles regarding discontinued gratuity payments and benefits since 2020, President Ramkalawan said it is news to him, promising to look into the matter with the chairperson of the board Veronique Laporte, and Minister for Transport Antony Derjacques.

Report on the state of health facilities

The report on the state of health facilities is well advanced, and has served to highlight various weaknesses within the health system.

The president however affirmed that work is ongoing towards improving health services, and meeting the public’s high expectations with regard to the level of care.

Government is not always able to provide access to new medications prescribed to patients especially on privately-funded medical trips and treatments, on account of significant costs.

“There are many challenges, but, I salute the employees within the Ministry of Health, as I am aware of their devotion. I know that the majority of them are giving their all,” he said.

Malpractice and mistakes occur in every industry he clarified, highlighting the heaviness of the implications for the medical field, as compared to others such as the media. Legal avenues for remediation are available, he further iterated.

The Office of the Ombudsman can offer some form of relief to complainants and victims of malpractice, he concluded on the matter, stating that health and well-being is an individual responsibility.

The Constitutional Appointments Authority (CAA)functions on a full-time basis, the president clarified, and the present authority is engaged in much work to establish guidelines for the numerous positions under its authority. Interview guidelines for judicial positions are among the new guidelines.

The authority recently appointed the Planning Authority Appeals Board, and is faced with a heavy workload, according to President Ramkalawan, justifying the merit for the recently-announced end-of-term compensation for its members.

The Seychelles economy is growing and different groups within society are benefitting from the positive economic performance, the president said.

Government measure including the provision of free public school breakfasts and lunches, and temporary maximum retail price (MRP) on essential commodities is one of the ways citizens are reaping the benefits.

Seychelles will remain a champion in environmental protection and conservation, even with the recently signed agreement for oil exploration studies within Seychelles’ territory.

“To remain as a champion of the environment, it is important for us to know what is under our seabed,” President Ramkalawan said, noting that such knowledge will serve as an ace up Seychelles’ sleeve, giving the country some bargaining power over other states. Exploitation is not something which government intends to pursue, he reassured.

President Ramkalawan has announced that the country has received a 50 percent discount from Union, the Scottish-based company tasked with revamping the logo of the tourism department. He said this followed talks he had with the company’s owner, who is a Seychellois.

The president also explained the money paid to Union covers the whole marketing package and everything related to the project was done above board, with the tourism department following all the procurement requirements.

Seychelles to get juvenile centre soon

President Ramkalawan also announced that the country will soon have a juvenile centre to cater for young offenders. When answering a question on the rise of criminal offences by those below 18 years old, the president said his administration was concerned and was taking the matter seriously.

He said these youngsters are involved in many criminal activities including drug-related, thefts and even sexual offences.

Private jet to be used as air ambulance

The president said the private jet used recently for his overseas trip will soon be at the disposal of the Ministry of Health to be used as an air ambulance. He said these form part of various negotiations he has been doing on behalf of the people and this will benefit Seychellois who need to undergo overseas treatment.

The contract of Islands Development Company (IDC) chief executive Glenny Savy, which ended in 2020, has been renewed for a three-year period, said the president.

“This decision was taken because of the ongoing work.”

He said that IDC has gone through a lot of transformation and the organisation is managed by a board which is “entirely accountable”.

He was answering a question from Clive Camille of Télésesel, on his plans for IDC prior to his election. President Ramkalawan said the country was benefitting through a lot of projects being undertaken by Green Island Construction Company (GICC) which is run by IDC, and these include the national library, the La Digue hospital, as well as the Creole institute.

“If there has been positive changes in the benefit of the country I do not have any problems. Let us look at our country. I strongly believe that Seychelles is for all its citizens, let us not look at hatred. I am ready to work with anyone,” said the president.

State of the nation

President said he was worried at the irresponsible attitude and behaviour of some individuals.

“I am worried about the number of babies born from addict mothers, which makes me question our future, the manpower, what will this mean for our school as well,” said the president.

He said he was also concerned that people are too dependent on the state and expect to be taken care of from the cradle to the grave. “People have not learned to stand on their own and expect the state to provide everything. But we have to relook at this,” said the president. 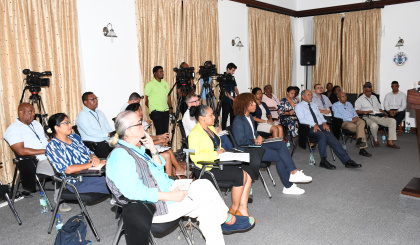