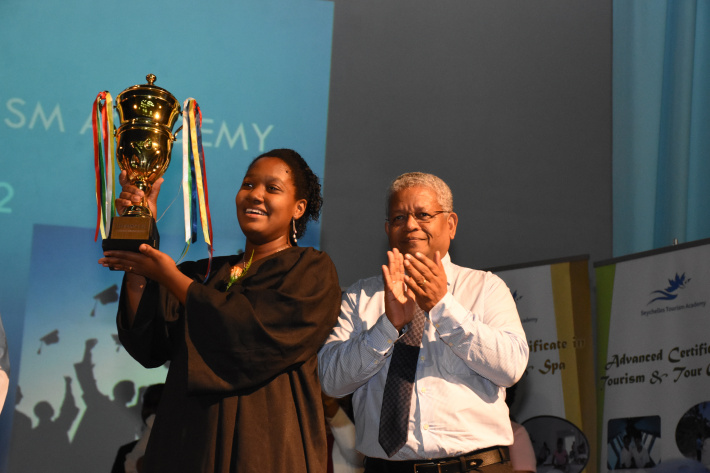 Twenty- year-old Ketsina William is the winner of the President’s Cup as the most outstanding student from the group of 200 learners who received their certificates and awards during the Seychelles Tourism Academy graduation ceremony yesterday.

Ketsina was presented with the cup as well as a laptop by President Wavel Ramkalawan during the ceremony which was held at the UniSey’s auditorium at Anse Royale.

Married and mother to a young child, Ketsina followed a two-year course in Advanced Certificate in Food Preparation and Culinary Arts while her husband is currently pursuing his studies at the Shannon College of Hotel Management in Ireland. She was very emotional when her name was called and after receiving her prizes.

“I am really grateful to the Almighty and to my family for all the support they gave me during my two year of studies. It was not easy but I had to prioritise in order to achieve what I want in my life. I was taken by surprise hearing my name called and I could not stop myself from shedding some tears,” said the young woman.

But she admitted that she had worked hard and made a lot of sacrifices and she is overjoyed that her hard work has paid off.

During her time at the academy Ketsina said she always made time to actively take part in various activities that the institution hosted in collaboration with other organisations and these included the Tuna Week with the Seychelles Fishing Authority, the Vegan cuisine training with Hilton Seychelles, the Chinese New Year drawing competition with Confucius Institute, cooking and baking activities with the President’s Village.

The graduation committee recognised that Ketsina was not the only learner who was also a mother during the time of her studies, however they were impressed by the way she conducted herself both on and off campus. Her academic, practical and work-based experience results are highly commendable as she clinched the best academic, the best practical and the best overall performer award for her studies.

The other awards presented at yesterday’s ceremony are:

The Governing Board Award which went to Angel Belle.

The Director’s Award has been won by Chantelle Cadeau and Hussayn Charles.

In the Advanced Diploma in Hospitality Management course the awardees are Antony Servina, Sherine Woodcock, Mehdi Stravens and Martina Luther.

In the Advanced Certificate in Wellness and Spa course, the awardees are Lawraine Marie who clinched the Best Academic Award and the Best Practical Award, Andria Anthat the Best Effort Award, Haley Benoit the Best Overall Award and the best Confucius Student Award went to Bryna Albert.

For the Certificate in Restaurant & Bar course awardees are Hillary Amouna who won the Best Academic Award and the Best Practical Award, Christy Bistoquet clinched the Best Effort Award while the Best Overall Award went to Hillary Amouna.

The director of STA, Terrence Max, congratulated all the students and noted that overall, the global tourism industry and that of Seychelles are showing signs of steady recovery.

“Even more so, all of us who are part of this industry appreciate that we need to be more resilient than ever and understand that dynamism and constant change will prevail. You have a great opportunity presented to you to form part of our industry’s regeneration and revival. Make the most of it and enjoy the journey ahead,” Mr Max told the graduates.

Since 2007, the STA has developed a strong partnership with Shannon College which was in line with the government’s strategy to have a substantial number of Seychellois at all management levels in the country’s hotels, who would lead and motivate their staff to provide the best possible hospitality product to visitors.

“As of 2013, eight classes have travelled to Ireland. There have been 92 graduates and the majority of them have returned to Seychelles. Given that the first graduates returned to Seychelles in 2014, their progress has been most impressive. There are 54 students currently at various stages of the programme, including today’s cohort ready to depart for Shannon in September and there are 16 students who are still on final year placement,” Dr Smyth shared.

He emphasised on the role of the young leaders to motivate, guide and influence teams of people to achieve the highest standards in a profession where you are with your customers 24/7.

He concluded his remarks on an emotional note stating; “ Mr President and the whole university, I present to you these my daughters and these my sons, all of whom I know both by character and doctrine to be able and fit to be admitted to the Degree of Bachelor of Business. They finished their studies with honour; and this I testify and vouch to you with my faith, and to all the Academy.”

The graduation ceremony ended in a souvenir photo session with the graduates and guests who included the Minister for Education, Dr Justin Valentin, Minister for Employment and Social Affairs Patricia Francourt, the chairperson of STA’s governing board Derek Barbe, parents, among other guests. 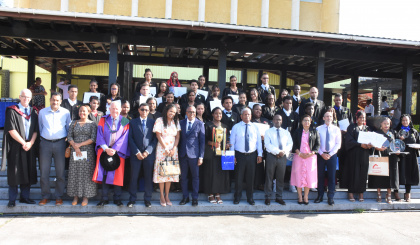 Graduates and guests in a souvenir photograph (Photo: Louis Tousaint)