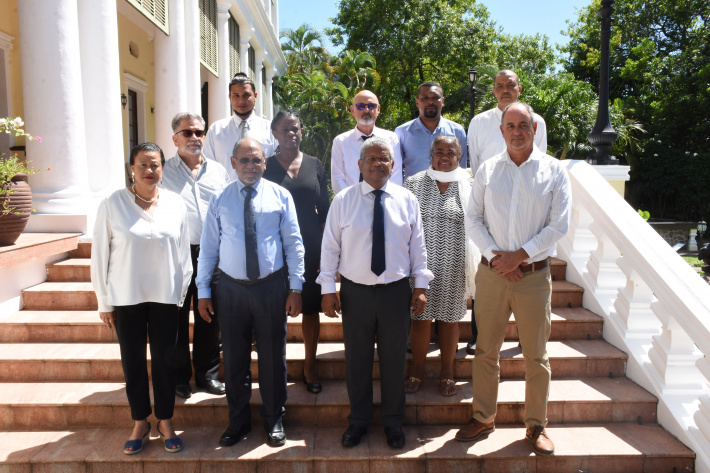 The SBC board members in a souvenir photograph with President Ramkalawan (Photo: Thomas Meriton)

The chairman of the board, Gerard Lafortune, said that during the visit they discussed the direction in which SBC is heading and the various challenges the media company faced and faces currently.

The SBC delegation comprised the nine board members, one staff representative and the current chief executive, Berard Dupres.

Board members of SBC are appointed by the President and the new board was appointed last month.

Mr Lafortune noted that the president wished to meet the board members and discuss with them in general on the work that needs to be done at the media house.

The chairman further added that President Ramkalawan also discussed with the members his vision for the media house.

Mr Lafortune stated that “government is one of the biggest stakeholders that SBC has, and the direction that the president wishes SBC to go in, something that the majority Seychellois and board – both past and present – wish as well, is to have more local content especially in news and current affairs”.

Mr Lafortune noted that there will be balanced news report as stated in the SBC Act. He added that sometimes journalists’ reports are unbalanced, lacks background information or did not have time to research the report or production misses certain vital or key information. He noted that this is the direction the discussion took place and he claims it reflects the sentiment of the board, management of SBC and the public in general.

The chairman stated that one positive outcome of the meeting was that SBC had an initiative that is in the process of implementation to engage all the ministries and their public relations officers who have a mandate to educate the public on their roles etc and he stressed that they should not expect journalists to know all these details.

He added that the specific ministries know their roles and the engagement that SBC has proposed is to set up meetings with public relations officers in all the ministries and show them what SBC can offer in terms of platform, programmes etc.

“We have to work together to have better outputs,” said the chairman.