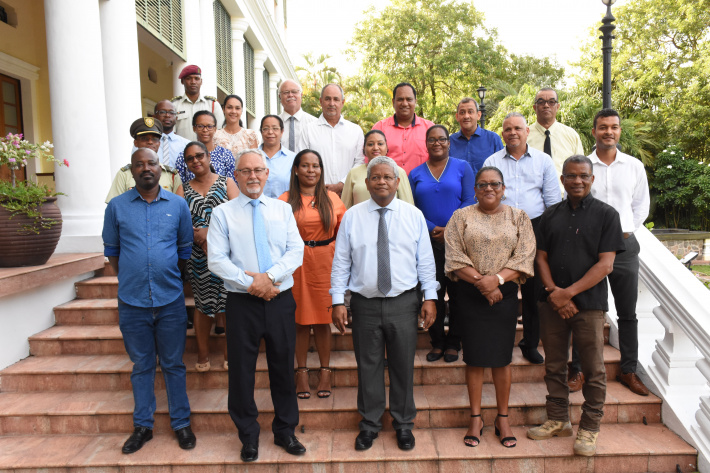 Members of the National Celebrations Committee in a souvenir photograph with President Ramkalawan yesterday at State House (Photo: Joena Meme)

President Wavel Ramkalawan has thanked and congratulated the National Celebrations Committee for coordinating a successful Independence Day parade on July 3 as well as activities to mark Constitution Day on June 18.

The parade took place this year after a two-year hiatus due to restriction measures in place to help curb the spread of Covid-19.

Speaking in a short ceremony at State House on yesterday afternoon, Mr Ramkalawan expressed his heartfelt thanks and appreciation to the twenty-member committee led by Designated Minister, Jean-François Ferrari, for their hard work and dedication to ensure the national celebration was a success.

After being postponed due to unfavourable weather condition on June 29, Seychelles’ 46th independence anniversary was celebrated on Sunday July 3 with a parade descending in the heart of Victoria, showcasing 39 platoons from various forces and the youths from the Seychelles National Youth Council (SNYC), as well as assets used by the police, the army and the Seychelles Fire and Rescue Services Agency (SFRSA).

The one and a half hour parade and performance of Seychelles’ national dances by SNYC youths, attracted thousands of onlookers who aligned the streets to cheer on the participants.

When addressing the committee members, President Ramkalawan said a lot of effort went into this year’s celebrations and it was a moment of joy for the whole nation.

“I would like to thank you on behalf of the Seychellois people for the way you not only organised the Independence Day celebrations but also Constitution Day on June 18. I believe they were two activities that brought some joy and celebrations, especially after the Covid-19 pandemic where everything was tough for the people, and I believe it was a time where they just wanted to unwind,” said President Ramkalawan.

This year, the committee – made of representatives from the Seychelles Defence Forces, the Mayor’s office, health department, local government, the police, finance, protocol, Seychelles National Youth Council, the private sector and the media – hosted three flag-raising ceremonies for Constitution Day on the three main islands – Mahé, Praslin and La Digue – as well as a National Day Bazaar on Saturday July 2 in partnership with the Enterprise Seychelles Agency (Esa).

The president commended the team for taking the flag-raising ceremonies to the other two main islands and the National Brass Band to perform there for the first time, as well as for the military participation.

He called on the committee to start thinking about ways to improve next year’s celebrations such as the involvement of more artists from yesteryear.

“Let us not only think about the young people but those people who have been here all these years and have also made a significant contribution,” he added.

For his part, the committee’s chairperson, Designated Minister Jean-François Ferrari, commended his team for their devotion and support for the past three months.

“This is an extraordinary team that came together and I believe each organisation gave their best person for the job,” said Mr Ferrari.

He added he was satisfied that the celebrations went according to plan, although there are areas that could be improved to ensure that all onlookers get to witness the whole celebrations for future events.

Mr Ferrari said although it is too early to say whether the national parade will take place in Victoria next year, he hopes that the event remains in the town centre.

“I would like for it to remain in town as it brought a natural ambience. I know it will not always be possible but our task now is to find ways to make it more interesting by bringing new elements, maybe alternate between stadium and town, bring in new attractions such as a naval display by coastguard and brainstorm on other ideas,” said Mr Ferrari.

The chairperson also announced that under the watchful eye of the Ministry of Finance, the National Celebrations Committee managed to stay within its R5 million budgeted for the national events.

“I like working within a budget and although I did not do this work to make a saving, it is good to know that the money was well spent. It is formidable that we managed to organise four events and stayed well within out budget,” concluded Mr Ferrari.

During yesterday’s ceremony, the President presented a certificate of appreciation to each committee member and thanked committee member Gerard Lafortune, who was the coordinator of the national day parade, for his 28-year contribution towards the National Day celebrations. 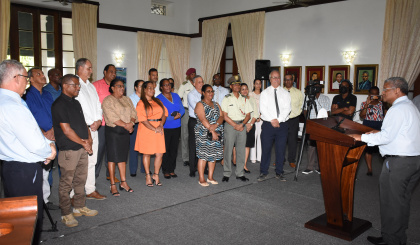 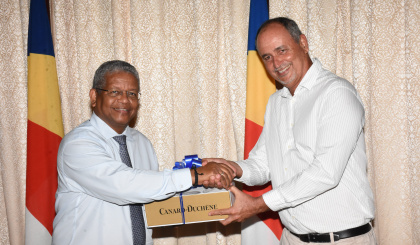