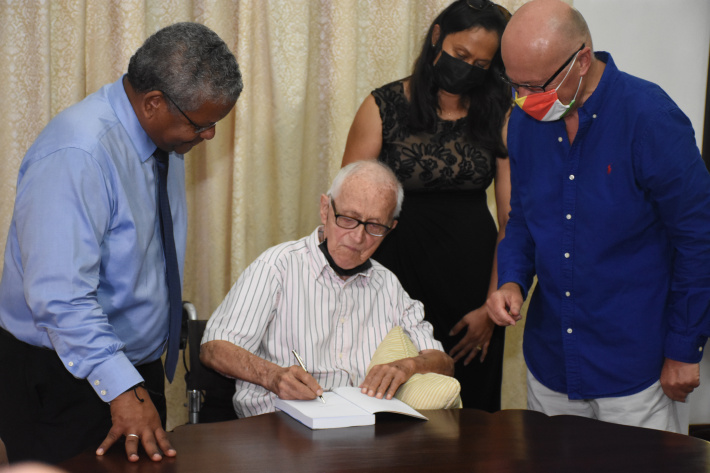 William McAteer signing the first copy of the book as President Ramkalawan and his son Ian look on (Photos: Thomas Meriton)

‘Another Story’, The History of Seychelles 1976 to 2020, a new book written by William Henderson McAteer MBE, was officially launched in a short ceremony at State House on Saturday evening.

This was in the presence of President Wavel Ramkalawan, First Lady Linda Ramkalawan, leader of government business in the National Assembly, Hon. Bernard Georges and other invitees.

The launch was by Ian McAteer, the son of William McAteer, and he spoke on his father’s behalf and on how the book came to be realised. He quipped that “this is the book that almost never happened. My mother made my father swear that he would never write any history about Seychelles after independence.”

He noted that his father got bored when he wasn’t writing and eventually in 2018 he informed his son that he was going to write the book.

Mr Ian McAteer said he thought his father would not be able to write the book due to his old age. The son recounted that after eight months his father sent him the manuscript and he was blown away. The story is of Seychelles from Independence up till 2020.

William McAteer, 94 years old, was originally from Scotland and was married to the late Seychellois Juliette Mellon. He has written four other books before ‘Another Story’ and they all relate to Seychelles. His other books are ‘Hard Times in Paradise’, ‘To Be A Nation’, ‘Rivals in Eden’ and ‘Echoes of Eden’.

William McAteer signed and presented the first copy of ‘Another Story’ to President Ramkalawan in the presence of his family and friends.

“’Another Story’ is the story of the five people who have occupied this wonderful building (State House). Who have had the honour and privilege but also the trials and tribulations of running our country,” Mr Georges remarked.

“You made me realise that I am part of an important chapter of the history of Seychelles,” President Ramkalawan said.

“I am sure a lot of Seychellois will go after this book. It is so important because many young people don’t know the history of Seychelles,” he stated. 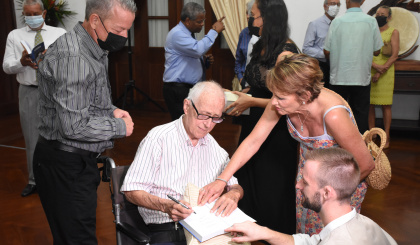 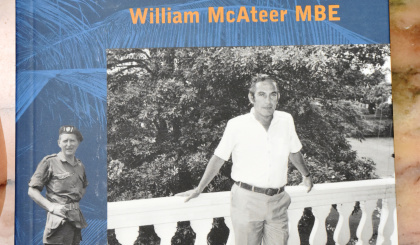