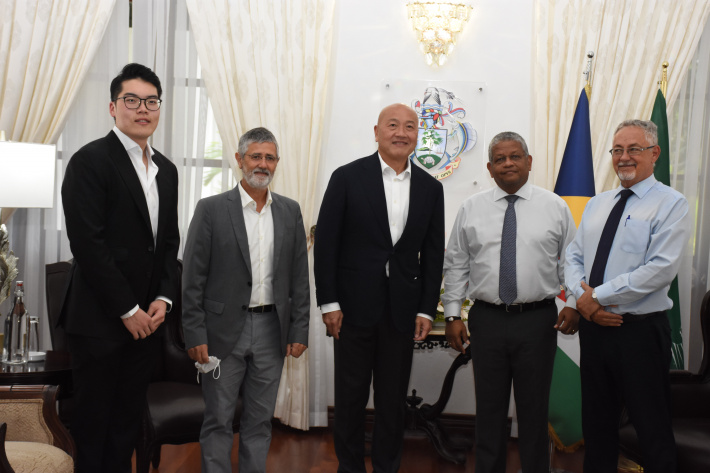 The president and chief executive of Thai Union Group, Thiraphong Chansiri paid a courtesy visit to President Wavel Ramkalawan yesterday afternoon at the State House. He was accompanied by the general manager of the Indian Ocean Tuna Limited, Ricardo Lousio.

After his meeting with the head of State, Mr Chansiri noted that Thai Union has been investing in the Indian Ocean Tuna Limited (IOT) since 2010. “My last visit to the Seychelles was in the middle of 2019. This is the first time that I have had the opportunity to meet the new President. We had the opportunity to discuss about our business globally and also to find ways on how we can cooperate with the government. We want to collaborate more with the fisheries ministry and the education ministry. We want to see how we can engage the local people and how we can create employments for the locals in Seychelles.”

Asked about the state of IOT, Mr Chansiri explained that “one of the challenges for the industry as a whole and for IOT is competitiveness. IOT is a very important part of our business and one of the strategic facilities in our group. We want to make sure to see how we can improve the competitiveness of IOT because we want to stay here long term. In the last five years, our company has invested over 30 million euros and we also expect to inject another 10 million euros in the next two years.”

Mr Chansiri explained that they want to invest in new alternative energy like solar panels so that they can produce energy for the facility. With all the investments, the president and chief executive of Thai Union noted that they invested a lot in automation technologies and the operation is running quite well.

According to financial reports from Central Bank of Seychelles, there has been a decrease in production of canned tuna. The general manager of IOT explained that “during the last two years there have been a lot of fluctuations in demands. We need to understand that globally the industries faced difficulties mainly inflation. We need to find alternatives to cover these gaps.”

The GM of IOT concluded by saying that they are trying their best to run the IOT plan and urges the Seychellois to keep applying to work at IOT.