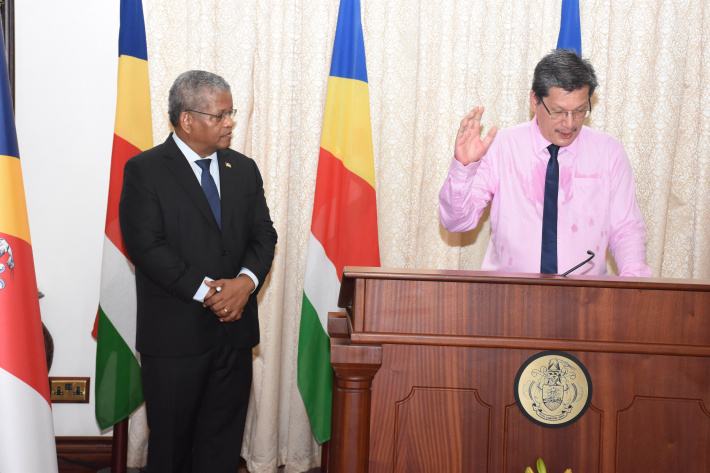 Mr Lucas taking the oath in the presence of President Ramkalawan before assuming his new post as curator (Photo: Louis Toussaint)

Danny Lucas has been appointed by President Wavel Ramkalawan as curator of properties following recommendations made by the Constitutional Appointments Authority.

Yesterday morning at State House, Mr Lucas took the oath of allegiance to the Constitution and the official oath in the presence of President Ramkalawan, Vice-President Ahmed Afif, Chief Justice of the Supreme Court RonyGovinden, President of the Court of Appeal Justice Anthony Fernando, Attorney General Frank Ally, members of the Constitutional Appointments Authority (CAA) and members of his family.

Currently chairperson of the Electoral Commission of Seychelles, Mr Lucas remains in his post but as curator he will administer the property of persons who are declared absent by the court or who die without any heirs.

In addition to the functions that were discharged by the curator of vacant estates, the curator has been given power to appoint executors and fiduciaries and supervise their functions so as to ensure that successions are properly administered and distribution of the succession to the heirs of the deceased person is effected within a period of two years of his/her passing.

Other new powers given include partitioning of property that is co-owned with the agreement of the co-owners. The curator will also ensure that executors and fiduciaries carry out their duties in accordance with the Curatelle Act and the other relevant laws to succession with greater efficiency and greater speed. This is expected to make the distribution of succession more efficient, faster and reduce the problems that a lot of people have with ‘inheritance land’ (later zeritye).

President Ramkalawan congratulated the CAA for recommending Mr Lucas, noting that he has no doubt that he will take up his new responsibilities with competence and integrity.

“He will also help in solving many situations that we currently have in our judiciary. The issue of inheritance is one that concerns our population and with this new position, with the new civil code we hope that the situation will be eased. It is important for the public to know that after two years following the death of a person, it is important for the inheritance to be shared amongst the heirs. In Seychelles we currently have many properties which are considered ‘inheritance land’ and many people cannot make a decision about them. I believe in your role as curator you will help people to come up with a solution in such a situation,” said President Ramkalawan.

MrLucas explained that the most important thing to start with is the appointment of executors. “Now everything that concerns succession of wealth will be the responsibility of the curator. The curator will also administer and supervise the executors, asking for an account on the procedures. Many people are frustrated because often times, the executors take too long to sort things out. When the public comes to the curator, we have to make sure that the executors know what they have to do,” he explained.

Mr Lucas admits that this appointment is a new challenge and it is a new direction for his career.

“Now we have to start from scratch. My appointment starts from today (yesterday) and there is no staff and office. We have only the records of files from the Office of the Registrar General and other records that are in the courts. Eventually, once we establish an office we will gather everything and start working. We will work within the regulations that already exist in law,” explained Mr Lucas.

Mr Lucas holds a Bachelor of Arts in Law from the University of Kent, United Kingdom and a Post-Graduate Diploma in Law and Practice from the City University of London. After his studies in 1986, he joined the Attorney General’s chambers as assistant state counsel and was eventually appointed state counsel. From 1990 to date, Mr Lucas has been an attorney-at-law and notary in the private sector.

In 1993 he was appointed chief electoral officer for the second referendum and the Presidential and National Assembly elections. He was appointed chairperson of the Electoral Commission of Seychelles in 2019.

Meanwhile, President Ramkalawan is urging members of the public to come forward and apply for the posts that are advertised by the CAA as we need more Seychellois to fill these positions. 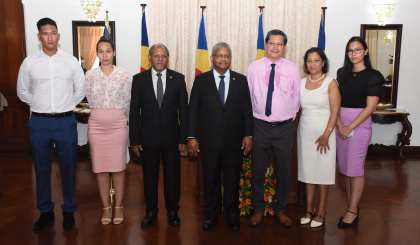 Mr Lucas was accompanied by members of his family pictured here with President Ramkalawan and Vice-President Afif (Photo: Louis Toussaint)