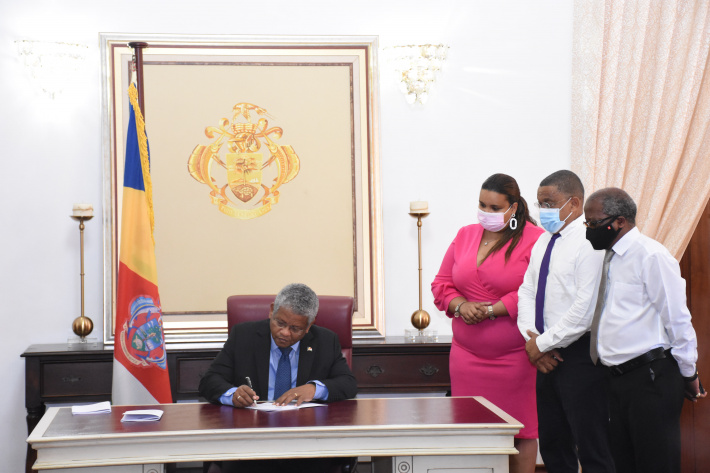 The Seychelles Planning Authority is now guided by a new legislative framework with the assent of the Physical Planning Act (2021) by President Wavel Ramkalawan yesterday morning during a short ceremony at State House.

The Act that President Ramkalawan signed off replaces the Country and Town Planning Act (1972) and seeks to modernise the operations of supreme planning authority.

Following the signing, President Ramkalawan explained that the legislation has been in limbo for quite some time now between the National Assembly and leaders of the former administration. He thanked all the professionals for their efforts in finalising the new piece of legislation.

“The law will control everything to do with planning and construction in our country, so it is important for the Seychellois people to know that we all have a role to play to ensure the law is abided by when there is a development. We have taken all precautions to ensure that when it comes to the physical planning of Seychelles, it is not just a question of government but it is a question of a partnership. People need to know what is happening in their community and the new Act does just that,” the President pointed out.

“It is no longer just the executive taking important decisions, but there is the involvement of the community. For example, prior to the construction of a project they can access information through district authorities, so they too can have a say in what is happening in their communities. I therefore call on one and all to show more interest and that all agencies concerned also play a more prominent role,” President Ramkalawan stated, recommending that each citizen get accustomed with the legislation.

The Physical Planning Act guides physical development and land use management in the country. It is derived from the Country and Town Planning Act (1972) which has guided development for nearly 50 years.

In addition to making provisions for citizens to be more involved in the planning and construction process within their own communities, the law provides for a more open process in the appointment of members of the board and the appeals board within the entity.

As explained by the chief executive of the Seychelles Planning Authority Angela Servina, the authority faced serious challenges in taking decisions and handling certain situations not provided for by the old law, considering more advanced developments in the sector over the years.

With regard to appointments to the appeals board, it was in the past constituted of members appointed by the minister. With the enforcement of the Act, individuals can apply through the Constitutional Appointments Authority (CAA)  and the President will then make the selection based on the recommendations. The appointment of board members will also be more open, where interested persons can express their interest for the minister and CEO to make recommendations to the President.

“We also have a provision to allow us to, with regard to any development submitted to us, we can take the necessary measures to ensure, especially if the development borders the beach,  that public access   is not compromised,” Ms Servina stated.

“We also have important provisions for actors involved in construction, contractors, engineers, and architects. The law places a lot of emphasis on fines which have been reviewed. We have been faced with so many issues in the past in relation to contractors who do not honour their obligations under the law. They failed to follow plans and provisions, so we now have legal provisions to deal with these matters in order to curb illegal developments and breaches of conditions that were frequent,” Ms Servina explained.