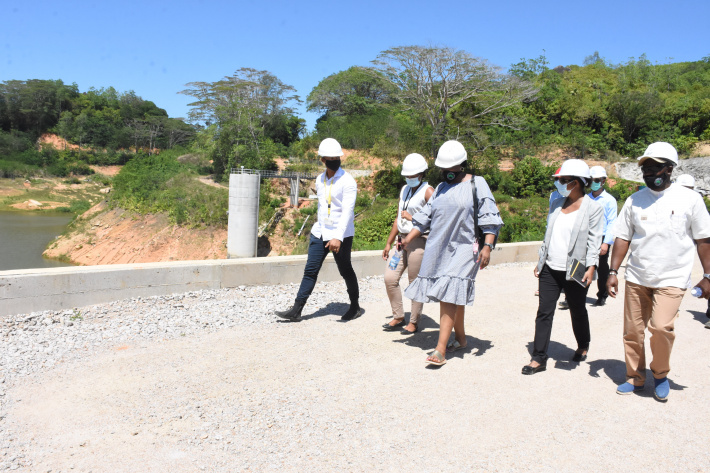 Despite several delays due to various technical issues, along with other factors, including the Covid-19 pandemic restrictions, the African Development Bank is satisfied with the progress on the extension works being carried out on the La Gogue dam.

The director general for regional development and business delivery at the office for East Africa of the African Development Bank (AfDB) – which is financing the project – Nnenna Nwabufo gave the confirmation yesterday shortly after visiting the project site at La Gogue.

The extension works, which consist of increasing the amount of water stored by the reservoir from 1 million to 1.6 million cubic metres, is being carried out by Sinohydro and overseen by the Public Utilities Corporation (PUC).

It involves raising the dam’s dyke by 6 metres with an artificial waterproofing system consisting of a membrane anchored in a trench dug in the existing core.

Ms Nwabufo, who was accompanied by the chief executive of the PUC Joel Valmont and project manager Erna Victor, said since their last visit in March 2020, a lot of work has been done and they are very impressed by the amount of work carried out.

She explained that finishing touches are very important since it involves assessment of what has been done and in most cases reinforcement work.

Ms Nwabufo also noted that they are really satisfied with the progress and added that she is certain a lot more would have been done if the Covid-19 had not slowed down the work process.

“We are happy that everything is back on track and things are moving on,” she added.

In terms of efficient spending of the fund, Ms Nwabufo noted that it is the joint responsibility of the AfDB and the PUC to ensure that the project is carried out efficiently and that the final outcome is greatly beneficial to the country.

In that aspect, she explained that since the final product will greatly benefit the country with an additional 60% of water storage capacity, the fund is being well spent and managed.

Regarding the additional fund, Ms Nwabufo explained that due to standard, environmental, durability and sustainability issues are not always evident at the beginning of such a project, until you come on ground.

“It is when you start working on the project that you see the additional requirements that are needed to reinforce its capacity and durability,” noted Ms Nwabufo, who further added that additional financing is required after the experts looking at the proposal from the PUC have evaluated it and have determined that there is a need for the additional funding.

According to Ms Victor, for the construction, the AfDB has funded R160 million while the rest of the contract is being financed by the PUC at a cost of around R25 million.

As for the additional work which costs around R98 million, R85 million is being funded by the AfDB.

Additional works to be undertaken on the project include stabilising the slope on the South saddle dam, one of the lowest areas within the La Gogue dam, as well as remedial works to control seepage on the far-right of the dam’s embankment (right abutment), where part of the dam’s clay core was found to be absent.

Piling works are expected to be undertaken on the right abutment to address seepages.

This solution will consist of the construction of a 37m long secant pile wall with piles of 1m in diameter and an average depth of 30m.

In addition, jet grouting injections will be undertaken underneath the spillway to address seepages. 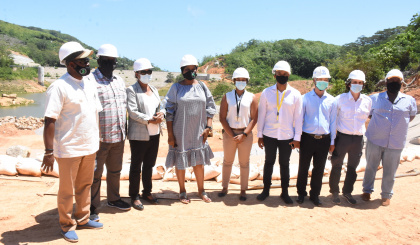