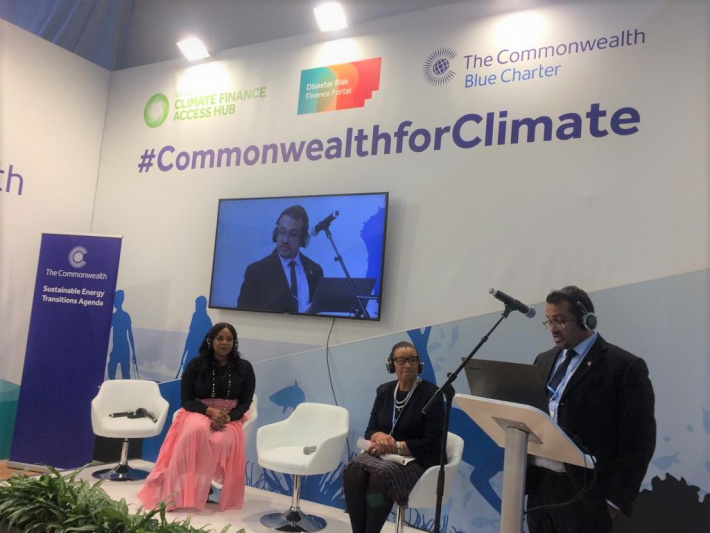 The event was meant to provide participants with the status of the NDC implementation in Africa. It also provided an opportune time for the launch of the hub’s flagship report highlighting the ambitions committed by the African continent, inclusive of the critical actions identified for delivery in line with the Paris Agreement.

As the keynote speaker at the event, Minister Hassan focused on the importance of partnerships to combat climate change which he described as a “global impending crisis”.

“We call for development partners to join in to work collaboratively and effectively in their provision of support to countries to ensure that the funds available are used effectively and provide real impact on the ground.”

The Africa NCD Hub was launched in 2017 as a “collaborative platform to support African countries to effectively deliver on their commitments made in the Paris Agreement”.

Seychelles has updated and submitted its NDC in July 2021, therein containing ambitious targets in ensuring that climate change considerations are integrated into key sectors by 2030.

Minister Hassan was honoured and privileged to have also been invited to deliver the keynote address at the ‘Launch of Toolkit for Developing Investment Grade Business Cases for Clean Energy Investments in Small Island Developing States (Sids)’. This event was co-hosted by the Commonwealth secretariat and Sustainable Energy for All.

As many other Sids Seychelles’ dependence on imported fossil fuels remains prominent. Nevertheless, significant strides have been made over the years as the country strives to reduce its carbon footprint as the minister noted in his keynote address.

“On our part, Seychelles has made significant advances in renewable energy, in particular wind energy and solar photovoltaic (PV). Today, through the wind farm in the harbour we are saving over R10 million from fuel expenses per year. We have more than 5MW distributed PV generation capacity spread across both residential and commercial sectors. We have 6MW utility-scaled PV system on Ile De Romainville and I am pleased to say that we have an ongoing 5MW floating PV plant on marine environment which is on track to being the first-utility scaled PV plant on marine environment in Africa.”

The launch of the toolkit during the event saw Seychelles’ experience being used as a business case whereby the toolkit is being trialed as the country paves the way with its renewable energy transition.

Debt swap for Climate and Nature

On the same day, Minister Hassan also attended an event on Debt Swap for Climate and Naturehosted by the International Institute for Environment and Development.

Addressing the event, Minister Hassan pointed out that Seychelles is already leading the way when it comes to the debt swap initiative and is increasingly gaining attention in that regard on the international scene.

He noted the world’s first debt for nature swap for ocean conservation in 2016 in which Seychelles successfully negotiated a UD$21.6 million debt buy back.

“Another debt-swap is something my team and I have been discussing. It would provide us with the much-needed investment to support our renewable energy and marine conservation goals.”

Minister Hassan further noted that Seychelles is committed to share its knowledge and experience in this area, as more countries, like Belize, venture into this space.

Minister Hassan was a panelist in one of the sessions during this event which focused on ‘Financing a More Resilient World’. The event probed into innovate financing approaches and how financing can be accessed by countries in building climate change resilience.

The Seychelles’ innovative debt for nature swap for ocean conversation of 2016, was an initiative which Minister Hassan used to illustrate how countries can access finance from partners, in order for small island developing states to build resilience against climate change.

He said the funds have been used to develop and implement climate risk reduction and social resilience plans.

This event was chaired by Alok Sharma, the President of COP26. 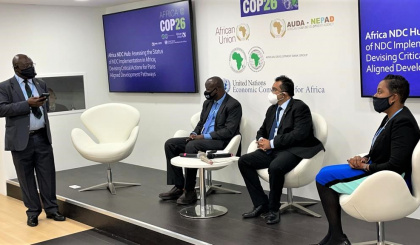 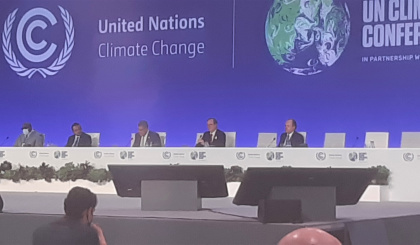 Minister Hassan as a panelist at the Finance Day Presidency Event 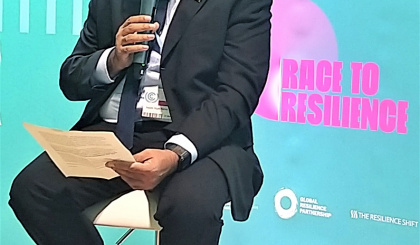 Minister Hassan addressing the audience at the Debt Swap Event