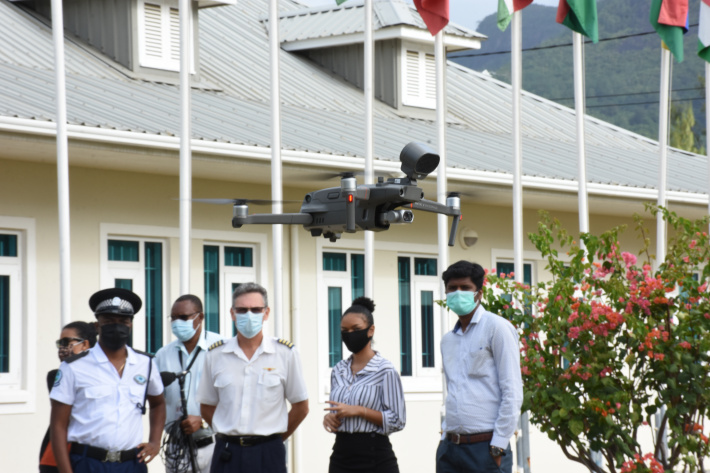 The new DJI Mavic 2 Enterprise drone will help pave the way for a new generation of work within the police force (Photo: Thomas Meriton)

With the ongoing Covid-19 pandemic situation, the Seychelles Police Force has resorted to innovative means to stay connected and ensure service continuity, Commissioner of Police Ted Barbé has said.

Mr Barbé made the statement yesterday afternoon before accepting the force’s first ever drone fromXavier Estico, the head of the division for science, technology and innovation within the Ministry of Investment, Entrepreneurship and Industry.

The drone is part of a joint project between the force and the Ministry of Investment, Entrepreneurship and Industry, aimed at venturing in a more exciting and innovative policing process.

Minister for Internal Affairs Errol Fonseka, along with his counterpart from the Ministry of Investment, Entrepreneurship and Industry Devika Vidot were among those present to witness yesterday’s milestone.

The new DJI Mavic 2 Enterprise drone is here to pave the way for a new generation of work and is the world's most powerful and smallest drone built for commercial drone operators.

Mr Barbé said the new programme is geared towards innovation in policing and also to better the service that the force preciously rendered to the public.

He explained that in the past, they have been resorting only to boots on the ground, assisted often by dogs and most of the time the officers had to navigate through hostile terrains, thus exposing themselves to imminent danger while discharging such tasks.

Mr Barbé also added that in the past, the force has solicited outside assistance from local drone owners and operators for a helping hand.

He, however, noted that the acquisition of the new drone does not mean that they will no longer need the above-mentioned assistance in the future, but that it will rather be a tremendous boost to the many forthcoming operations.

The aim of the training was to equip the Seychelles police force with modern technology that will help in the line of duty while responding to scenesof special operations, search and rescue, and also as adeterrent to prevent crimes.

Among the topics covered during the training were drone feature and their effects, meteorology, police unmanned aerial system, understanding maps and mapping in a three-dimensional perspective.

The Mavic 2 Enterprise drone comes with a variety of innovative and advanced controls as well as an extended port for mounting additional accessories that enable users to expand the drone's capabilities in a range of close operations including inspections, fire response, search and rescue missions.

It features a high-resolution 12-megapixel camera alongside a FLIR Thermal Sensor with a three-axis gimbal system for stable and smooth footage. The thermal imaging sensor supports adjustable parameters for emissivity and reflective surfaces for better heat detection in all scenarios.

It is also made with brand new features to help protect the integrity of photos, videos, flight logs and all other data generated during sensitive flights.

As an industry first, the Mavic 2 also incorporates 24 GB of onboard data storage and password protection, creating accountability for all access to the drone's stored data and functions. 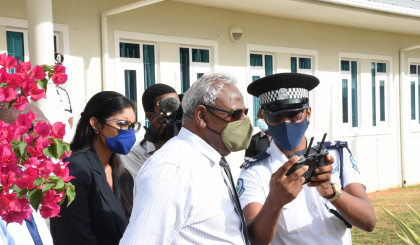