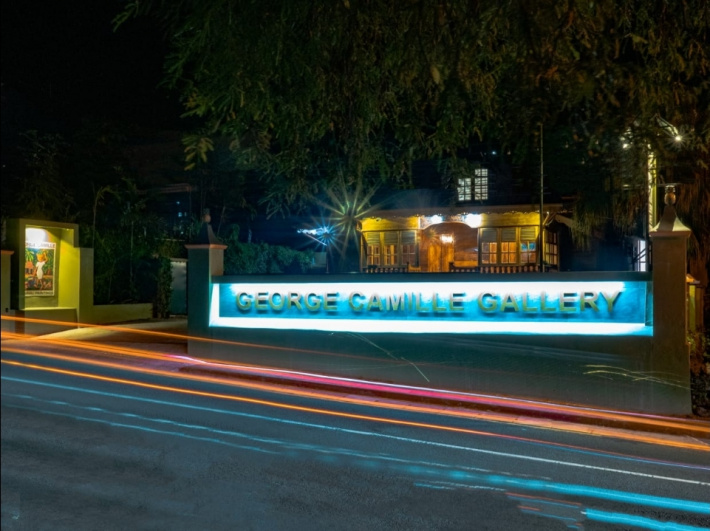 Other than being the home of exotic art pieces by local artist George Camille, the famous Kaz Zanana art gallery, which has been a landmark building in Victoria since the early 1900, will now be a haven, offering a rest spot for those who wishes to submerge into a stress-free and relaxing mode.

Located on Revolution Avenue, the wooden Creole style gallery and café has just underwent major renovation work, giving it a more modern touch and atmosphere, while making it more welcoming to art enthusiasts, tourists and the general public.

In the art business for nearly 40 years, Mr Camille, who has been exhibiting both locally and all around the world, explained that with the constant evolution in the industry, he felt that it was time to step up his game and be abreast with the growing trend of the business.

The Kaz Zanana gallery was initially opened in 1996, four years after Mr Camille bought the place, being fortunate since it was next door to his mother’s house.

The building itself was initially built entirely from local hardwood in 1915, and it was the craftsmanship of local artisan Louis Volcère who brought back life into the soul of the old Creole house in 1997.

As a local tradesman, Mr Volcère used traditional tools, along with local timber to rejuvenate the building with passion and feeling, restoring its traditional features.

Kaz Zanana was functioning as a full gallery-restaurant until 10 years ago when it was renovated again with a rear part to it.

Mr Camille explained that even if the place was doing well as both gallery and restaurant, he felt that it needed a balance and since there are not many galleries in town, he decided to focus more on promoting the place as a gallery.

Revamping the place into a top-notch gallery

It was about three years ago that Mr Camille came up with a plan to revamp the place and architect Vincent Ah-Time was the one who came up with the new concept.

Then came the lockdown, due to the Covid-19 pandemic, and this, Mr Camille described as a blessing in disguise as it gave him sufficient time to execute the project since the place was closed and there were no tourists in the country.

“That was the positive aspect of the lockdown for me,” explained Mr Camille who added that with no tourists around, he managed to carry out work without any pressure.

The core of the renovation work was to marry the old and new aspects of the building, with the intention of keeping the original architectural features, consolidating it as cultural space.

The rear side of the building which was a restaurant has been transformed into a white cube, allowing the owner to display bigger paintings, while also taking into consideration the most important thing in a gallery which is light.

It is lighting that gives a painting structure; showing our eyes that there are objects and shapes to be seen, while it is this structure that keeps our eyes interested and focussed on the scene that we are looking at.

Whether we realise it or not, how a piece of art is lit can greatly affect how our eyes perceive it.

As for the café, it has now been baptised ‘Elixir’ – magical potion – and it will be run independently, starting Monday July 19.

The outside of the gallery has been turned into an ‘oasis’, or art garden where people can sit and enjoy their beverages quietly, surrounded by artworks and other interesting features.

The trellis out of recycled cables for an ongoing vine is also in place, bringing a more authentic touch to the environment, along with a water feature.

Mr Camille said he is planning on bringing more artwork into the garden to boost the appearance, thus turning the place into a sanctuary, giving people the choice between an inside and an outside artistic environment.

Welcoming other artists and the public to Kaz Zanana

A seasoned artist with loads of international exposure under his belt, Mr Camille noted that there is also a place for foreign guest artists to showcase their work at the Kaz Zanana.

He explained that the place will focus solely on professional artists who have reached a certain level in the trade, while his other gallery will still host young and budding artists.

“At Kaz Zanana, I want to raise the bar in terms of the exhibitions we have,” he added.

The white cube will also be used for other artistic purposes such as viewing of art films and critics, launch of albums, among others.

Mr Camille further added that he wants people to be less reluctant when it comes to entering a gallery, especially Kaz Zanana which other that artworks has also other features to admire, such as the architecture.

He said he wants the place to be adopted as a landmark in Victoria, offering a jovial and convivial atmosphere and environment.

“The commitment behind the renovation of Kaz Zanana was to make it vibrant and become a public attraction where everyone feels welcome,” added Mr Camille.

The Kaz Zanana is the place to see a wide range of Mr Camille’s original canvases, assemblages, embossed coppers and limited edition of paintings that are for sale.

Born on La Digue, Mr Camille studied art at the then Seychelles College to A-Level, before he was awarded scholarships to further his studies at the Blackheath College of Art and Goldsmiths College, both in London.

A number of important collaborative friendships with fellow artists also helped to focus his direction as an artist, most notably French artist Mikel Chaussepied who in 1992 introduced him to the techniques of etching.

He was also selected to represent Seychelles at both the 56th and 57th Venice Biennale in Italy.

He has original works in many private collections and has completed a significant number of public and corporate commissions.

If you are an art lover, Kaz Zanana is the place to visit. 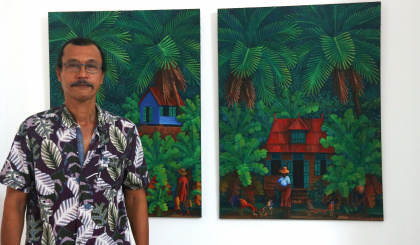 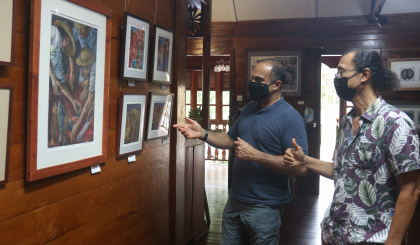 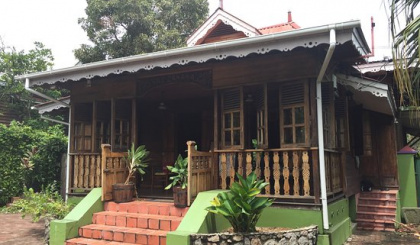