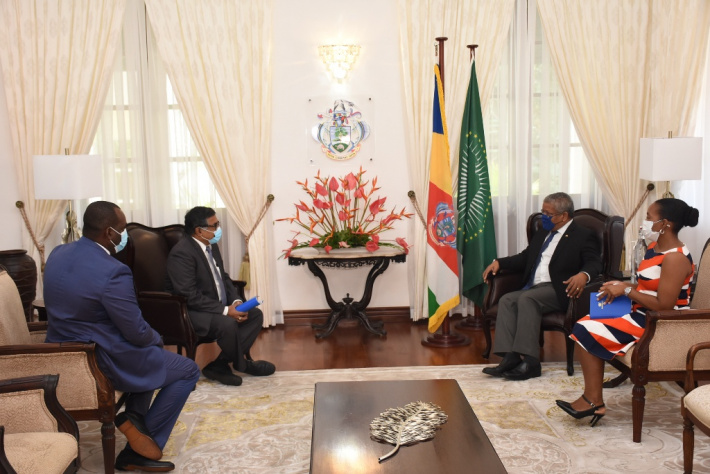 “Seychelles is a very important place for Airtel, with a lot of emotional connections as it was the first ever place outside of India that the company started to operate in 1998,” managing director and chief executive of Airtel Africa, Raghunath Mandava has said.

He was speaking shortly after paying a courtesy call on President Wavel Ramkalawan yesterday morning at State House where they discussed possible future local investments and services by the company.

Mr Mandava, who also met with Vice-President Ahmed Afif, was accompanied by the managing director of Airtel Seychelles, Amadou Dina.

Mr Mandava explained that Airtel has and will continue to invest in Seychelles despite the tough Covid-19 pandemic period. He added that evidence of more development in the country means that Airtel is growing vastly.

“More shops and new offices are being opened, but most importantly a data centre,” noted Mr Mandava.

In relation to the high cost of data in Seychelles, Mr Mandava explained that since Seychelles is a small country, far away from everywhere else, it needs one of the longest cables running from various parts of the world.

This, he said, is unfortunately a very high cost activity.

“But in spite of that we are trying to discuss and find solutions to see how the government and our operators will work together to lower the cost,” said Mr Mandava who further added that even in the tough economic situation Airtel has managed to increase its towers and also its development services.

“Airtel will continue to invest in Seychelles and get closer to its customers,” concluded Mr Mandava.

Mr Mandava took over as managing director and chief executive of Airtel Africa on January 1, 2017 after having served as the company’s chief operating officer.

As for Airtel Africa, it is a leading provider of telecommunications and mobile money services, with a presence in 14 countries in Africa, primarily in East, Central and West Africa.

It offers an integrated suite of telecommunications solutions to its subscribers, including mobile voice and data services as well as mobile money services both nationally and internationally.

The group aims to continue providing a simple and intuitive customer experience through streamlined customer journeys.