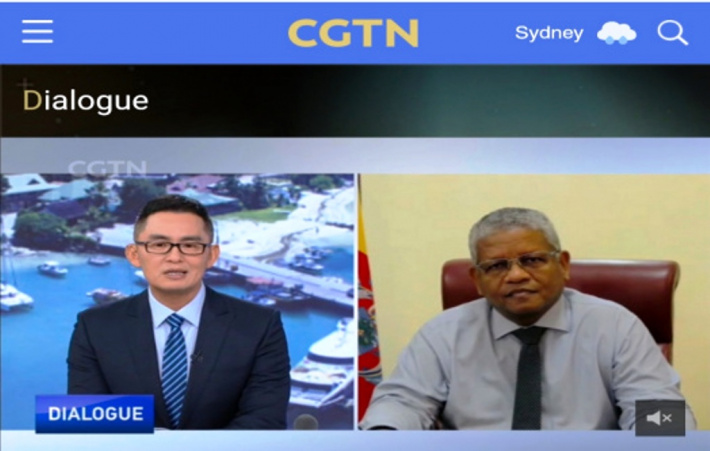 President Ramkalawan with host Zou Yue during the interview

‘Vaccination was our number one priority when we took office’

“When we came into office in October 2020 the Covid-19 situation had exploded around the world. As part of our strategy since the vaccine was being developed, we put vaccination as our number one priority,” said President Wavel Ramkalawan who was featured on China Global Television Network (CGTN) last week.

Mr Ramkalawan sat down with anchor Zou Yue on his talk show ‘Dialogue’ and the interview began with Mr Zou asking the president about the Covid-19 situation in the country and how he and his government managed to make Seychelles one of the most vaccinated countries in the world against Covid.

Adding to that, he said the country was very lucky because through a state visit to the United Arab Emirates, Sheikh Mohamed bin Zayed Al Nahyan, Crown Prince of Abu Dhabi and Deputy Supreme Commander of the UAE Armed Forces, offered to give Seychelles 50,000 doses of the newly manufactured Sinopharm vaccine and in January the country launched its vaccination campaign with him being the first person to take the jab.

He added that although Sinopharm is the vaccine which the majority of the population has taken, they received additional vaccines such as Covishield and Sputnik-V.

“We have vaccinated over seventy percent of our population and the 70,000 target population mark has been reached,” stressed President Ramkalawan.

The president also noted that during the early days the Sinopharm, Sputnik-V and Covishield were the only vaccines that were available to the country, furthermore he added that through the Covax programme many African countries received their first doses of the vaccine much later than March so the Sinopharm vaccine came as a Godsend for Seychelles.

Regarding the current state of the pandemic in the country, the president acknowledged the surge that we had two months ago and noted that it was as a result of people who had not been vaccinated.

He continued by adding that Sinopharm and the other vaccines have saved the country and right now Seychelles is still vaccinating its citizens with the Sinopharm vaccine.

“I understand the vaccine politics that is going on in the world. The only thing I can say is that we have used Sinopharm and a couple of others which the west have doubts about, and what I have to say is that these vaccines have worked. What works is what is important,” affirmed President Ramkalawan.

Another key point the president made was the different myths regarding the vaccines, for instance people will say that it was developed too quickly or that there is a chip that is inserted in the body through the vaccine.

“At the end of the day it is a shame that people think that way because the only weapon that we have against Covid-19 right now is vaccination, and this is why many countries have started opening up again and those who have not received the vaccines are those who are putting the advancement of the country in jeopardy,” added President Ramkalawan.

Talking about the reopening of the country, the president said we are a country that depends mainly on tourism so it was important for us to get our economy back on track which is why on March 25 we reopened the country with the only requirement being a 72-hour negative Covid test.

“The economy is redoing itself and things are moving positively. However, one thing that the world needs to understand is that Covid is here to stay and we have to learn to live with it and take precautions. In a couple of years’ time people will see Covid as we view the common cold.”

He added that the world is moving in the example that Seychelles gave by putting emphasis on vaccination.

“There are many variants ravaging the world right now and we have to take the necessary precautions as this is what will protect us, the basics that we need to follow to bring Covid under control and not let our guards down,” emphasised President Ramkalawan.

Mr Ramkalawan further added that in Seychelles we are also vaccinating foreigners working in the country on a voluntary basis. On the other hand, he continued by saying that further restrictions will be placed on those who have not been vaccinated to encourage them to come forward and take the jab.

Regarding countermeasures to economic difficulties, Mr Ramkalawan said the challenges are tough as we are not out of the woods yet, but we are making progress. The president also touched on the International Monetary Fund (IMF) programme to get budget support.

“We continue to be grateful to our friends like China who continue to come to our aid when we call on them; the Chinese government and businesses made donations to our Covid relief fund and for that I am very grateful,” he said.

Another point he talked about was diversifying our economy, putting emphasis on fisheries. He noted that the country will be launching its fish processing facilities as well as diversifying agriculture.

“Instead of putting all our eggs in the tourism basket we are looking at other avenues and there are also many investors bringing in foreign direct investment and investor confidence is also on the rise,” asserted President Ramkalawan.

“My administration is also seeking ways for us to build the economy anew so that it becomes stronger,” he said.

“The main message was that our friendship is a stable one and we will continue to respect each other and continue to work together. It was an honour to receive the Foreign minister and he quite enjoyed the visit,” he said

President Ramkalawan continued by saying that Seychelles and China have celebrated 45 years since the establishment of diplomatic relations, “two independent states respecting each other and forging ahead to seek the best for the world”.

In relation to the tense relationship between India and China, President Ramkalawan said that he does not see Seychelles in any delicate situation as we are friends with both countries.

”Our policy is very clear, we do not interfere in any country's internal affairs. Earlier this year, I invited all our diplomats to visit the Aldabra atoll, the Chinese ambassador and Indian high commissioner were there. So if Seychelles can become the country where all nations can be together and talk peace then I will be the happiest person,” said the president.

Climate change is another problem that is affecting not only Seychelles but also other small islands developing states (Sids) and the rest of the world. President Ramkalawan touched on this topic and added that when he was at the Austrian World Summit organised by President Van der Bellen and Arnold Schwarzenegger, the topic of environment and climate change was brought up.

“The plea that I made in the meeting was that Seychelles is small and our carbon footprint is next to zero, however the effects of industrialisation by big counties have a direct effect on us here in Seychelles. When the glaciers melt, when industries are directly involved in the warming of the earth we feel the effects because with the rise in sea level some of our islands may completely disappear in a couple of years, So my plea was that we are the victims and therefore industrialised countries must come to our help and this will be the message that I will be delivering in the 2021 United Nations Climate Change Conference.

“I think that all industrialised countries have much more to do and I think they can do it, they have already committed 100 billion dollars in Paris but that money was not forthcoming, so now we want them to put that money to good use and give concrete actions as the time is now,” related Mr Ramkalawan.

Mr Ramkalawan also noted that on a daily basis he calls on the people and reminds them of their responsibilities and the need to make sacrifices as we are living in crucial times.

“I want Seychellois to become giants and I am hopeful Seychelles will emerge a much stronger nation,” added President Ramkalawan.

A prime time daily English talk show on CCTV news, ‘Dialogue’ reaches viewers across China and over 80 million subscribers around the world.

Mr Ramkalawan thanked the Chinese and invited as many Chinese tourists to come to Seychelles as we are currently working on direct flights between China and Seychelles. He also invited Chinese businessmen to come and invest in the country and create a win-win situation for both China and Seychelles.