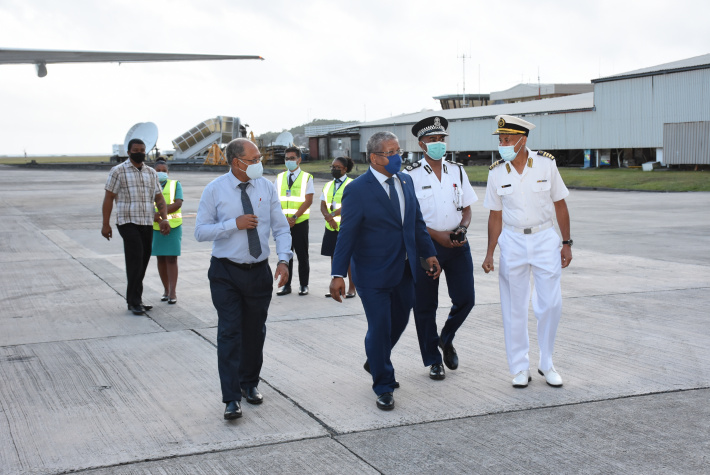 President Ramkalawan upon his arrival at the airport yesterday (Photo: Patrick Joubert)

President Wavel Ramkalawan has said that his administration is working in the interest of the country and the people of Seychelles and not for personal reasons whenever he and others in his administration make an overseas travel.

President Wavel Ramkalawan made the statement upon his return home onboard an Emirates flight from Dubai yesterday morning after attending a high-level forum of the fifth Austrian World Summit, the Schwarzenegger Climate Initiative themed ‘Healthy Planet ‒ Healthy People’ and a state visit in Austria.

He was met at the airport by Vice-President Ahmed Afif, the Commissioner of Police Ted Barbe and the Chief of Defence Forces, Colonel Michael Rosette.

President Ramkalawan was answering the press regarding comments by some members of the public in relation to his travel to Austria in this time of economic difficulties the country is going through coupled with a pandemic situation.

He was in Austria since Wednesday June 30, 2021 at the invitation of Austrian President Alexander Van der Bellen.

He explained that he was invited by President Van der Bellen to attend the summit and for a state visit as the Austrian leader had wanted his invitees to be physically present for better discussions and visits now that the country has removed restrictions related to Covid-19 and reopened her borders.

“We could have done it through zoom, but at the moment the world is seen to be missing the personal contact. We got the invitation and we used the opportunity,” President Ramkalawan said, noting that the 26th UN Climate Change Conference (COP26) to take place in November 2021 in Scotland will also be physically attended.

President Ramkalawan explained that the trip has also allowed his minister for Foreign Affairs and Tourism, Ambassador Sylvestre Radegonde and acting chargé d’affaires at the Seychelles embassy in Paris, France, Ralph Agrippine, both of whom accompanied him to Austria, to visit Hungary where from fruitful discussions, the country will also help Seychelles in her negotiations with IMF and further business opportunities between the countries.

Minister Radegonde and Mr Agrippine also got to visit Seychellois students there. He further explained that Minister Radegonde and Mr Agrippine were also in Croatia on Sunday June 4, 2021, to visit the Seychelles consulate and they managed to hold talks with the president of the international Judo Federation Marius Vizer, who has pledged to help with the development of judo in Seychelles.

“When you look at it, the invitation has been beneficial for Seychelles,” President Ramkalawan said, reiterating that the travels are not for personal reasons other than for the benefit of the country and that the country is on the right track.

“Under this administration nobody will be made to disappear, nobody will be tortured or put in prison without trial and when the moment arrives for us to leave there won’t be a need for a Truth, Reconciliation and National Unity Commission (TRNUC) as we are working for and in the interest of Seychelles,” the President said.

With regard to his official visit, the President who on his arrival yesterday went into a special cabinet meeting for discussions with the International Monetary Fund (IMF) representatives who are in the country, stated that Seychelles will get the support of Austria in its negotiation with the monetary body.

He further stated that apart from Austria’s support in our debt negotiation with the organisation, he also discussed with his Austrian counterpart the possibility of providing scholarships to Seychellois students among other topics such as bilateral cooperation in tourism, protection of the environment and creating business opportunities.

“This is one area our administration puts a lot of emphasis on. Wherever we go, we try to find out where we can get scholarships for our Seychellois,” President Ramkalawan said.

President Ramkalawan added that he also discussed support to the National Brass Band in terms of training and new equipment as he wants the band to improve its standard.

The President stated that now that Austria has opened up her borders to the outside world he expects more Austrian tourists, as well as others from other countries where restrictions are being lifted, to visit Seychelles.

With regard to the summit, President Ramkalawan said that small island developing states, including Seychelles, must be compensated for taking the brunt of climate change and pollution.

He explained that the developing states are responsible for the gas emission causing disappearance of small islands and erosion of coastal areas through rising sea levels, among other climate change calamities.

He noted that they should bear the cost in the form of compensations for the restoration and preventive measures against climate change.

President Ramkalawan said that the media and the Ministry of Agriculture, Climate Change and Environment should do more to educate the public on the effects of climate change to our islands and livelihood. 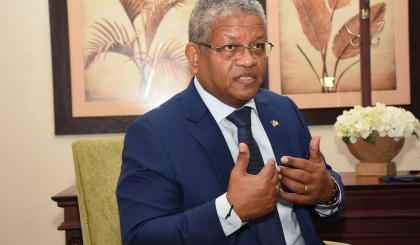 President Ramkalawan speaking to the media in the VIP Lounge (Photo: Patrick Joubert)