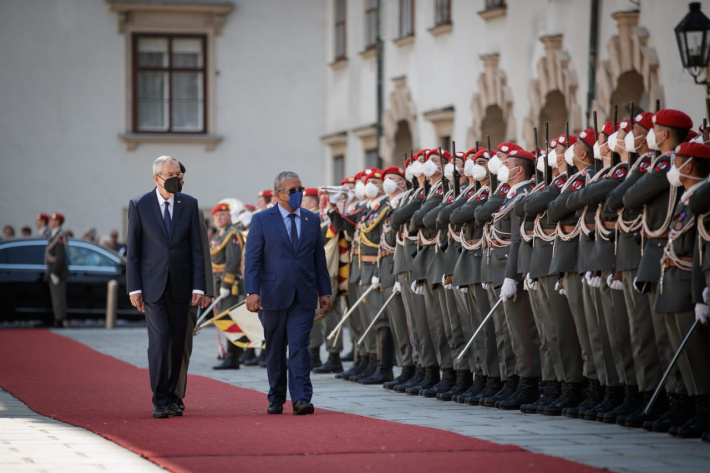 ‘We’re on the receiving end,’

President Ramkalawan is in Austria since Wednesday at the invitation of Austrian President Alexander Van der Bellen.

He told the forum, attended by President Bellen and former bodybuilder and California governor Arnold Schwarzenegger, that he is basically making a plea to the developped countries, because all the expressions that small island developing states use as far as the environment is concerned, when they talk about rising sea level, coastal erosion, what is happening to the corals, this is basically a result of industrial developments.

“Poor little Seychelles with a population of less than 100,000, with no great industrial development suffers the consequences when your glaciers melt. We are an archipelago of 115 islands and every day we see that our islands are slowly being eroded away. So we will soon not be an archipelago of 115 islands but of very few islands. So, help us as far as financing is concerned. When we talk about rock armouring (to preserve) our beautiful beaches that lie at the centre of our economy. Without the beautiful beaches Europeans would not be flying down to Seychelles. The sea, sand and sun concept would not be there,” said President Ramkalawan.

He added: “There’s got to be justice. There must be one sister country helping others, organisations helping those that are taking the brunt of climate change and pollution.”

Mr Ramkalawan told the forum that in 2019, one of his sons was part of a team that went on a cleaning expedition to the Aldabra atoll, which Seychelles has given to humanity, and within a couple of weeks they had collected over 26 tons of litter.

“Those were collected on some beaches that would not have seen a single human being in decades. So it is from elsewhere polluting little Seychelles.

“What is Seychelles doing? Small in land mass, but our exclusive economic zone (EZZ) is 1.4 million square kilometres making it bigger than Austria, even Switzerland. We have already committed 30% of our ocean to conservation. Seychelles and Mauritius are now overseeing the joint management of the Saya de Malha bank and we have the largest sea grass bed which is larger than Switzerland. We know the important role the ocean plays, that’s why we are protecting it for the world. So we are basically telling to the world ‘look at us, help us. We are small, but we are playing our role and will continue to do it. The commitment is 100% and the time to act is now.

When asked if he thinks industrialised countries which have caused most of the CO2 will deliver on their pledges, President Ramkalawan answered: “Please bring about the change, we’re tired of seeing those huge figures. We don’t want to see beautiful figures on paper, we want to see action. I was very happy when President Bellen said yesterday (Wednesday) that we have wasted 30 years. I must say ‘Arnold you’re an inspiration’.”

Meanwhile President Ramkalawan got a warm welcome when he arrived in Austria on June 29 at the start of a three-day official visit to the landlocked European nation.

The two Presidents made short statements before taking questions from journalists of the Austrian Press Agency and Austrian Broadcasting Corporation.

President Bellen remarked that tourism was a key industry in both Seychelles and Austria and both countries were hard-hit by the Covid-19 pandemic which last year caused Seychelles’ Gross Domestic Product to shrink by twice that of Austria.

After thanking President Ramkalawan for accepting his invitation, President Bellen pointed out that Austria and Seychelles must “cooperate more than in the past” as the two countries have common interests and experience sharing will be mutually benefitting.

One subject on which the two heads of States are in sync is fighting climate change. President Bellen, who also leads the Austrian Green Party, echoed President Ramkalawan’s view that “we have passed the point of beautiful speeches and now is the time for action” when he said, “we have wasted over 30 years”. The two Presidents agreed to take this message of the urgency of action on climate change to the 5th edition of the Austria World Summit and CoP26 in Glasgow, Scotland later this year.

Three areas in which the two countries could deepen bilateral cooperation are tourism, protection of the environment and creating business opportunities. President Ramkalawan said Austria could help Seychelles add value to its tourism product so that tourists who visit the islands get real worth for their money, while the Chambers of Commerce of Austria and Seychelles could work together to find and exploit more business opportunities in Seychelles. On protection of the environment, President Ramkalawan pointed out that at CoP26 in Glasgow, Seychelles and Austria would add their voices to those of other small nations to say that we live in an interconnected world and that all countries need to act quickly against climate change.

When asked what he thought of climate change as a President and also a priest, President Ramkalawan said that the two roles have one thing in common which is creation, meaning the need to preserve nature, thus our human race and other species and of course our habitat.

He said that in his double role as a President and priest he could sensitise people on the need to protect the environment and get them to take the necessary actions. He illustrated his point with the example of tuna fishing. He said that Seychelles had the biggest fishing agreement with the European Union in the Indian Ocean but at the same time yellow tuna is under threat. He explained that in its negotiations with EU, Seychelles had insisted on the sustainability and controlled exploitation of the species.

In the evening the President attended a dinner hosted by former Governor of California, Arnold Schwarzenegger, who will be co-chairing the Austria Summit with President Van der Bellen.

The other members of President Ramkalawan’s delegation are the Minister for Foreign Affairs and Tourism, Ambassador Sylvestre Radegonde and Ralph Agrippine, acting chargé d’affaires at the Seychelles embassy in Paris, France.

The accompanying photographs show some highlights of President Ramkalawan’s first day in Vienna. 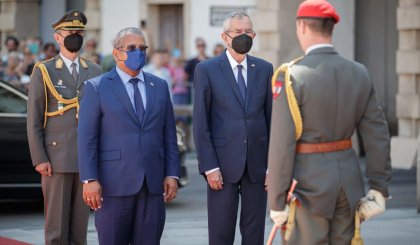 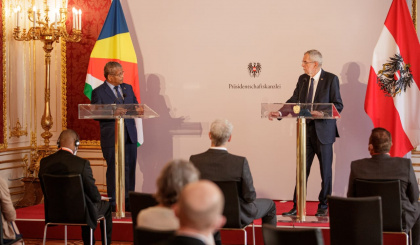 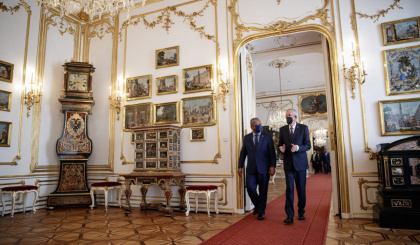 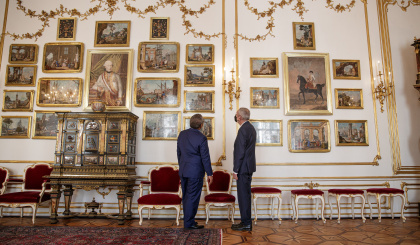 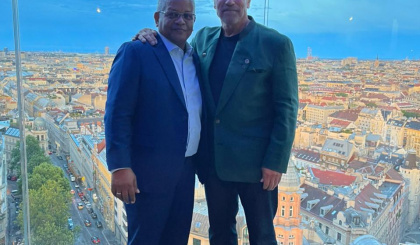 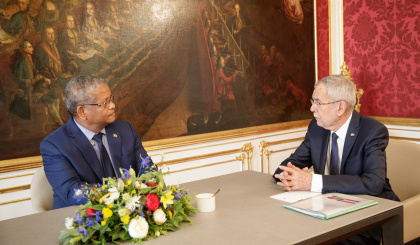