President Wavel Ramkalawan yesterday launched an appeal to individual citizens to have solidarity, to unify, support one another and to love Seychelles, in order to overcome and surmount the challenges and difficulties presented by the Covid-19 pandemic.

The President launched the plea in a brief ceremony held at State House to commemorate our National Day as well as the 45th anniversary of the independence of the Republic of Seychelles from Britain, on June 29, 1976.

To start his address, President Ramkalawan wished all Seychellois residing in and outside of Seychelles a happy National Day, seizing the opportunity to call citizens to action toward a more resilient economy, unity, peace and stability among ourselves, and a country which is exemplary to the external world.

“Today, we are gathered as a nation full of pride. This pride is about us, as a nation who vowed to live in unity and use our force positively, to persevere amid all adversity, and to put together values that will help us construct a nation. 45 years ago, we had a lot hope. We stood as a nation that was just born. Today, 45 years later, despite the challenges, and even challenges that are beyond us, we stand as a nation with dreams for all its children. During these difficult times, it demands that we all put in more energy. During these months when difficulties have enveloped us, we as the rainbow nation are being asked to unite together, through our different beliefs put our trust in God, hold His hand, and ask Him to lead us,” President Ramkalawan said.

“We will do this like our ancestors did. They supported one another, and this is what permits us, more than 250 years later, to stand proud, with Seychellois and Seychelloise who are qualified in numerous different domains, Seychellois and Seychelloise who are making this small Seychelles very proud across the world. Yes, brothers and sisters, in this country that we so love, this treasured country, there is no place for discrimination. There is no space for hate, but there is space simply for us to offer what is best in us, and for us to always stand and raise our flag with great pride,” President Ramkalawan stated.

He went on to pay homage to late former President James Mancham as the father of the nation, a man of great principle, and who was full of love in his heart, and as a major contributor towards Seychelles’ development. Additionally, President Ramkalawan paid homage to Dr Maxime Ferrari, a member of the first cabinet of ministers, who sadly passed away yesterday morning, offering sincere condolences to the family of Dr Ferrari.

In continuing his address, the President turned his focus to the pandemic, and the direction and vision he has for the country towards a more diversified economy, and a more resilient nation.

He launched an appeal for individual citizens to be more responsible, to play their role in the development of the country, and at this juncture, stopping the propagation of Covid-19, which has claimed the lives of many Seychellois since the first case was recorded in Seychelles in March 2020.

“We are presently in the process of trying to return our country to one which is normal. I mentioned that there is no space for hate, no space for division. Our country was in a situation in December, whereby it was going through a big problem. Our country was sinking, whether you accept it or not. If we had not taken the decision to give our people vaccines, whether Sinopharm, Covishield or Sputnik 3, Seychelles would be on its knees,” President Ramkalawan said.

“Let us show our solidarity, this is what June 29 demands of us. That we show solidarity towards our brothers and sisters, and that we, together, combat against Covid-19 so we can do much better,” President Ramkalawan added, thanking contributors towards the national immunisation campaign and Covid-19 Relief Fund.

As per tradition, the National Day ceremony kicked off with a military parade (albeit on a lower scale than usual) under the command of Captain Dave Mathieu.

President Wavel Ramkalawan was accompanied on his entry by members of the Seychelles Police Force (SPF), under the guidance of Corporal Richard Larue. Upon entering, the President was welcomed by Vice-President Ahmed Afif, Commissioner of Police Ted Barbe and Chief of Defence Forces Michael Rosette.

The President’s address was followed by a parade display, and Presidential salute.

The first group to enter the garden was the ‘Flag Guard’ under the command of Lieutenant Sandy Moncherry, with flag bearer Lieutenant Stan Tomking, escorted by Lieutenant Denis Jeremy and Lieutenant Dave Renaud. They were followed by Parade Commander Captain Dave Mathieu and Sergeant Major W02 Joseph Morel.

The parade was then joined by members of the police force, in a slow march. The platoons were accompanied by the National Brass Band Master Nilsen Ernest, and Band Major Brian Larue.

During a spiritual reflection by Marion Gendron, representing the Seychelles Interfaith Council (Sifco), she reiterated the President’s message for unity and togetherness and for citizens to live in love, unity and peace, as stipulated by all major religions.

To conclude the ceremony, the National choir interpreted ‘Isola Bella’. Entertainers Jones Camille and Faith Thande also performed ‘Sesel Enspir Mwan’ and ‘Sesel Annou Ini’. Distinguished guests were invited to sing along to ‘Meyer Plas Anba Lesyel’, a song composed by Jean-Marc Volcy and performed yesterday evening, for the people and friends of Seychelles, by Antoinette and Rosealette Dodin and photographs with the President following the ceremony.

The accompanying photographs show some highlights of the ceremony. 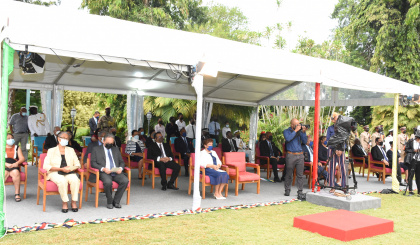 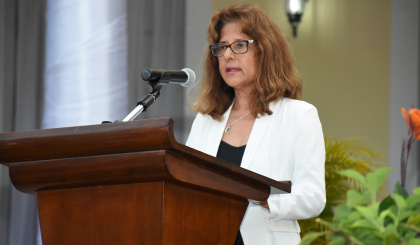 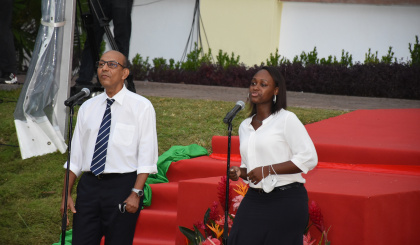 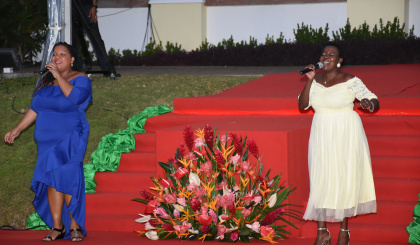 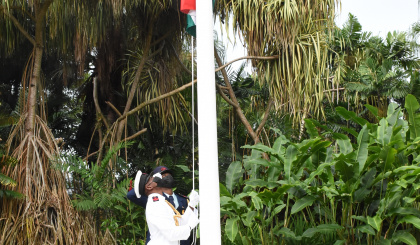 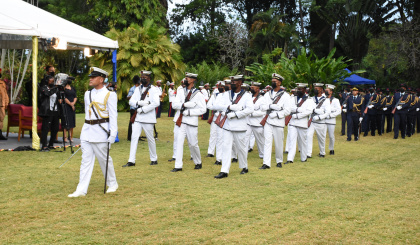 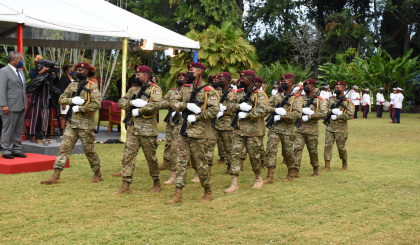 Cabinet considers a number of legal and policy memoranda |14.10.2021