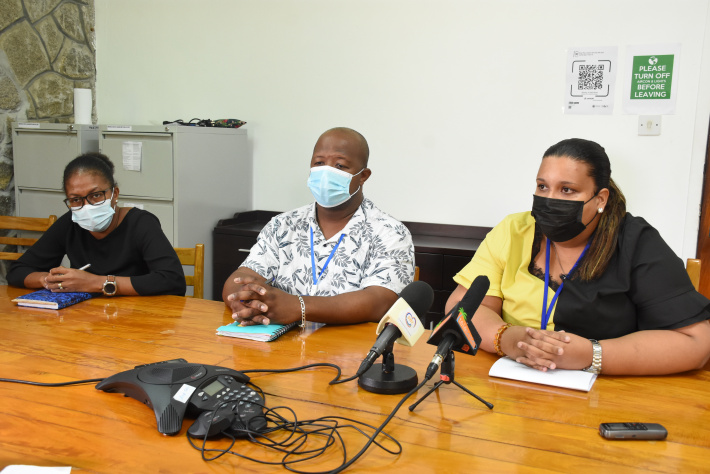 Following concerns raised on social media with regard to the ongoing activities at Anse à la Mouche (namely barging) in relation to the hotel development project there, the Ministry of Agriculture, Climate Change & Environment and the Town and Country Planning Authority (TCPA) have announced that the barging activity has since been halted until further notice.

The announcement was made by the chief executive of TCPA, Angela Servina, in a joint press conference with representatives of the two parties held at the environment department, Botanical Garden, yesterday morning.

The barge that was transporting some debris (mainly wood) from the site to the Providence landfill on Monday this week has been ordered to halt its barging activity on the beach at Anse à la Mouche as of Tuesday.

In presenting a declaration on the matter, Ms Servina said the Anse à la Mouche Development Company on the project (United Concrete Product Seychelles-UCPS) went on with the barging activity without waiting for the approval of a request it made to TCPA.

She said the TCPA received a request from the contractor in early March 2021 for permission to transport by barge construction materials to the site via the sea and that the authority wrote back on April 1, 2021 that it would consider the barging activity which was to be held under certain strict conditions.

She added that the contracting company had no objections to the conditions set and further informed that it will not carry on with the barging as it was on track with the construction work.

Among the set conditions were that the public should be informed of the activity, that the wood being cut down on the site be given to inhabitants who had requested for them, for road safety signs to be put up to alert people and to make known to affiliated authorities and agencies of the activity so that they would be present for monitoring purposes.

The request for the start of the barging activity was made on Thursday June 17, 2021 but without permission the activity was carried out on Monday June 21, 2021.

“Last Thursday evening we got a request from the contractor for permission to do the barging to the site and we were still considering the request when they moved in the craft on Monday morning and we were only alerted on this by the public,” she said, noting that a stop notice was given as the work had not received the necessary approval.

Ms Servina added that a meeting was held with the contracting company to which it agreed that it had not followed the due diligence and conditions set for transporting and removing debris from the site.

She added that since the conditions were not followed, an environment impact assessment is being carried out to determine any adverse effects caused to the beach which will be followed by an enforcement as the work had not been monitored.

She said that the barge has since moved to its base and is out of sight.

Ms Servina noted that barging activities to construction sites are not a new concept or unique to the project as it had been approved and done in the past during the construction of the Savoy Resort and Spa, Beau Vallon and also on the outer islands.

She said that road safety is among the main reasons for allowing barging activities to take place in relation to construction, especially with regard to transporting heavy construction materials and heavy equipment for long periods on the roads.

Myron Meme, the director for environmental assessment and permit in the department of environment said that instead of the contractor alerting the district authority including other people in the community on the barging activity, as set in the conditions, only the Seychelles Maritime Safety Authority (SMSA) was alerted by the contractor on the activity to which clearance was given for the barge to enter the bay at Anse à la Mouche.

“This is why we insist that before the department of environment gives the final approval, we should have received confirmation that the public have been made aware of the activity to take place,” he said.

He also clarified that barging activities on the beach was not part of the approved component of the Environment Impact Assessment (EIA) for the project and was why it had to make its request through TCPA. He stated that the beach has been restored to its original and natural state.

The director for waste enforcement and permit, Nanette Laure, said the department is very disappointed with the action taken by the contractor. She further said that possible action could be taken against them for breach of conditions which could include an enforcement notice or stop notice on work on the site.

She added that the department does consider requests for barging activities on the beach very seriously as it relates to a sensitive environment.

Ms Servina said that SMSA did publish a public notice in the Seychelles NATION newspaper on an exercise which was to be held on June 19, 2021 and which never took place, rather than alerting the public on the activity.

She noted that while they understood that certain adjustments do take place during construction, such adjustments should be brought to the attention of the authorities for approval.

She noted the project has been approved and the authorities will work to ensure that it is completed in the time frame.