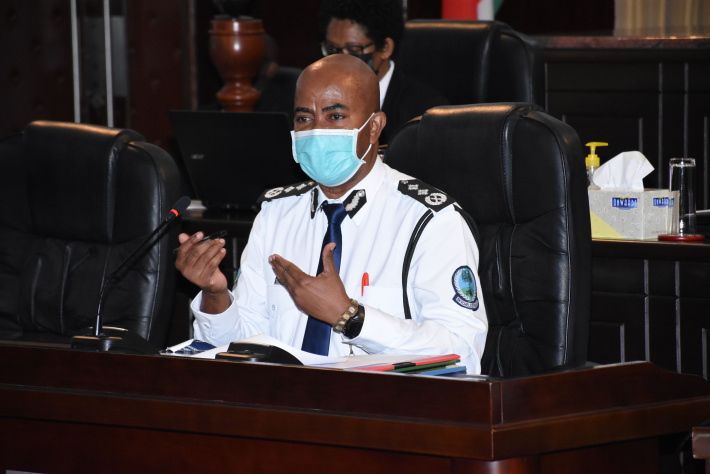 Following a long morning session of questions and answers yesterday, the National Assembly voted in favour to confirm Ted Barbé in the post of Commissioner of Police.

It was Honourable Bernard George, leader of government business, who brought the motion which set out asking the National Assembly to approve Mr Barbé’s proposed appointment made by President Wavel Ramkalawan.

Both Mr Barbé and Mr Labonté originally hail from Praslin, meaning that two Praslinois have consecutively held the post of Commissioner of Police.

The new head of the Seychelles Police Force appeared before the National Assembly yesterday where he provided an overview of his background and his qualifications, as well as to answer questions from the MNAs.

Mr Barbé also laid out his plan for policing to the National Assembly, detailing what he hopes to achieve during his tenure as Commissioner of Police.

Not wanting to reinvent the wheel but rather make the most use of present resources, Mr Barbé’s target for the Seychelles police force is to ensure that it becomes more proactive than reactive.

Also to boost the efficacy of the police force, Mr Barbé touted the use of more technology and training of police officers.

In regards to corruption and abuse of power among the force, Mr Barbé remarked: “Corruption exists in the police force, I will not say otherwise ‒ there are officers who are tempted to act in an unethical manner, but rest assured that we have mechanisms to deal with these types of situations and we will come out stronger. There are officers who have been terminated and others who are currently interdicted from duty while their cases are pending. We do not tolerate corruption and we have an internal affairs bureau which people can come to whenever they believe officers have not acted accordingly.”

Mr Barbé undertook his primary and secondary education on Praslin followed by two years at the National Youth Service (NYS) and another three years at the Polytechnic’s School of Art and Design where he pursued a course in art and design.

With his eyes set on becoming a teacher, Mr Barbé had then undertaken educational studies and a teaching programme at the University of Sussex.

Mr Barbé also holds a Master’s degree in criminology and criminal justice from the University of Portsmouth which he gained after joining the Seychelles Police Force.

“I taught at NYS and at Plaisance secondary but I developed an interest to join the police force [...] In June 1997. I decided to quit Plaisance school and join the force as a cadet. I was attached with the criminal investigation division at first and then I followed a 16-month long training at the police academy,” Mr Barbé told the National Assembly.

Mr Barbé rejoined the criminal investigation division (CID) as a sub-inspector ‒ where he spent the majority of his tenure in the police force ‒ and he also was an instructor at the police academy.

He also had spent some time working in the criminal intelligence unit, head of visible policing and officer in charge of the inner islands before leaving the force to take up a lecturing post at The Guy Morel Institute.

Mr Barbé noted that he had also successfully headed the negotiations regarding the kidnapping of two Seychellois boats and crew members, and has experience in child protection and fraud among others.

His nomination was approved unanimously by the National Assembly and he will take his oath before President Ramkalawan this morning.