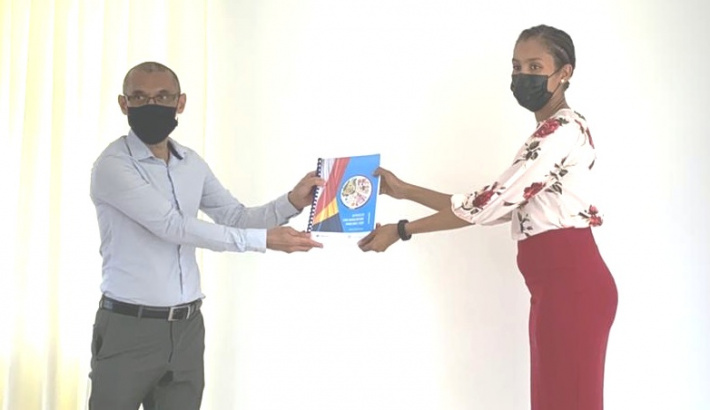 Dr Louange accepting a copy of the revised dietary guidelines

The document replaces the 2007 dietary guidelines and is aimed at educating the population on ways they can improve their daily eating habits and their health.

Yesterday’s virtual event saw the official handing over of the new dietary guidelines to the chief executive of the Health Care Agency, Dr Danny Louange.

Revisions to the guidelines kicked off in 2017 with the financial assistance of the Food and Agriculture Organisation (FAO).

A technical working group comprising professionals from the health, education, agriculture and fisheries sectors was set up to scrutinise the previous guidelines, review existing literature for emerging evidence in the field and review current guidelines from other countries globally.

In 2019, FAO provided technical support for the project and two experts provided their technical inputs to amend and finalise the guidelines which had been drafted.

“It was important to update the guidelines which was created 13 years ago to reflect the changes nationally in terms of people’s food eating patterns and behaviour, the availability and access to imported ultra-processed foods as compared to local foods as well as changes in eating patterns of families (take-away versus home-cooked meals), changes in transportation and access to electronic devices,” explained principal nutritionist, Stephanie Desnousse.

The new guidelines target the general population above 5 years but also have separate guidelines for children aged 0 to 5 years as well as for pregnant and lactating women.

“We felt that this was important as there is a need for further education in those critical life stages in ensuring that young children get the best start in life,” added Ms Desnousse.

The guidelines promotes the importance of eating varied, nutrient-based local foods such as tubers, fruits and vegetables to better tackle the high prevalence of obesity and chronic diseases.

The number of people considered either as overweight or obese continues to rise, according to the nutrition unit.

Changes to the 2020 Seychelles food guidelines include alterations to the names of key food groups:

The document provides details on nutritional values of food per 100 grammes, nutrient intake goals for different ranges in the population, meal ideas, information for breastfeeding and examples of food from each food groups.

There are a total of 10 messages for the general population above 5 years old which includes eating beans, lentils to stay healthy, eating a variety of fruits and vegetables, choosing whole grains and tubers instead of rice for a healthy heart, reducing intake of foods high in salt and sugar, and undertaking daily physical activities for a healthy body and mind.

Meanwhile there are eight messages targeting infants and young children, 0 to 5 years old and another 11 messages specifically for pregnant and lactating women.

Faced with some financial constraints, the nutrition unit is making digital copies of the new guidelines available on the Ministry of Health’s website but the unit will be able to make printed copies once it receives FAO funding later this year. 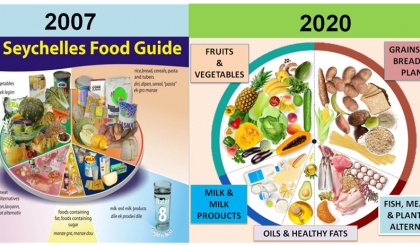