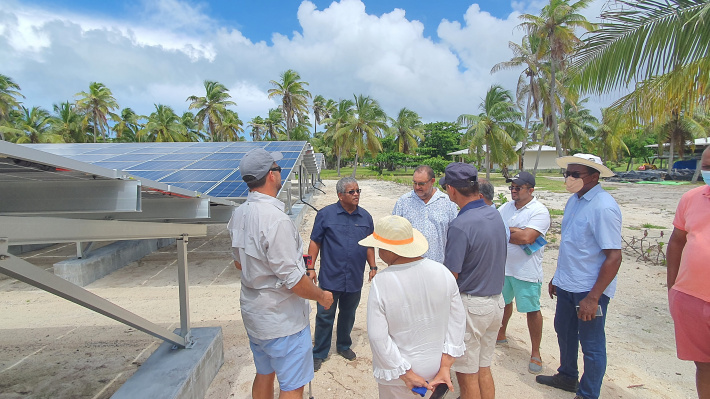 During his weekend tour of some outer islands, President Wavel Ramkalawan and his delegation stopped at Astove and Farquhar to officially launch new solar farms on these two islands.

Present for the two inauguration ceremonies was the First Lady, Linda Ramkalawan; Vice-President Ahmed Afif; the Minister for Foreign Affairs and Tourism, Sylvestre Radegonde; the Minister for Agriculture, Climate Change and Environment, Flavien Joubert; the Minister for Finance, Economic Planning and Trade, Naadir Hassan; the chairperson of the board of IDC, Patrick Berlouis; the chief executive of the Islands Development Company (IDC), Glenny Savy and his deputy Christian Lionnet; member of the IDC board Denis Matatiken and members of the diplomatic corps based on Mahé.

The solar farm project is an initiative of IDC as a source of alternative energy to cut costs and reduce the amount of fuel used to power electricity generators on the islands. The project will also help to protect the environment from pollution.

Work on the two sets of solar farms started in October last year and was completed this month.

“After the success of the company’s first foray into solar energy on Alphonse, we started the process of expansion which consisted on installing green energy on other islands which included Astove, Farquhar and Desroches,” said Mr Berlouis.

He added that after two years they can now testify that they are in the final stages of this project as the two solar farms on Farquhar and Astove are already up and running and work to install the third and much bigger one on Desroches is well underway,” Mr Berlouis noted.

The photovoltaic power station on Astove comprises 342 glass solar panels, capable of producing 150 KW of electricity, which will make up for 93% of the island’s consumption of electricity.

The one on Farquhar has 510 panels which gives an output of 250 KW of electricity. 94% of the island’s electricity needs will be produced by solar energy.

With the setting up of solar farms on two other islands, IDC will make further savings on fuel consumption and transportation of fuel to the islands. The money saved will go towards further infrastructure development on the islands.

The presidential delegation also stopped on Desroches to see ongoing work on the solar farm on that island.

The first solar setup on the outer islands on Alphonse was inaugurated in November 2018.

A much bigger solar farm under construction on Desroches will come online within the coming few months with a capacity of 2.5MW

During the launch ceremony Minister Joubert said that it is a good thing to see the emergence of green renewable energy on outer islands.

“Oftentimes when we talk about renewable energy the conversation has always centred around Mahé, Praslin and La Digue so it's good that we have this initiative on the outer islands and it’s good that IDC has incorporated 60 percent of renewable energy in their energy mix,” said the minister.

He also encouraged IDC to continue with this initiative on other outer islands so that we can bring down the total cost of energy in the country and also lessen our carbon footprint.

After visiting both solar farms, President Ramkalawan congratulated IDC for having completed such an important project.

“You have all the encouragement from the government and whatever you do on the outer islands that helps give Seychelles a green label will be most welcomed,” said the head of state.

He noted that the amount of land and ocean that Seychelles has committed to conservation and making the planet liveable is enormous.

“What IDC is doing as far as energy consumption on our island is concerned is a great contribution to the dream of having zero carbon footprint and we are planning to push that forward on the international platform and show that we are serious with conservation and climate change,” President Ramkalawan said.

The president then congratulated everyone involved in the solar farm project.

Speaking after the ceremony, IDC’s chief executive Glenny Savy noted that from now on they will no longer need to transport fuel from Mahé to the two islands.

“Another advantage that we will now have is that the pollution that was being caused by the electric machines will cease and the country as well as IDC will save money as we would no longer need to import fuel to supply Astove and Farquhar,” said Mr Savy.

To conclude their three-day visit to the outer islands, the Presidential delegation also made an overnight stop on Desroches. The delegates received a tour of the island where they had an opportunity to view the site of the solar farm under construction, visited the Island Conservation Seychelles (ICS) tortoise sanctuary, the IDC Village, farm, IDC guest houses and part of the North Point nature trail.

The solar project on Desroches is the third that IDC has conducted on its islands and by next year all islands that fall under its purview will run on solar energy.

The accompanying photos show some highlights of the inauguration ceremonies on Farquhar and Astove as well as a souvenir photograph with staff on Desroches. 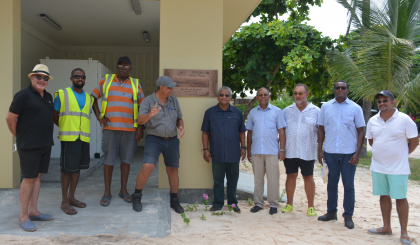 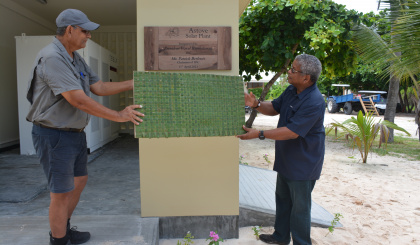