Will Aldabra be accessible to ordinary Seychellois in the not too distant future? |14 April 2021 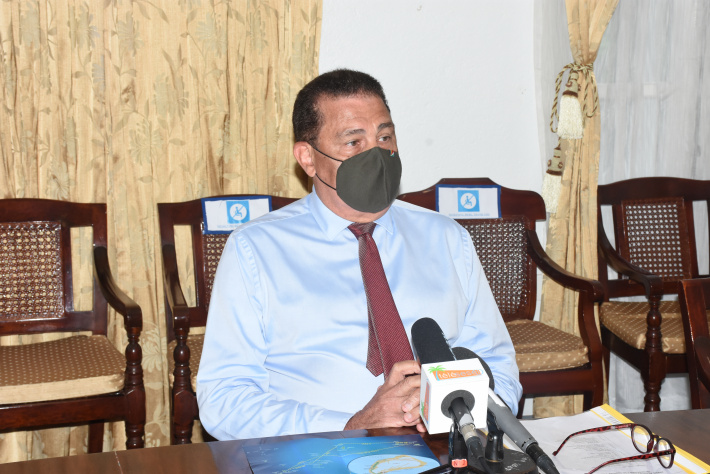 The possibility of opening Aldabra to locals so that they can learn and see the conservation work being done on the atoll was among the subjects of discussion during the presidential expedition to some outer islands over the weekend.

This was revealed by the Minister for Foreign Affairs & Tourism, Sylvestre Radegonde, who was also part of the delegation who made the four-day trip.

Minister Radegonde was giving the press a rundown on the trip yesterday afternoon at his office at Maison Queau de Quinssy.

President Wavel Ramkalawan, accompanied by members of the Seychelles diplomatic community, spent the weekend exploring the Aldabra atoll, Astove, Assumption, Desroches and Farquhar. Besides Minister Radegonde, other members of the delegation included First Lady Linda Ramkalawan and the Minister for Agriculture, Climate Change and Environment Flavien Joubert. The delegation was later joined by Vice-President Ahmed Afif and the Minister for Finance, Economic Planning & Trade, Naadir Hassan.

In his interview with the press yesterday, Minister Radegonde recalled that the main reason behind the visit was to honour an invitation extended by the president to the diplomatic corps shortly after he assumed office. It was a thank you gesture from the government for their help and support throughout the years.

He added that another objective of the visit was to show the diplomats what Seychelles is all about so that they can better appreciate the challenges we have.

This in turn will help them to become better spokespersons for Seychelles to their government as well as on the international scene.

“I am convinced that the diplomatic corps will fight for the interest of Seychelles,” said Minister Radegonde.

He further noted that after the visit the diplomats were much happier as they are now better equipped to be our representative on issues such as maritime security, climate change and its effects.

The delegation left on Friday and they returned Monday evening after visiting Assumption and Adabra first, then going to Astove and Farquhar for the inauguration of the new solar farm. The trip ended on Desroches where the delegation was able to see how an outer island can integrate tourism and agriculture into its development.

Minister Radegonde added that on their expedition they have identified islands such as Assumption that can be developed to accommodate tourists as it is in close proximity with Aldabra. He noted that Assumption can act as a staging post where a hotel could be built that will accommodate tourists before they travel to Aldabra and when they return.

Also discussed during the visit is the possibility of opening Aldabra to locals so that they can learn and see the conservation work being done on the island, Minister Radegonde said.

During the press conference the minister also refuted some rumours that have been circulating around, noting that all delegates who have accompanied them on the trip were named and no one else was on board.

As for the criticism over the cost of the trip, the minister said that IDC (Islands Development Company) covered the majority of the cost.

Minister Radegonde added to this by stating that President Ramkalawan is head of state for the whole of Seychelles including these islands, so it is important that he visits and learn about them.

“It is not the first time a head of state visits our outer islands as it had been done by President Ramkalawan’s predecessors, the only difference this time being that he brought members of the diplomatic corps with him,” Minister Radegonde said.

As for the state of the islands visited, Minister Radegonde congratulated IDC as well as the Seychelles Islands Foundation for their wonderful job on the upkeep of the islands that fall under their responsibility.