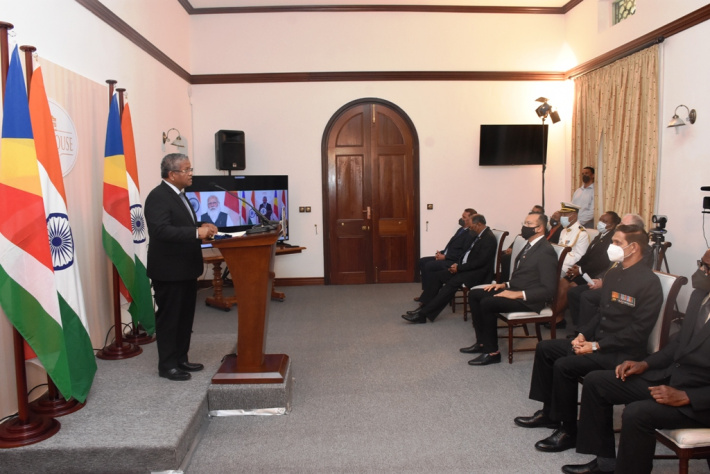 The President of Seychelles Wavel Ramkalawan and Indian Prime Minister Narendra Modi yesterday virtually inaugurated and handed over numerous projects financed by the government of India.

The high-level virtual event is the first such e-ceremony held between an Indian head of government and a Seychellois head of state, whereby projects are unveiled remotely instead of on-site.

The fast patrol vessel recently acquired by the Seychelles People’s Defence Forces (SPDF), through a grant from the Indian government, was also officially handed over to Seychelles during the e-ceremony.

The e-plaques for all projects were jointly unveiled by President Ramkalawan at the State House and Prime Minister Modi, who was in New Delhi, India, through a simple click of a button by both sides.

The first project to be unveiled was the Magistrates Court which stands next to the Palais de Justice at Ile du Port and is equipped with modern facilities including eight court rooms and private chambers, separate holding cells, multi-purpose conference rooms, playroom facilities and even a gymnasium and recreational space on the top floor.

The foundation stone for the Magistrates Court was laid in September 2018 and constructed at a cost of US $3.5 million, a grant provided by the Indian government.

Despite Covid-19 restrictions, the Magistrates Court was completed in October 2020 and is now operational.

President Ramkalawan noted that the state-of-the-art building now provides for greater security and comfort in the daily operations of the Magistrates Court, allowing for a more conducive environment and greater efficiency for the administration of justice.

This was followed by the handover of the new fast patrol vessel PS Zoroaster to help the maritime arm of the SPDF, the Seychelles Coast Guard, in combating maritime crime and safeguard the country’s maritime frontiers.

As a trusted partner in safeguarding our shared ocean space, the Indian government granted the sum of US $16 million for the acquisition of the fast patrol vessel.

The patrol vessel Zoroaster can reach a maximum speed of 35 knots with an endurance of more than 1500 nautical miles and is designed for efficient multipurpose maritime operations such as patrolling, anti-smuggling, anti-poaching, and search and rescue.

It was recently escorted and delivered to Seychelles by the Indian navy and is the fourth vessel in the Seychelles Coast Guard fleet to be gifted by the government of India.

“The donation of the patrol vessel Zoroaster by the government of India comes at an opportune moment, reinforcing our efforts to combat and deter maritime crimes, with specific emphasis on counter-narcotic operations within the vast expense of our maritime zones,” stated President Ramkalawan.

“This state-of-the-art vessel represents a key element in achieving this objective, as well as enabling the Seychelles Coastguard to fulfil its principal mission of defending our territory, thus contributing to regional stability and security,” he added.

The High Commissioner of India, General Suhag, also physically handed over the crest of the patrol vessel to Minister Radegonde as a symbolic gesture.

In regards to the unveiling of the 10 completed high impact community development projects (HICDP), President Ramkalawan explained that these are the realisation of the memorandum of understanding between the Republic of Seychelles and the Republic of India regarding grant assistance for the implementation of small development projects through local bodies, education and vocational institutions.

A total of 29 projects were initiated in the first phase of the HICDP, of which 12 had already been handed over to the communities with another 10 delivered to the people of Seychelles in yesterday’s e-ceremony.

The final item in the series of projects to be inaugurated in the ceremony was the one Megawatt solar power plant located on Ile de Romainville, again provided through grant assistance.

The project is yet another positive step taken by India and Seychelles to promote the use of clean energy for a sustainable future and forms part of the larger democratisation solar photovoltaic (PV) plan for Seychelles.

With this new solar plant, Seychelles finds itself a few steps closer to its objective of attaining 100% Clean and Green Energy by the year 2050.

According to President Ramkalawan, the solar plant is expected to produce enough electricity per year to meet the consumptions of about 400 households.

In his concluding remarks, President Ramkalawan highlighted that Seychelles has a reliable and trusted partner in India and Seychelles stands by India in the same way India stands by Seychelles.

“In a little less than two months, we shall be commemorating the 45th anniversary of the formal establishment of diplomatic relations between Seychelles and India. Indeed, the support we have received from India since the establishment of our diplomatic relations has contributed immensely to the socio-economic development of Seychelles in all its aspects,” noted the president.

“I wish to ensure President Ramkalawan that India will continue to strengthen Seychelles in its efforts for post-Covid recovery. India-Seychelles friendship is truly special and India takes immense pride in this relationship,” said Prime Minister Modi.

On the conclusion of the event, Minister Radegonde noted that the first e-ceremony was a successful first experience and noted that a lot of work and logistics went into the ceremony.

“Covid-19 has shown us a lot, and one of these is that there are events that can be conducted without meeting the person face to face, which reduces the expenses and health risk. We will have to find a sound balance between physical interactions and remote meetings,” added Minister Radegonde.

India and Seychelles’s bilateral relationship dates back to 1976 when Seychelles gained its independence but our intertwined history dates even further back.

The accompanying photographs show some highlights of the e-ceremony yesterday. 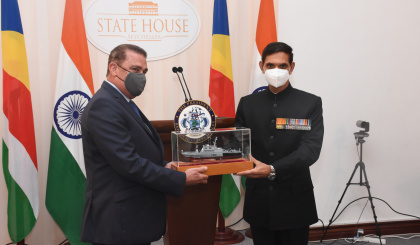 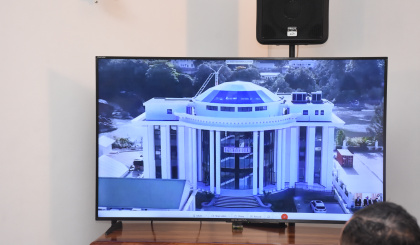 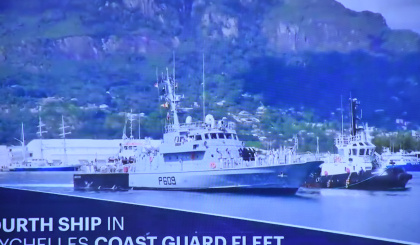 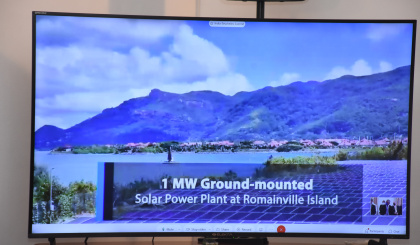