Following a Platinum Covid-19 committee yesterday morning, Public Health Commissioner Jude Gedeon has announced the easing and lifting of certain restrictions and orders in place against the propagation of the virus, which are to take effect on Monday April 12.

Speaking at the weekly Covid-19 press update yesterday afternoon at the Sheikh Khalifa diagnostic centre, Dr Gedeon noted that the revision follows intense discussions with relevant authorities, and can be justified by the fact that the vaccine coverage is relatively high and improving, the gradual drop in the number of serious Covid-19 cases being admitted to treatment facilities, most cases having very mild or no symptoms, coupled with the need for return for businesses towards the recovery of the domestic economy.

As per the amendments being drafted by the Office of the Attorney General to the Public Health Order, are to allow for grocery retailers to close at 8pm as opposed to 6pm. All stores are advised to apply to the Public Health Authority (PHA) for approval to open for operations by April 15.

Cinemas, casinos and standalone bars which were closed will now be permitted to open, provided they have submitted their standards of operation (SOPs) and received approval.

With the amendments, the prohibition on household mixing visits is being eased to permit mixing visits between family members, although Dr Gedeon advises that caution is exercised to ensure the protection of vulnerable or unvaccinated family members.

Family members can now also hold small gatherings on the beach, or areas adjacent to the beach on condition that the number of adults does not exceed 10. Beach parties are still prohibited.

With regards to funerals, for which the limit is presently 15 attendees, SOPs are being finalised to allow for more attendees. Weddings services and regular religious services will also be permitted with strict adherence to SOPs.

Furthermore, public meetings such as general meetings, graduation meetings and other ceremonies, receptions, wedding receptions and parties and seated indoors public shows are permitted, but conditions and SOPs for specific locations need to be observed strictly. Standing public gatherings, processions, outdoor rallies and festivals are still off limits.

Monday will also see the reopening of sports activities, with the lifting of prohibitions on team sports and training sessions, sports competitions, sports events both with and without spectators. Use of outdoor gyms will also be permitted in line with SOPS, public health guidelines and hygiene guidelines.

The restriction on movement order remains however, between the hours of 11pm to 4am.

“It is really important that the public assumes their personal responsibility. A lot of activities in the country will now be allowed with very few restrictions remaining. Businesses and organisations also need to take their responsibility. Going forward we would like to see a functioning society without having to go back to the restrictions that were in place,” Dr Gedeon asserted.

Since the first case was recorded just over a year ago, the ministry had up until April 7, recorded a total of 4,395 cases, out of which 93 percent, 4,090 persons have recovered. The death rate stands at 0.6 percent ‒ 25 deaths have been recorded since the outbreak started. The 25th casualty is a 43-year-old male who died on March 30, 2021.

And since the last update of April 7, 2021, the Ministry of Health detected 35 new Covid-19 cases, while five cases yesterday met discharge criteria and have been released from isolation.

“Looking at the trend, it is remarkable to say that since the end of March and the start of April, the downwards trend has continued. The weekly positive cases are also going down since the end of March. Attack rate gives you the number of cases per 10,000 people of the population. Since the start of the year, there has been an increase in attack rate, and since the mid to end of March, we have registered a plateau and since then it has started to go down. This is quite an important indicator as it is following the same trend as what was happening in the United Arab Emirates (UAE) and Israel ‒ as their vaccination campaign accelerated. We expect that in the coming weeks, mainly among our local population we expect that the attack rate will continue to go down. This also depends on how we respect measures that are in place,” Dr Gedeon noted.

Of the nine patients in the Family Hospital, three are receiving treatment in the intensive care unit (ICU), with one in critical condition on ventilation and getting medication to help with heart function. The other two are in severe conditions, but are recovering according to the chief executive of the Health Care Agency, Dr Danny Louange. A further six are on the general ward all of whom were admitted on Wednesday.

A total of 73 persons who tested positive were at Avani Resort, nine at the Berjaya Beau Vallon Bay facility, 13 at the Praslin Pension Fund facility, and eight patients at the Indian Ocean Lodge, Praslin.

“We are now targeting two large groups and these are seafarers and new GOP holders. Today a vaccination programme has started among seafarers and we are expected that this will go on for the next coming days. These seafarers are working in Seychelles for a long period of time and they go back and forth to sea. It is to our advantage that they get vaccinated during the time that they are working in Seychelles,” Dr Gedeon added.

Asides from announcing the easing of restrictions, the ministry also unveiled the newly approved ‘Contak’ mobile application, developed locally by Space-95 in partnership with the department of information communication technology (DICT) and Seychelles Chamber of Commerce and Industry (SCCI) to facilitate contact-tracing activities for the ministry.

The QR-code based app can be downloaded by both individuals and entities and is a secure way to store information about persons with whom an individual has close contact, and places visited for contact-tracing purposes, if necessary. After downloading the application, entities or individuals simply register, and individuals use the app to scan the QR code displayed at registered entities, to save a log to the diary on the application. If ever the individual tests positive, the diary is consulted, making the contact-tracing process much easier for the contact-tracers. 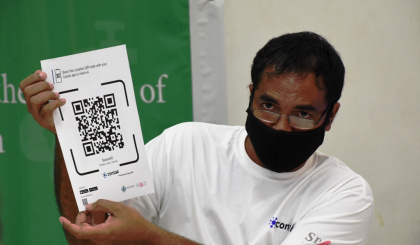