Hundreds show up for second dose of Covishield |23 March 2021 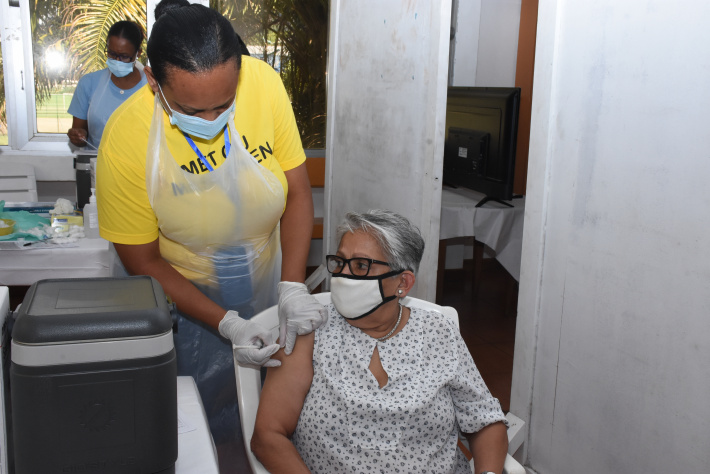 Hundreds of people aged over 60 who received the first dose of the Covishield vaccine against the Covid-19 virus on January 26, yesterday received their second dose at one of the five vaccine distribution centres across the country.

The distribution, part of the national immunisation campaign launched earlier this year as an accelerated measure against the propagation of the virus, commenced early morning as scheduled, and saw a steady stream of people throughout the day, mainly pensioners, who waited eight weeks between the doses, upon the decision of the Ministry of Health on account that the vaccine is more effective if the booster shot is administered during the eight week timeframe.

The five centres in operation for the vaccination drive yesterday included the ICCS who catered for all persons aged over 60 residing in the Anse Etoile district, while the Mont Fleuri district community centre was catering for the same target group, in addition to health workers and government officials.

Team leader of the Mont Fleuri distribution centre, Amelie Richard, was by yesterday afternoon satisfied with turnout, and the cooperation from the public.

“We are expecting to administer around 200 doses today (yesterday) and overall we are satisfied with turnout, and the public have been very cooperative thus far. Just this morning alone, we administered over 100 jabs, that is between 8am to 12pm so I think we can reach around 200 by the end of the day,” she said.

“The process for the second dose does not differ from the first dose, except for the fact that the observation period after having been administered the shot is 15 minutes and not 30 minutes as was the case with the first dose,” Ms Richmond explained.

As was the case with the first dose, upon arriving at the centre, people have to undergo screening, and are required to produce identification documents, as well as the slip issued by the Ministry of Health upon receiving the first dose before proceeding to the vaccination section, on condition that they have no symptoms of the virus and have not had contact with persons who have tested positive over the past 14 days. After receiving the jab, they are kept under observation for 15 minutes, in case of any serious side effects.

In instances that persons have misplaced the slip certifying that they received the first dose, the centre has no other option but to consult the central database to verify and cross-check against the persons’ identification document the exact date on which they received the first dose, before proceeding to administer the second jab. According to a representative of the ministry, this can be problematic considering the large amount of data being collected by the ministry on a daily basis, and the fact that not all of the information has been recorded on the database as of yet, making it difficult to trace information for individuals who are unsure about the exact date they received the jab.

Asides from persons who have misplaced the slip, others are turning up to centres weeks ahead of their second dose due date, and most are understanding and compliant when informed of the actual date.

The campaign is scheduled to go on throughout the week and coming weeks, until all persons, of the 28,917 (Ministry of Health figures from Friday March 12) who received the first dose of Covishield receive their second dose.

An additional vaccination site will be operational today, namely, the Grand Anse Praslin health centre for persons hailing from the same district, ICCS Victoria for over 60s residing at Mont Buxton, the Mont Fleuri community centre for persons of 60 plus hailing from Pointe Larue who received the first dose either at ICCS or the Green Roof, and the Anse Royal DA office for persons from the same district. The Beau Vallon DA office will today cater to over 60s from Glacis, while persons from Port Glaud will receive the jabs from the Grand Anse Mahé DA office.

All sites are scheduled to open on Thursday with the exception of the Grand Anse Praslin Health Centre, which is set to reopen on Friday March 26, to cater for persons from both Grand Anse and Baie St Anne Praslin.

This leg of the vaccination drive is for all persons above 60 years who were vaccinated with Covishield between January 26 to 31, and were given an appointment between February 23 and March 3 for the second dose.