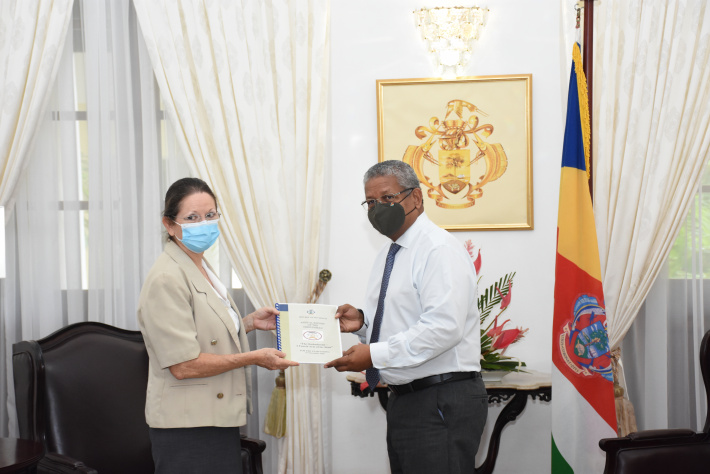 President Wavel Ramkalawan has received a copy of the Ombudsman’s report for 2020.

It was Ombudsman Nichole Tirant-Ghérardi who handed President Ramkalawan a copy of the fifty-four page document in a ceremony yesterday morning at State House.

After the presentation, the two held discussion on the report’s content relating to various aspects and recommendations, including understaffing, which Mrs Tirant-Ghérardi claimed is one of her main concerns.

Speaking to the press following her meeting with President Ramkalawan, Mrs Tirant-Ghérardi said that like in previous years the report is a summary of the various activities carried out by her office and the different challenges faced which include the successful and unsuccessful collaborations with different ministries and other public authorities.

She stated that most of the recommendations from the 2018-2019 report appears again in the report as most have not been taken into consideration and therefore have not been addressed by the different ministries.

She noted that out of 166 complaints received by her office in 2020, only 27 cases (16%) fell within its mandate and were retained to be addressed while some other cases were considered premature, outside remit, reserved for mediation or had to be redirected to the appropriate organisations such as the Human Rights Commission and the Anti-Corruption Commission, among others, for action.

Mrs Tirant-Ghérardi said that like she reported in her last report, the lack of responses and cooperation from certain ministries and some other public authorities is still a great cause for concern for her office.

“You take time to work on your report, make recommendations, send it to them for action and inputs through our questions that they have to answer only to be told later that they have been advised by their legal advisor to reject our report. It is very frustrating,” Mrs Tirant-Ghérardi stated.

She claimed that the different administrations should relook at their services they provide to the public which will therefore also allow the complainant to bring and to seek redress to their complaints of maladministration there (their administrations) rather than to go elsewhere for help.

Mrs Tirant-Ghérardi also said that President Ramkalawan has offered his full support to the Office of the Ombudsman.

She stated that as an independent body, the Ombudsman focuses on service delivery at the administrative level – offering an independent and alternative dispute resolution system that works outside the legal system and outside the political arena to keep maladministration in check and improve the services delivered by public officers running the state’s daily show.

With a total of 136 complaints out of the 166 registered complaints being either ‘premature’ (71) or ‘outside remit’ (65) of the Office, Mrs Tirant-Ghérardi said that the focus will be on developing a specialised education and awareness programme to fully sensitise and educate the general public on the Ombudsman’s mandate and work as it seems that the public remain largely ignorant or unclear of the office’s role and mandate. 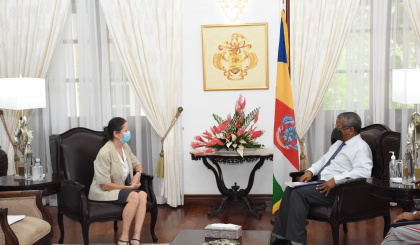 President Ramkalawan and Mrs Tirant-Ghérardi in discussion after the handover of the report (Photo: Thomas Meriton)