Businessmen give their take on new GOP measures |15 February 2021 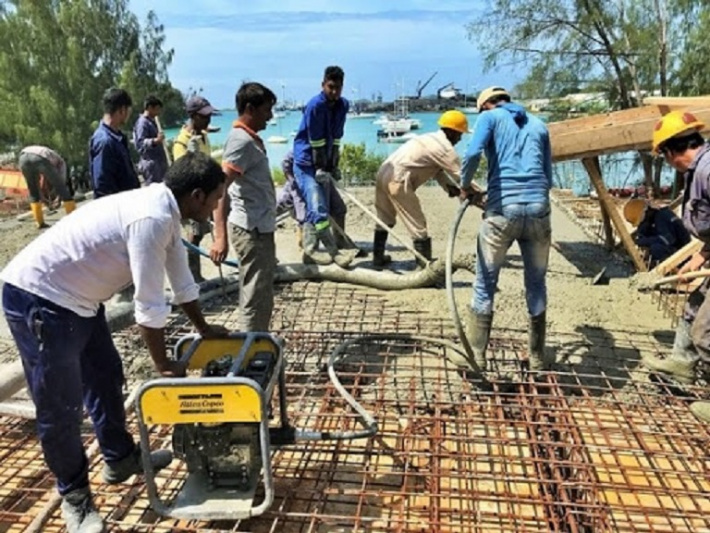 A group of foreign workers at work

In his State-of-the-nation address (Sona), President Wavel Ramkalwan spoke about a revised Gainful Occupation Permit (GOP) framework which is now in place in an attempt to allow more employment opportunities for locals.

“It is important to firstly look at if there are no Seychellois in any workplace who can do the available tasks, since there are many job opportunities locally. At the same time, Seychellois should change their mindset about working. At present there are too many foreigners working in Seychelles and the number has a direct impact on the economy as these foreigners are paid in foreign currency which is being taken away from the country,” President Ramkalawan said.

A GOP allows the holder to be gainfully occupied in Seychelles and this could be as an employee or as a self‐employed person. The new framework is a renewed version of the temporary one introduced in June last year to allow businesses to plan and re-adapt to the current economic situation being faced by our country and for the government to ensure that priority of employment remains for Seychellois.

Following the expiration of its timeline in December last year, a revision process was carried out in line with the country’s economic situation, in relation to the labour market.

The debate is on again and businessmen feel that more consultation needs to be done regarding this matter. In Seychelles, in every sphere of life, you will find expatriates. Right now some businessmen who heavily rely on these foreigners find themselves in a dilemma. Seychelles NATION asked some of their opinions and here is what they have to say:

The revised GOP rules will not have a positive effect on our economy nor on the creation of jobs for Seychellois. It will simply create a situation of a stalled economy, leading to a significant decline in business economic activity, business failures and a decline in available jobs for Seychellois. This will then undermine our whole country. The solution is not to blame and remove foreign workers; the solution is to find the right balance through a system of guaranteed GOP quotas in each business sector, creating maximum opportunities for Seychellois and then if required, a discretionary process for GOP approval above the quota. Combine this with less intensive work rotas for Seychellois in tourism and related business sectors and the maximum job opportunities for all Seychellois can be achieved.

Are the policies encouraging businesses or destroying them? Who will create employment and pay taxes without business?

Roy : No, we cannot operate without GOP. Some Seychellois workers do not understand the concept of a business as a separate legal entity. Therefore they lack vision and see only their salaries at the end of the month. Right now with the half-day work they become lazier. They don’t push to the max. Like in my case my workers create very little at home. They cannot see how they can help me with my business. We need a positive work culture because it is more productive.

Anna: I have three Seychellois and six expats. Seychellois in general don’t want to work and need to be skilled. It’s difficult to change the mindset. Seychelles will come to a standstill without expats. I understand the decision regarding foreign exchange leaving the country. Seychellois need to go hungry in order to understand work ethics.

Savita: Of course we cannot operate without GOP. I think they need to allow us 50:50. Because when the Seychellois child is sick or she is sick or need to attend funeral, has stomach pain, etc etc, that GOP holder is there to cover up. But if we have 100% Seselwa who will cover up? We are stress-free as business owners when we employ GOP holders as they do work and deliver. They rarely get sick and almost never go to the doctor. They are in Seychelles for a reason and this is for work so they give all their energy and they are loyal, punctual and efficient.

For example, the President is telling graduates to join teaching and that will get rid of GOP holders. When things get better those graduates will not stay in teaching. Are we going to see all the schools without teachers until we have a replacement? This is something we need to think about deeply and not find a temporary fix! Employment has always sided with employee. What measures they have in place to guarantee that the Seselwa will stay in the job? We are going to be left with our business crippled with no option but to close down.

Anonymous: The current situation calls for localisation as a lot of our citizens are out of a job. The question that we need to ask ourselves is how many of these people are willing to take up an employment not merely to earn a salary but to give their best at work? How many of these people will make themselves an asset to the organisation they join? How many will want to go the extra mile? How many will take up responsibilities and deliver what is expected and beyond? May be just a handful.

As an employer the issues I face are as follows:

1. Staff not taking 100% responsibility for the portfolio of job offered to them.

2. Staff always waiting to be told as to what is expected of them rather than being proactive. Even after 10 years of being in the same trade, I still have my senior staff who just don’t take up as much responsibility as I would like them to. But, I can’t let go of them because I know that I won’t get any better.

3. Staff having a feeling of entitlement towards government relief schemes, health, and education. Which is not the case in many countries. Everything is free and hence bear no value. It’s this attitude of carelessness and arrogance that they carry to their workplaces too.

4. Easy availability of alternate employment, if they screw up in one place, they know that they will find another job that will pay their bills and put food on the table. This attitude of ‘day to day living’ and the lack of aspiration to grow in life and become an example to themselves and their families is very dangerous. They will always look into day wages and easy pay.

5. The growing mentality that expats have taken all our opportunities and we have nothing has to stop. Expats were brought in to fill the gap, not to take away the bread and butter of the citizens.

6. After several years of running a business in this country, I have altered my way of conducting business to have mental peace and maintain sanity. I have very clearly understood that nobody wants to work beyond 4 o’clock and that expecting them to even put in 30 minutes extra work is like asking them to do the impossible. Not one person out of the 15 odd locals will come to say... “I will finish this before I go home tonight”. It’s always “It’s getting late, I have to go”. This is ground reality.

7. Yes, there are organisations that have taken the entire GOP process for granted, misused and abused the same. But, the government department that deals with GOPs has all the data of each and every organisation. They should be able to pinpoint who is genuine and who is not. A blanket approach cannot be used.

8. Let’s not forget that GOP holders pay income tax which is a revenue stream for the government.

What can be done to better manage the situation:

1. Analyse GOP requests on a case by case basis.

3. Link GOP to VAT payments, business tax payments, why would a business that is not performing enough to pay taxes require GOP?

4. Ensure mindset of our people is changed right from school.

5. Let’s not stop education at S5 level, let’s encourage our youth to dream big, have aspirations and take the country forward.

6. The human resource dynamics are changing rapidly with the availability of several post-secondary training courses, UniSey courses, The Guy Morel Institute courses. Let’s follow through and ensure that all children have at least one college degree or diploma. This will certainly help them put themselves at a higher pedestal and realise their self-worth.

All of this is possible and can be done given the size of our population. But, let’s also understand that this is work in progress. Trying to completely destabilise businesses will only lead to frustration, anger and loss of more jobs.