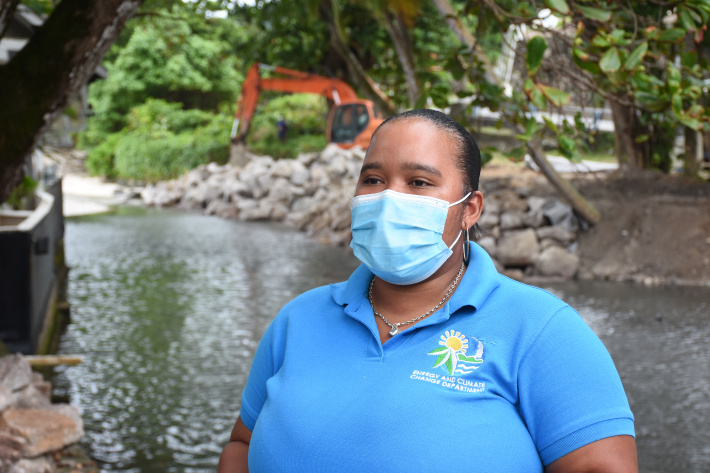 The climate change division under the Ministry of Agriculture, Climate Change and Environment has kicked off its coastal rehabilitation projects at the world-famous Beau Vallon beach.

With restriction in place and lack of tourists and beach goers, the division is going through its projects to protect the coastline of Beau Vallon which are expected to be completed in four to six months’ time.

These projects have been split in three phases, of which the third phase has already broke ground at the marsh opposite the Baobab pizzeria.

Phase one will include the continuation of the sea wall on Beau Vallon beach from the open gym near the Savoy hotel to La Plage restaurant.

Meanwhile, phase two is a sea wall from La Plage restaurant to the dive centre. The work has been contracted out to Benoiton Construction Company Limited (BCCL). The second phase of the project requires that the Seychelles Cable System Company secures the landing site of the underwater optical cable to ensure that the cable does not get damaged during construction and cut off the country’s internet access.

Phase three is to rock armour and line the river channel next to Baobab pizzeria, a project which started last week. Both phases one and three have been assigned to local contractor, UCPS (United Concrete Products Seychelles).

This coastal rehabilitation project will cost around R5 million and is being funded by the Environmental Trust Fund (ETF).

“Phase three of the projects is to just line the river outlet and the rock armouring will not reach the beach. We decided to start the third phase first because it is the easiest one among the three,” she explained.

She further noted that they are making use of rocks instead of a concrete wall to line the river to enable water to flow in and out of the river better.

The third phase is scheduled to be completed in the next two weeks.

As part of the first and second phases, Ms Simeon explained that a sea wall was already constructed ‒ from the Mahek restaurant up to the outdoor gym at the Bazar Labrin areas ‒ some 12 years ago. The sea wall is often used by beach goers as sitting area.

She noted that phases two and three are an extension of this sea wall.

“We have observed a degradation of the Beau Vallon beach during the north-west trade winds where tree roots are exposed and water reaches as high as the boardwalk where Bazar Labrin is held,” said Ms Simeon when explaining the raison d’être behind the project.

“The plan for the projects started over two years ago and it is only now that we have been able to implement it. As you know, Covid-19 has also delayed some projects but we have finally been able to start.”

The coastal rehabilitation programme forms part of an even greater national project, where golden mile promenade is expected to extend from Mahek Restaurant up to the Beach Shak bar.

According to Ms Simeon, this project involves various government departments and entities such as the Seychelles Land Transport Authority (SLTA) and the department of tourism, but she also added that it is unclear where the project stands at present with the Covid-19 situation.

“In the meantime, the climate change department continues to rehabilitate the area,” she concluded. 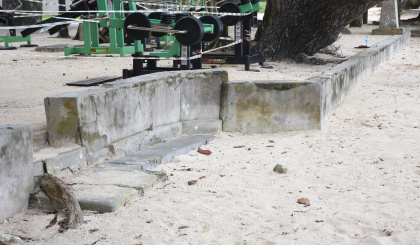 The existing sea wall from the Mahek restaurant up to the outdoor gym at the Bazar Labrin areas will be extended (Photo: Jude Morel) 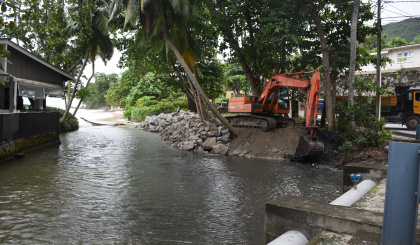 Work in progress to rock armour and line the river channel next to Baobab pizzeria (Photo: Jude Morel)