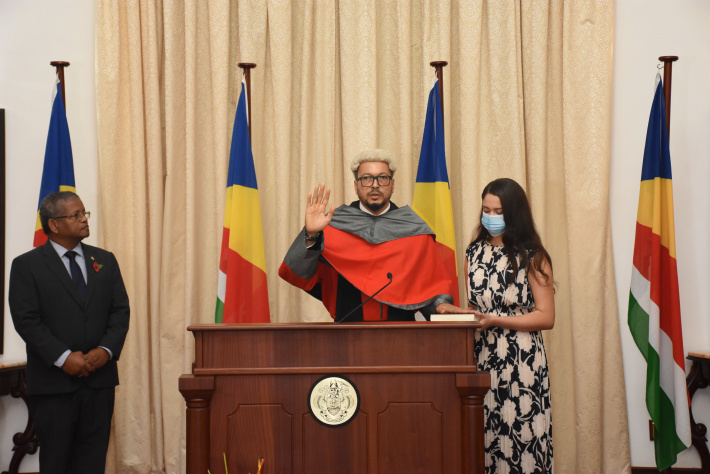 Justice Rony James Govinden has been appointed Chief Justice of the Supreme Court of Seychelles and he was sworn into office during a ceremony at State House yesterday morning.

Chief Justice (CJ) Govinden replaces CJ Mathilda Twomey who had been in the position for the last five years.

President Ramkalawan appointed Justice Govinden under Article 127 of the Constitution following recommendations made by the CAA.

Justice Govinden was elevated to Puisne Judge in March 2017. He has a Bachelor of Laws with Honours from the University of Mauritius and sat for his Bar at the Council of Legal Education Mauritius in 1997.

Congratulating new Chief Justice Govinden after he had taken his oaths, President Ramkalawan called on him to administer our judiciary with patience, love, compassion and great competence.

Highlighting that the responsibilities bestowed on him are indeed great, President Ramkalawan also noted that also great are the expectations of not only the people of Seychelles but also of all his fellow colleagues in the judiciary.

“You have been prepared for a long time and you have proved your worth and I believe that if the CAA chose you to be the chief justice they felt that at this moment in time you were the right candidate,” President Ramkalawan said.

He pointed out that as Mr Govinden took his oaths he is reminded that on this day Seychelles has experienced a complete change at the head of all the three branches of government, making it a completely new government indeed.

“I believe it is an opportunity for us to make this new start and for us to rise in order to give our people the very best. I believe in the midst of what our country is going through all three branches of government need to pull up their socks and really give their very best,” added President Ramkalawan.

President Ramkalawan went on to stress on the independence of the judiciary, something he has called on it members to practice while assuring them that the executive will in no way interfere with their work.

He has called on them to deal with all cases diligently without fear, favour and ensure that the rule of law applies to all citizens of this country and that no citizen is above the law.

“It is only when we respect the rule of law that we will be able to have a country where citizens live civilly and respect each other,” he added.

Access to justice is another issue that President Ramkalawan said needs to be addressed and some of its related procedures streamlined.

“Chief justice I am counting on you to bring about the necessary reforms so that our citizens will feel that access to justice will indeed be another way for them to feel that justice is being delivered because the longer it takes for justice to be applied, on many instances our citizens feel that they face injustice rather than justice,” the president emphasised.

President Ramkalawan continued by saying that in spite of all that has been said and done, complaints regarding delays in obtaining a final determination of cases pending before courts and tribunals are still rampant. He told CJ Govinden that he is counting on him to lead his team to ensure that justice is delivered in time.

“I believe it is your responsibility as the judiciary to help us fight the scourge which has been affecting our country for too long,” President Ramkalawan noted.

While the Constitution of Seychelles recognises judicial officials of both Seychellois and foreign nationals, President Ramkalawan has launched an appeal for more Seychellois to join the legal system.

He said many are showing the zeal, competency and knowledge which is definitely a good sign that our judiciary is growing in the right direction. But at the same time, President Ramkalawan has recognised that the work of the judiciary in particular the judges also depends on the quality of work done by the lawyers, an area which President Ramkalawan pointed out as having a number of issues that also need to be addressed. He has called on all lawyers to give their utmost in delivering justice.

President Ramkalawan thanked Judge Melchior Vidot who had been acting as chief justice before whom he took his oath of presidency.

For his part CJ Govinden said while he is aware of the weight of the great responsibility that now lie on his shoulders, he is comforted and encouraged by all the support he is getting and is therefore ready to take the task head on.

He said he is taking this promotion with a great sense of responsibility, all knowing that it will not be an easy task but one full of challenges.

“I will work in partnership and in close collaboration with other judges and other personnel of the Supreme Court to ensure that the judiciary uphold its Constitutional mandate,” CJ Govinden said.

Commenting on President Ramkalawan’s approval of his nomination, CJ Govinden has thanked the head of state for choosing him based on his qualifications and competency because he said otherwise the president could have asked the CAA for another candidate as his relationship with him is not a friendly one.

From 1998 to 2017, the two individuals faced each other through a series of lawsuits in which Mr Govinden represented the government in power in numerous capacities and he admitted that President Ramkalawan could have rejected his recommendation.

“But I realised that you saw in me somebody who has the qualification, competence, qualities and who is impartial to do the job,” CJ Govinden said while thanking President Ramkalawan.

He also expressed heartfelt gratitude to the chairperson of the CAA and its members for seeing him as the person who can competently and effectively discharge in the office of the Chief Justice and he has assured them all that he will carry out his function to the best of his abilities and in accordance with his oath of office ‒ without fear, favour, ill will or malice.

CJ Govinden said he is yet to come up with a more detailed plan as to how to move the judiciary forward but regarding the rule of law, he said the judiciary will ensure that nobody is above the law including judges themselves and that members of the judiciary should not be bound by political and personal affiliation, conflict of interest issues that will take away their impartiality.

In relation to justice and accountability, CJ Govinden said there is a need to revisit some of their fundamental principles to better promote the rule of law, the concept and substance of justice among others.

With regards to localisation in the judiciary, CJ Govinden said “Seychelles as a small country needs the services of non-Seychellois in certain positions but I believe that priority should be given as much as possible to Seychellois judges”.

He said law students should feel welcomed to join the legal system without any barrier if they have the necessary competence. 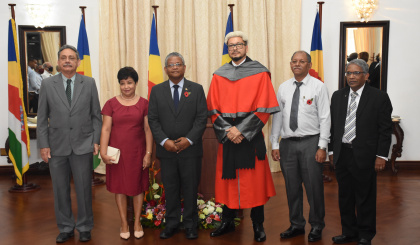 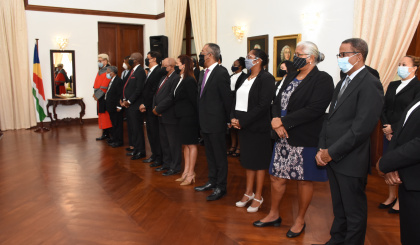 President Ramkalawan conveys message of condolence to the Russian Federation |13.05.2021