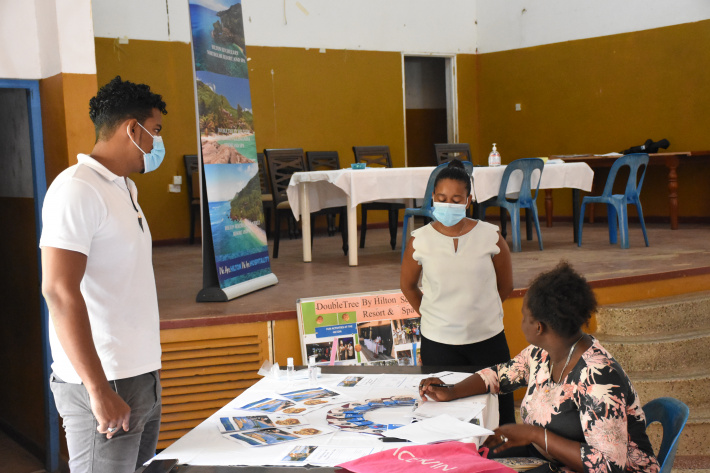 The Double Tree by Hilton Seychelles Allamanda Resort & Spa yesterday organised a recruitment fair in the hope of attracting people wishing to discover new career opportunities in the hospitality industry with the resort.

Human resource clerk, Kurtis Confait, said the resort is gearing up to welcome tourists coming in from other countries, on the health authorised list, following the checking out of a group of families from the United Arab Emirates who had been occupying the hotel for quite a while.

He noted that those recruited will replace the Seychellois workers who have resigned and also the overseas foreign workers whose gainful occupation permits (GOP) have been revoked due to health measures against the spread of the coronavirus (Covid-19).

He noted that as the resort is small, it is expected that only two candidates will be employed per each of the advertised vacancies.

Mr Confait said the fair was held at the community centre as they wanted to attract candidates in the region closer to the resort. The vacancies were advertised for three days in the Seychelles NATION newspaper starting from October 29, 2020.

Within the first 45 minutes of the opening of the fair, only five people had walked in to seek information or to fill vacancy forms.

Tahkeerah Jean from Takamaka, who was the fifth person to come out from the recruitment fair, said: “I didn’t find a job in my line of qualification but as I have a child to feed, I have to do something and I have chosen to be laundry attendant for the time being.”

She said that she is a mature student from the Seychelles Business Studies Academy (SBSA) and has studied for a diploma in office management.

Before taking a one year out from work to nurse her baby, she was a kid’s care attendant and activity coordinator at the Hilton Seychelles Labriz Resort and Spa, Silhouette Island. If she qualifies, it will be her fourth job since she started working.

Working as a handyman at the Anse Royale community centre under the Unemployment Relief Scheme (URS), Niel Youngman said he wanted a fixed job so that he could entertain his needs properly while he will also get his pension paid including his social security contributions.

He noted that the allowance he gets under the URS does not cater for the above mentioned and he wants a steady job where he can also move up the career ladder. He applied for the post of security officer but noted he will change if other job opportunities arise within the resort.

By 2.15pm in the afternoon, Mr Confait said they had to call it a day as for a long period of time nobody had shown up at the fair.

He noted that only 15 people showed up which to them was a great disappointment.

He said that the resort will carry on with its recruitment drive, through advertising, to fill in the vacant posts. 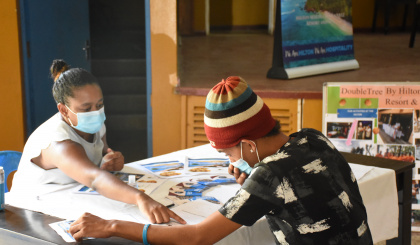