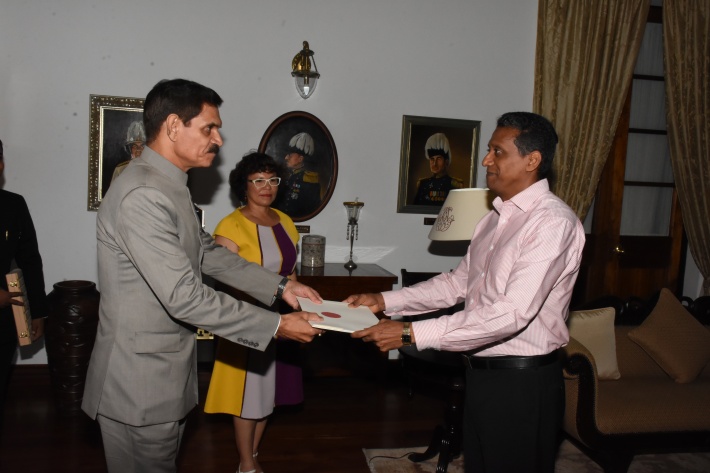 During the meeting, the President and High Commissioner Suhag discussed several areas of cooperation between the two nations including security, training and human resource development as well as the various ways in which to strengthen the relationship between the two countries.

Mr Suhag noted that he is honoured to be appointed as the high commissioner of India to Seychelles and that his appointment serves as a testimony to the importance India attaches to the relationship with Seychelles.

“I bring with me greetings from the people of India to the people of Seychelles. Our two countries have enjoyed a very special relationship which is based on mutual trust, enormous goodwill and shared values and these are certain issues that we have discussed as we have very strong people to people and cultural linkages,” High Commissioner Suhag noted.

Furthermore, High Commissioner Suhag stated that his priority during his tenure is to deepen the existing relationship between Seychelles and India and to realise the various projects that the Indian government is helping Seychelles with.

“There are a large number of projects there in the planning. Some are of national-level projects, the government house, police headquarters and the intelligence office. These are three national priority projects,” he said.

With regards to the construction of a military base on Assomption island, an issue which has been hotly debated both in the national media and the National Assembly, High Commissioner Suhag stated that the project is the initiative of the government of Seychelles and that India will provide help for the coastguard facility for local military forces, as announced by President Faure.

“This is for the people of Seychelles to improve the security and especially to fight and to prevent piracy, drug trafficking, human trafficking, and international terrorism. Whatever assistance is required by the government of Seychelles, our government will provide. It is for the development of the island and it remains so,” he said.

Asides from providing help to establish the coastguard base, High Commissioner Suhag remarked that the government of India feels privileged that the government of Seychelles has adopted the policy of India first for seeking any assistance towards maintaining peace, stability and security in the Indian Ocean. As has been the case in past years, the government of India will continue to provide opportunities for training and human resource development to enhance the capability of the Seychelles People’s Defence Forces by way of providing training, carrying out exercises and also providing the human resource expertise which is required. There will also be opportunities for training for elite police personnel under the Indian Technical and Economic Cooperation (Itec) programme with 90 slots available this year, as compared to 88 slots available in 2018.

Concluding his interview with the media, High Commissioner Suhag conveyed his nation’s pride for the existing cultural bonds between the two nations, stating that “we are proud of almost 10,000 Indian diaspora which is here and contributing immensely towards the economic growth as well as the social fabric of the nation”.