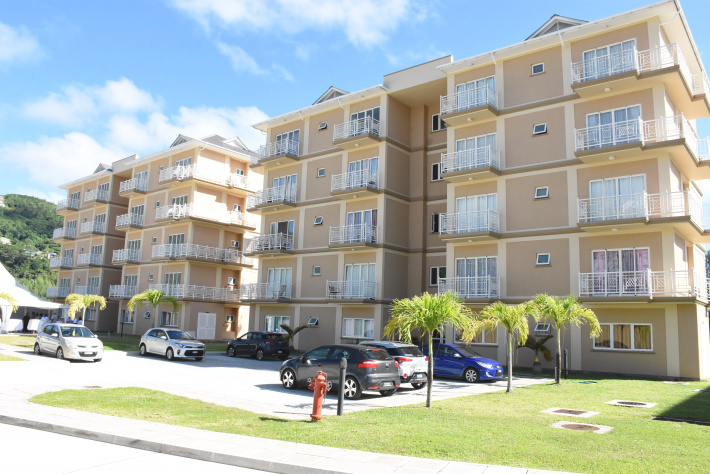 A partial view of the new condos (Photo: Joena Meme)

Green Tree Investment, a subsidiary of Green Island Construction Company (GICC), has opened the doors to its newly constructed ten unit condominium under the graduates and young professionals’ initiative.

The condominium project welcomed its first set of residents in 2018 and construction for the second three-bedroom block began in March last year.

The 10 three-bedroom apartments are furnished with built-in wardrobes, vanities for the bathrooms, kitchen cabinets, a cooker, washing machine and solar water heaters.

The construction cost of one unit was R2.5 million with GICC – a wholly owned subsidiary of the Islands Development Company (IDC) – selling a three-bedroom apartment to the graduates and young Seychellois professionals at 1.5 million.

The owners were presented with the keys to their homes during a ceremony held on site on Saturday morning in the presence of President Danny Faure; Minister for Habitat, Infrastructure and Land Transport, Pamela Charlette; the principal secretary for habitat Denis Barbe and the chief executive of Islands Development Company (IDC) Glenny Savy.

“Today is a very special day for the group of young Seychellois who are accomplishing their dream of moving into their own house. Our small village is slowly growing and in a few years from now we will form a new community,” said Mr Savy in his address to the new residents.

He stated that there is still a lot of work to be done as three bedroom units and four two-bedroom luxury units are still under construction, with the sale of the luxury apartments being used to subsidise the graduates block.

“I ask for the support and understanding of all residents as construction for the other units are still underway and they may cause some noise,” he said.

The idea for the condominium project was conceived as a way to give graduates and young professionals a chance to have their own home at an affordable price in an ideal location.

“One of the biggest accomplishments for a young family is owning their own home so I ask every resident to take good care of their investment. I also urge all of you to take care of your new neighbourhood,” said Mr Savy.

The CEO ended his address by thanking one of the key partners involved in the project which is the Ministry of Habitat, Infrastructure and Land Transport and stated that once the project is completed they will have given 100 families a house.

Once all the blocks are completed, the condominiums will be within a gated and secured estate with proper management of the common areas through a management corporation set up with all the buyers and the developer. Each unit will have one parking bay, while additional parking space will be available for visitors.

Jeanette Gertrude, one of the new residents, stated that she has been waiting for her home for the last twenty years but she is very happy to be finally moving in her new home with her family.

She added that it wasn’t an easy process and that she had to knock on a few doors but in end she is happy with what she got. She also encouraged everyone on the waiting list to continue making their monthly payments. 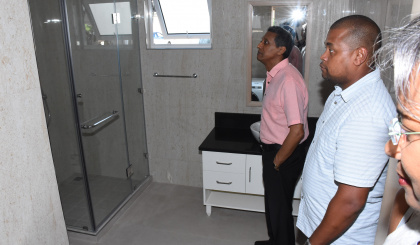 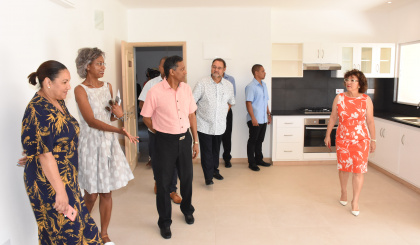 President Faure and his delegation viewing the facilities in the new apartments (Photo: Joena Meme)