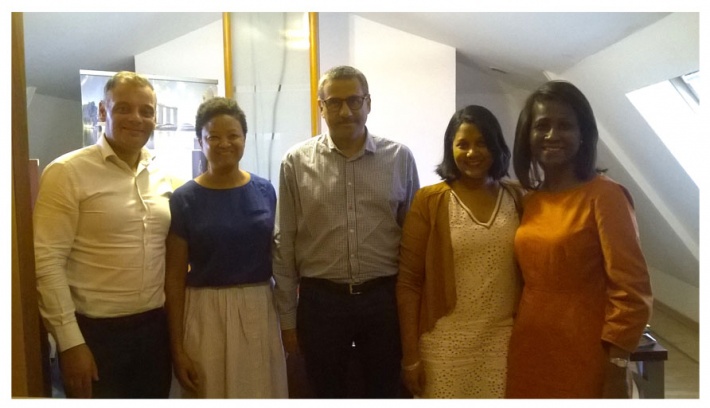 Making the most of her official mission and presence in Reunion, Seychelles Tourism Board (STB) regional director for Europe, Bernadette Willemin, accompanied by Bernadette Honore, STB’s senior marketing executive on the island paid a courtesy call on Air Mauritius team based in the city of Saint Denis.

Potential visitors from Réunion, Madagascar, South Africa, Australia and some 18 other destinations served by Air Mauritius would be having access to Seychelles through the Mauritius hub.

The STB team had the immense pleasure of being welcomed at the Air Mauritius office by Robert Bourquin, Air Mauritius’ director in Réunion and his commercial team.

During the meeting, discussions were held on the importance of Air Mauritius operation in Réunion. They further discussed the connection to Seychelles via Mauritius and the commercial effort in progress on the part of Réunion travel trade professionals to commercialise the route and drive traffic from Réunion to Seychelles.

The STB team welcomed the opportunity to have the MK airline and connecting flight as an option to Réunion–Mauritius–Seychelles.

Mrs Willemin stated that it would open the destination to travellers in Réunion and elsewhere to visit Seychelles.

The team added that the new connection would pave the way for combined packages within the region operated by Air Mauritius airline.

The STB team in Réunion will be collaborating with Air Mauritius to push their marketing plan in Réunion to commercialise the route among Réunion travellers.

Air Mauritius flight will be operating at both Saint Denis and Pierre Fond airports.