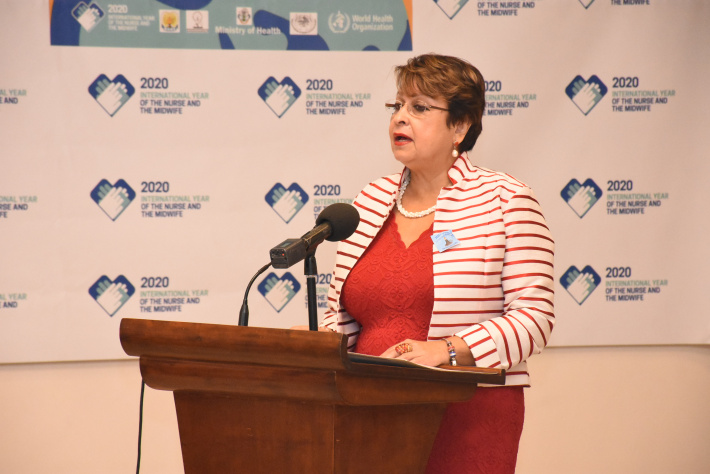 Strong leadership needed from nurses and midwives in our health service

It would be inconceivable to walk in a regional health clinic or the Seychelles Hospital without meeting and engaging with at least one nurse or midwife.

Nurses and midwives are a vital part of our health care system and, globally, count for around 50% of health workforce.

To recognise and celebrate the contributions of nurses and midwives across the globe, the World Health Organisation (WHO) has dedicated 2020 as the International Year of Nurses and Midwives.

It is meant to draw attention to the vital roles of nurses and midwives in achieving the Sustainable Development Goals (SDGs) by 2030 and also coincides with the birth of Florence Nightingale, the trailblazer of modern nursing.

In Seychelles, the year-long series of activities to commemorate the International Year of Nurses and Midwives was officially launched yesterday at the AVANI Resort & Spa by Designated Minister and patron of the Nurses Association of Seychelles (Nars) Macsuzy Mondon.

The event was initially expected to be launched by President Danny Faure, who was present at the start of the event but left unexpectedly during the ceremony.

Also in attendance were Speaker of the National Assembly Nicholas Prea, secretary of state at the Ministry of Health Marie-Pierre Lloyd, ministers, Attorney General Frank Ally and over 200 nurses and midwives, either in active practice or retired.

“Throughout our history, nurses and midwives have pushed us forward for healthier and longer lives; committed to promoting well-being, serving everyone and leaving no one behind,” Minister Mondon stated in her speech.

“Our nurses and midwives stand in the midst of all these challenges; these are the people who devote their lives to caring for mothers and children, giving life-saving immunisations and health advice, looking after all the people and generally meeting everyday essential health needs. They are often the first and only point of care in their communities, they are at the forefront of the epidemic of communicable diseases and non-communicable diseases that is affecting our population and which requires drastic changes in lifestyle and mindsets.”

“Now, more than ever before strong leadership from nurses and midwives in our health service is needed,” Minister Mondon strongly voiced out.

“The World Health Organisation has recently drawn attention to the fact that the world needs 9 million more nurses and midwives to accelerate their attainment of universal health coverage in many countries. Seychelles is mindful of our own diminishing population of nurses and midwives in our hospitals and health centres which remains a barrier to providing higher quality services and programmes.”

“I am happy that the leadership of the department of health, the nursing leadership and the National Institute of Health and Social Studies (NIHSS) are putting robust strategies in place to address the shortfalls.”

Minister Mondon observed that the government understands that the nursing and midwifery professions are changing rapidly, with nurses and midwives expected to lead and contribute to the healthy system in their own rights.

To achieve this, she continued, these medical professional need continuous training and empowerment.

Thus far, 21 nurses have trained at Bachelor’s level and 12 at masters’ level and the government has committed itself to investing a further R15 million over the next three years to train another batch of nurses and midwives at the Chamberlain College of Nursing.

Minister Mondon further announced that nurses and midwives working towards the health of the country should not have to struggle to make ends meet and hence, as from July 1, 2020, the government will increase their base pay.

On her part, chief nursing officer, Guylian Mein, noted that the department of health has since last week set up a team of medical professionals tasked with evaluating the department’s workforce and identify how many more people it needs to recruit.

“We do have a shortage of nurses and midwives in Seychelles which is why we have had to seek the services of expatriate nurses. There are presently around 100 of them,” Ms Mein clarified.

“We have not conducted a comprehensive analysis to evaluate the distribution of nurses in the country; how are they distributed, do we need such number of nurses and the efficiency of their distributions.”

Following yesterday’s launching ceremony, nurses and midwives continued to reflect on their professions throughout the day with presentations and reflections on their journey so far and the collective professional journey ahead. 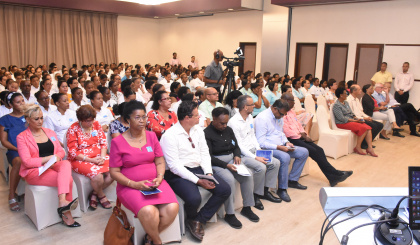