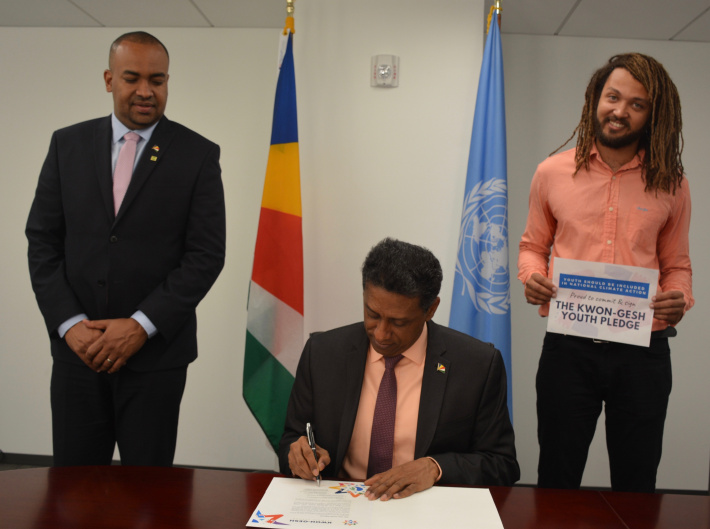 Raguain is currently in New York representing Seychelles at the United Nations Youth Climate Summit held on September 21 as a platform to showcase solutions on climate action at the United Nations, and allows youths to meaningfully engage with decision-makers on the defining issue – climate change.

President Faure met Raguain during a briefing held on Sunday morning at the office of the Permanent Mission of the Republic of Seychelles to the United Nations in New York where he had the opportunity to brief the head of State on his experience so far and was also formally presented with his United Nations General Assembly (UNGA) accreditation pass by President Faure as a member of the Seychelles delegation for upcoming sessions.

Raguain expressed how honoured he feels to be representing his country Seychelles as well as to be privileged to be also attending several side events as part of the Seychelles delegation to the 74th UNGA.

The meeting with Raguain was also the ideal occasion for the president on behalf of the government of Seychelles to join fellow member states to endorse and support the inclusion of youth in climate action policy making actions through the signing of the Kwon Gesh initiative as a critical step in helping to elaborate youth-driven policy focused on averting the effects of climate change. Also present to witness the signing of the Kwon Gesh initiative pledge was the Minister for Environment, Energy and Climate Change, Wallace Cosgrow.

Raguain is a project officer at the Seychelles Islands Foundation and among 100 youth selected out of a pool of more than 7,000 applicants as recipients of a ‘Green Ticket’ to attend the first-ever United Nations Youth Summit in New York on September 21, one that the UN describes as a key milestone ahead of the Secretary General’s Climate Action Summit yesterday.

Photos courtesy of Nadine Jack, Office of the President 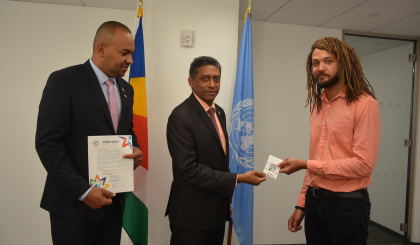