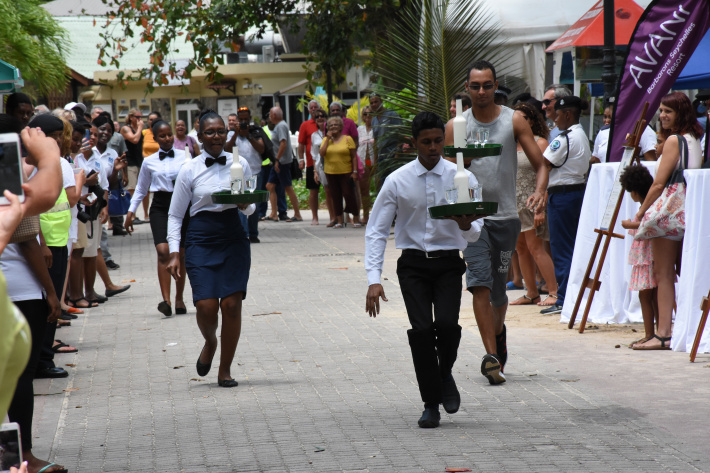 Over 16 esteemed resorts and hotel establishments in Seychelles yesterday took to the Golden Mile at Beau Vallon offering an array of mouth-watering dishes and delicacies at the second Food Fiesta, organised as part of the Tourism Festival activities.

The site came to life early yesterday morning as preparations were underway for the hugely successful food fiesta which last year attracted large crowds of locals and visitors alike.

To commence the activity, employees from the hotel establishments participating in the Fiesta took to competing against each other in a waiters’ race in which they were required to walk or run as fast as they can while carrying a serving tray with a bottle and two full glasses. The first person to cross the finishing line with their glasses still full qualified for subsequent rounds until a winner emerged from the waitresses’ race and another from the waiters’ race.

The event which started at 10am was delightful and had an excited crowd cheering for their favourite contestants and their colleagues as personalities from K-Radio animated the crowds and while others took to sampling the cuisine on offer.

The winner in the waitresses’s category was Shirley Brutus from Kempinski while the waiters’ category was won by Abdy, a fairly new employee from Coral Strand Beau Vallon.

Abdy, a young employee who joined Coral Strand only four months ago, expressed his satisfaction at winning the race especially since he had not made any preparations and had signed up to participate impulsively.

The waiters’ race came to an end with an unscheduled race comprising competitors and representatives from different media houses present to cover the event, where they tested their waiting skills, much to the enjoyment of the crowd.

By the time the race was completed just before lunchtime, food stalls already had a tantalising array of food, snacks and refreshments on offer.

Tacos, hummus and pita bread, brownies and pasta were all available at the Kempinski stall while Banyan Tree opted for Thai cuisine with Gai Phad Med (chicken and cashew nuts) and Massaman Gai (chicken red curry).

The selection of food on offer was enough to make festival-goers feel as if they had taken a trip around the world. Lesser-known dishes such as bobotie, bunny chow and spiced crackling chicken feet were available from Avani. For those who have always dreamed of visiting the pyramids, an Egyptian feast was also being served up, alongside Malaysian delicacies available at the Berjaya stall.

For those who simply wanted some delicious tasting fast food, Carana Beach hotel was the burger shack to visit. Available from their menu was pulled pork and apple sandwiches, fried fish po’boy burgers, spicy chicken prego burgers and beef burgers.

Other dishes on offer included tortilla wraps, barbecued meats and fish from the Hilton group, chicken satay and fried banana from Constance Ephelia Resort and Spa. Refreshments, cocktails and fruit juices were also on sale at the various stalls.

Throughout the day, entertainment was provided by different bands, artists and performers at different locations around the Golden Mile.

Festival revellers could also take a stroll on the beach or simply chill at the beach as they munched on their delicious dishes of choice.

The activity carried on until the evening where it ended with a moutya, well-enjoyed by everyone.

The second food fiesta was also held at Côte D’Or Praslin between noon and 10pm.

The accompanying photos show some highlights of the food fiesta and waiters’ race at Beau Vallon yesterday. 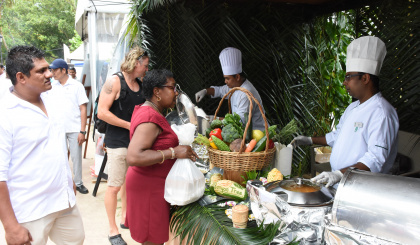 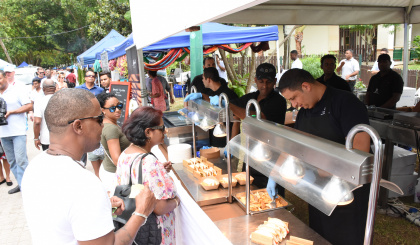 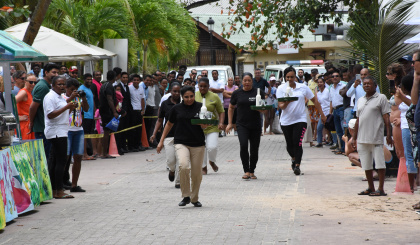