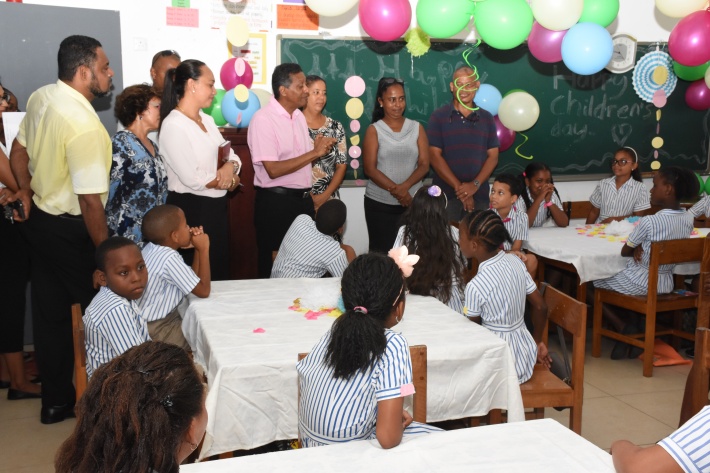 The pupils of Baie Lazare primary school yesterday welcomed an important guest to their Children’s Day celebrations in the person of President Danny Faure.

The visit started at the crèche where President Faure was welcomed by the pupils and their teachers. He interacted with all the pupils in their classrooms.

There are altogether 88 pupils divided in four classrooms – two for year 1 and two for year 2. The President then toured the muddy crèche premises and was shown the play area which was not usable because of its muddy state. Equally waterlogged was the footpath leading to the primary school further up and Ms Monthy enlightened the President on the school’s effort initiated to try and improve the situation and the challenges it is facing.

Leaving the crèche President Faure proceeded to the primary school where he again visited all the different classrooms and interacted with the pupils and the teachers and was apprised of the different initiatives to boost learning. There are altogether some 269 pupils at primary level.

He expressed appreciation for the plant nursery initiative set up with the support of the Centennial Lions Club of Seychelles.

Moïsa Azemia, a special needs coordinator, runs the project together with Gina Jean. Ms Azemia enlightened President Faure on the whole project and the engagement of the pupils who meet to work in the nursery every Tuesday.

“The ornamental plants we produce help to enhance the school’s environment and the vegetables we produce are sold and proceeds go into buying more seeds and saplings for the nursery,” Ms Azemia said while acknowledging the support of all parents and farmers in the community who have donated plants.

At the end of his tour President Faure addressed the pupils gathered for the special assembly. He said this year it is with great joy that he has chosen to spend some time with the pupils of Baie Lazare, a school of which he has some very fond memories. Originally from Les Cannelles in the Anse Royale district, President Faure recounted how his mother, a former teacher at the school a long time ago, used to travel back and forth to her teaching job every day on her bicycle.

“The wellbeing of our children will always be a priority of the government,” President Faure stressed.

He commended the head teacher and her team as well as parents who support and encourage their children for the excellent job they are doing to ensure the pupils get the best from their education.

President Faure has reiterated his call for pupils to take their education seriously and to study hard in order to be successful and realise their dreams of becoming whoever they want to be.

“Commit yourselves to your studies children, work hard,” President Faure urged the pupils.

Commenting on the interactions he had had with pupils from a P5 class, eight of whom eagerly shared with him their dream career, the President said this is clear evidence that a lot of work is being done but he stressed that there is still need to provide a stronger foundation for the young children to stand on and this should be a shared responsibility between society as a whole, communities where they come from and of course their families.

“While a majority of parents are seriously assuming their roles and responsibilities and engaging in their children’s education and helping them with their homework, there are those who need to be more involved and show more interest in their children’s work, encouraging them and in doing so supporting the teachers in their tasks. This is the kind of support and commitment we need from parents otherwise the teachers are overwhelmed as added pressure piles on them,” said the President.

He has called on all parents to embrace their roles and responsibilities and to support the school by engaging in activities organised to boost their children’s education.

Before ending his visit President Faure donated a batch of IT equipment, laptop computers, projector, and speakers to the school.

Following a meeting with the school’s senior management, head teacher Agnelle Monthy said it was an opportunity to enlighten President Faure on the school’s achievements and the different initiatives to boost learning, engage parents and the community more as well as bring to his attention the different challenges the school is facing.

These include maintenance work here and there on the school building itself, on different facilities such as the wiring system which really need a complete overhaul, problems with termite, social ills in the community which have a direct impact on the school and some pupils, lack of interest, commitment and engagement by some parents.

“We have put in place different initiatives such as class meetings and calling them in on a one to one basis but still this is not easy but the school is hopeful that with the support of its council and PTA it will see more positive results,” Ms Monthy affirmed.

“We have welcomed the opportunity to discuss with the President and he has commended and appreciated our progress and shown support for our initiatives and strategies to continue improving learning and raise the pupils’ level,” said Ms Monthy.

“The school really appreciates the presidential visit. It means a lot to us because as a team we are doing a lot to improve our pupils’ learning and boost their achievement level which often go unnoticed but the visit was an opportunity to showcase these at the highest level,” said Ms Monthy who expressed the hope that now all the different maintenance projects already on the drawing board will get an added push and will start soon. 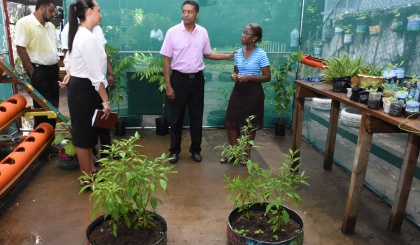 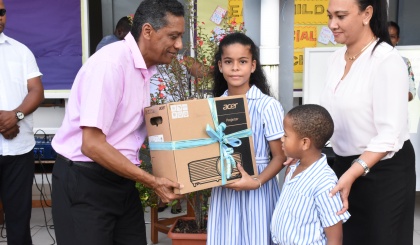 Handing over of the equipment